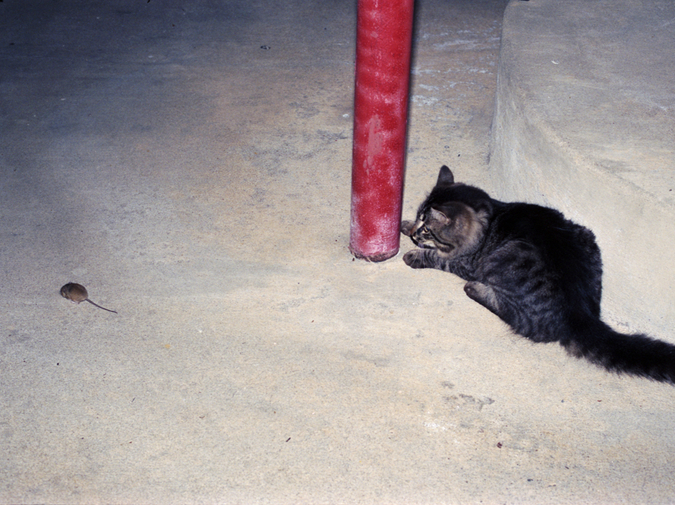 Grey in the corner of my eye. From the kitchen sink to the stovetop, streaking along the top of the speckled granite. Swift. Brown-pink feet a blur. Chewed vegetable rind flecks the countertop next to the plastic compost tub. There are bite marks exposing the bright green flesh of two kiwis in the blue glass fruit bowl.

I want to see the dark grey of mouse under the yellow flange of my baited trap, under an ochre dab of peanut butter. I want the silver spring to snap across mouse fur.

In Berlin, I met an entrancing white rat. Before the wall came down, the city of the West was a crazy amalgam of burlesque, Bohemians, punks, and anarchists. People lingered at curbside tables until two in the morning. They slept until ten, meandered to work around eleven, and returned to the streets at dusk when buskers and performers turned the streets into a fairytale. There were stilt walkers, torch song singers, Brazilian dancers, puppeteers, and fish-netted contortionists.

For hours, I watched a couple playing an old wooden barrel organ. She wore black leather, her hair lavender and pink. He wore black lie-on-your-back-to-get-them-on pants. His hair was short and black on one side and shaved around his ear like a lab experiment, with longer blond hair curling like wood shavings on the other side. From his nest of hair popped a small head. A delicate little face, not unlike the man’s pointed little chin and narrowed bright eyes. "Annabelle Rat" was immaculate in white fur with pink accessories—smooth tail, long elegant feet under her slender body. She did a little pirouette on the man’s shoulders and danced down his arm. I was spellbound. The freedom of these three creatures spoke to me. My holiday was about to end, and I had to fly home to work.

"Come away with us and join our merry band," the dancing creature may have squeaked in her rat language.

"Don't go home to deadlines, your desk with its paper piles, your bills and schedules. Stay a while and twirl."

What small child has not dreamed of running off to join the circus? Here before me was a trio who had created their own street-side ring. How thrilling to be out of the cage, entertaining people and living life emancipated from the nine to five routine, on the edge of the night. It seemed that the characters from my childhood books had come to life.

Rats and mice are dangerous. They harbor the plague, salmonella, monkeypox and streptobacillus moniliformis, which causes rat-bite fever. On the El in Chicago I was sitting near a man who wafted the smell of antiseptic. He was dressed in Rocawear jeans, sneakers and a patchwork leather jacket with Pellé embroidered on the back. But from the jacket sleeve, his oversized forearm and hand stuck out skewed and stiffly bandaged, like Boris Karloff in The Mummy.

“I was at work, man, and this thing bit me. I was in the hospital seven days. They give me IV antibiotics three times a day, man. Could have died. They just let me out today,” he said.

“You know, rats, they don’t have stomachs like we do,” he continued. They just have one intestine.”

I wanted to tell him it was not true, but a commotion broke out when a crazed man boarded the train. Lurching towards me, he shouted, “I love you, I love you, I want to kiss your feet.” I was afraid he might bite them, so I curled my toes up.

A large stand of Malaysian bamboo bordered our old garden in New Zealand. Thick as drainpipes, the tall stakes harbored rats and mice, a hunting ground for our cats Tutu and Tane. They dragged bloody trophies through the cat door, across the living room carpet, up the stairs. We learned to be cautious about sitting down to breakfast with bare feet.

One Friday night, the patriarch of bamboo rats appeared at the kitchen countertop, just as my husband was unwrapping a bundle of fish and chips. Our young son’s eyes were wide as the dinner plates, watching Don Ratticus watching a piece of battered snapper. The rat ran off and hid in a breezeblock holding up my computer workstation, but his dangling tail gave him away.

Theme music to The Godfather begins.

I ask you for justice.

Now I’m gonna make you an offer you can’t refuse. It’s time to sleep with the fishes.

Husband traps the rat in the breezeblock, covering each end with a wooden slat and wrapping wire around it. He plans to drown the rat in a bucket of water, with Son as a keen witness.

I apologize if I offended you. I am a stranger in this suburb. And I meant no disrespect to you, or your son.

It’s time to stop this feud. I want no acts of vengeance. Liberate him!

Some day, and that day may never come, I'll call upon you to do a service for me, like keeping the river rats from my door. But uh, until that day—accept this justice as a gift.

Let me say that I swear on the souls of my grandrats—and there are hundreds—that I will not be the one to break the peace that we have made here today.

Husband carries breezeblock down into the garden, followed by Son. He sets the block on ground and slowly undoes the wire. Don Rat emerges and flees into the bamboo, without glancing back.

The night of the rat liberation is one I am not allowed to forget. If I had grown up on a farm, I would have dispatched the rat, my husband says.

We left our cats behind in our homeland when we moved to Chicago. For years, we lived with no animals, other than the mice that ventured into our apartment every winter. They scrabbled in the walls while I sat at my desk, and scuttled across my feet unless I perched them on the base of my chair. Besieged, I loathed them. Bold marauders, they shimmied like pirates up the toaster cable onto the kitchen table, scattering their telltale droppings like trails of burnt sesame seeds. I found tiny black pellets in my son’s bed and up on his bookshelf. It drove me crazy to think of them trekking across his sheets—the uninvited, the unwanted. I set traps.

That was before the wanted, the invited, the never trapped. My son requested gerbils, tiny desert rats, as a reward for a good report card.

Then he started on his father: “Dad, I’ve done the research…”

He chose two tiny pets and named them Oreo and Pudding. Shell-colored ears folded in like delicate leather baby shoes. Oreo's big cranberry eyes stared out of birchbark grey fur. She was sized between a mouse and a rat. Pudding was petite, a soft feather duster sliding through my fingers. For hours, I watched them. Oreo was slower, stronger, and bolder than Pudding. My son nicknamed her Destructor because she shredded empty toilet rolls in minutes. Once she jumped onto her water dispenser, out of the cage and down several feet on to the floor, when the cage lid was left open. I found her trembling in the kitchen the next morning. After, she became obsessive, licking her paws, cleaning her head and ears repeatedly, tidying the cage, flinging bedding around and digging about in the straw. Change unsettled her.

Pudding was fleet of foot, nervy, and squeaked when panicked. She was coquettish and pretty, with silky fur the color of a penny. My son called her Runner Bean, because she dominated the running wheel in her cage. She ran on it for hours. I imagined she imagined she was bounding across the Mongolian steppes, fleeing from the unwanted advances of Genghis Gerbil, running towards Lawrence of the White Robes. She liked to keep her figure trim, and let her sister eat the fatty foods—sunflower seeds.

When the boys watched football, I chilled with “my girls,” marveling at their manicured little fingers and shapely pink feet. They smelled like sweet straw when I nuzzled their soft little backs and their frightened hearts beat as fast as a hummingbird’s wings if I held them for too long.

I don't know why these little beasties captured me so. My babies were growing up. I lived in a house of males. My sisters lived far away. The rodents became my sister surrogates. Meriones unguiculatus, the “clawed warrior” of the proud order of Rodentia, under the family crest of Cricetidae, had my heart.

One snowy day, we bundled Oreo and Pudding into the car and drove them to a friend for safekeeping while we went to New Zealand. Short-lived safety. I sobbed on the carpeted steps inside Auckland Public Library the day my husband delivered the terrible news. Oreo had bitten Pudding's head off. Two days later, perhaps of remorse, Oreo died. She had never liked change.

An autumn chill overtakes the nights. Mice squirm through the crevices in my house's stone foundations and up through the walls. Occasionally, from my office near the kitchen I hear squeaks. Quietly, I slipper-walk across the hallway. Flash of dark grey. Swift. Into the gap between the stove and cabinets. Gone.

In the dark, at midnight in my bed, I hear the snap of the spring and I wonder at my distinction between the invited and uninvited, the liberated and the caught, the cosseted and the dead.

Toni Nealie is the author of The Miles Between Me, an essay collection about homeland, dispersal, heritage and family, published by Curbside Splendor. Recent essays have appeared in Guernica, The Prague Revue, The Offing and The Rumpus. Her essay "The Displeasure of the Table" was nominated for a Pushcart Prize. Originally from New Zealand, she holds an MFA from Columbia College Chicago. She teaches, writes in Chicago, where she is Literary Editor of Newcity.