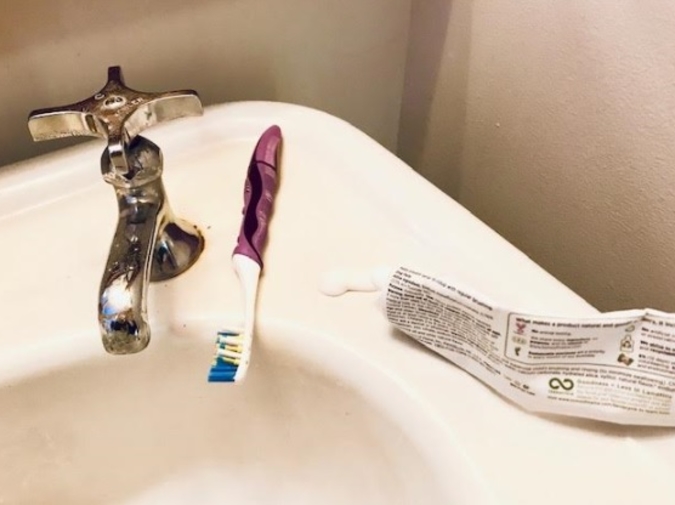 Lacey had solid, therapist-vetted explanations for her youthful follies, most alluding to daddy issues, including having been inappropriately exposed to pornography via her father’s videotapes left cued to the ‘good parts’ in their VCR.

As a girl, she felt too embarrassed of her pullout couch, alcove ‘bedroom’ to invite friends to sleep over when her father was out, and he was out a lot, resulting in her spending hundreds of afternoons and evenings alone in their small apartment.

She enjoyed playing with her worn out dolls until her plotlines either got too boring (Peaches-N-Cream Barbie goes shoe shopping and to the dermatologist) or too weird (Malibu Skipper goes next door to ask Boba Fett to borrow a cup of sugar and they end up sixty-nining for a spell before settling on a spring wedding).

When the dolls went stale or made her feel self-conscious about approaching thirteen, she’d vet potential outfits for the coming week of hideous middle school, commandeering vintage 60’s tees from her father’s shirt drawer and giving them Flashdance cuts at the neck and shoulders. Sometimes she’d take a shower and sing Joni Mitchell songs about cloud illusions, and painted ponies, and sitting in a park in Paris, France, and then she’d wrap herself in her father’s ancient, paper-thin, fringy Turkish fouta, crisscrossing it over her budding breasts and tying it behind her neck like a fancy dress before rimming her upper and lower eyelids with her two-for-a-dollar, electric blue liner.

A lengthy stare in the mirror revealed to her an arcane beauty that would certainly extend itself from the steam-framed bathroom vanity to the wide world outside just as soon as she lost twelve pounds.

You could earn some extra money by helping Mrs. Hardwick and I over at the candle shop, taking inventory…Oh Mr. Hardwick, what could I ever do to repay you? You'll think of something,

Decades later, Lacey would ask her therapist, “I mean, did I just destroy my own innocence or what?”

And her therapist would respond, “What else would a child do but investigate and familiarize herself with such provocative and conspicuous artifacts?”

Dumbstruck by the validation, Lacey exhaled thirty years of attrition.

Head. Always, she gave them head.

She gave it without questioning her own lack of climax, or considering the notion that just kissing one another’s lips and touching bodies might be satisfaction enough. The way she saw it, if a boy gave her the gift of his undivided attention, she had a debt to pay.

When her therapist asked, “What attracted you to a boy then?”

She couldn’t think of anything more than, “His liking me, I guess,” a sad admission that inspired her therapist to coin her, The Little Matchstick Girl of Puppy Love. A boy would notice her, and then tentative as a fertile peahen, she’d position herself in his vicinity and allow him to strut and brandish his plumage, encircling her, teasing her, feigning disregard, until his mouth turned up in a naughty grin, and, greatest pleasure of all, his eyes trained on her, Lacey-as-locus, passing her on his way to the keg with a purposeful shoulder bump and a mercurial, ’Sup? The only thing differentiating him from his fellow male animals in the wild were the opposable thumbs that enabled him to grip his red Solo cup and guzzle foamy beer.

By college, Lacey learned at least to feel a personal attraction, but she fared no better. She fell hard for the boy who manned the front desk at the school’s fitness center. Gym Boy had intense black eyes and shoulder-length, honey brown hair that he raked backward with his fingers while reading a worn copy of Breakfast of Champions. He swapped the usual pop-music they looped in the gym, and instead he played his own CD’s of Bauhaus, Patti Smith, and The Velvet Underground. And when the free-weight meatheads in their billowy, tiger-striped muscle pants lumbered over to bitch about it, he smiled and said something they must have found reasonable, because they nodded, patted his back, and ceded back to their benches.

One day, when she handed him her student ID card, he popped his brows, widened his smile, and welcomed her by her first, middle, and last names. Then, he held onto her card when she went to retrieve it, and said, “Hang on. I just want to get a better look at you,” which forced her stomach to flip-flop like it had that time she fell through the ice of the park pond back home, only at the fitness center desk, what lay beneath was thick and warm and deliciously perfect.

A few flirtatious, gym visits later, he asked her to walk him out to his beater, Volkswagen Beetle (swoon) to play her, “a kickass song,” and one note in, they were kissing, like it was a sport, until her lips chafed.

The second time they left the gym together, they made it all they way to his bed.

They took time to talk and finding each other funny, they laughed. He propped up his pillows and they snuggled and munched on dry Cinnamon Toast Crunch and watched recorded episodes of Seinfeld on his VCR. His body was smooth and muscular, and his neck smelled clean and male with faint traces of Cool Water by Davidoff, and after her third visit to his bedroom and their hat-trick blowjob, bathroom, snuggle, snack and Seinfeld sequence, he told her she was crazy sexy, which Lacey saw as a prime moment to nurture the love growing between them with a bonus round that for some reason took twice as long as the others.

She looked better and better to herself in his bathroom mirror as she washed up and got all ready to spend the night with him in his warm bed, but when she returned, wearing the pink and black satin, Victoria’s Secret PJ’s she’d blown two weeks worth of babysitting cash to purchase for just such an occasion, Gym Boy stood up out of the bed, shook his head a little, and instinctively, she examined herself for elements of the grotesque: a sudden white-head, uncovered fat roll, or spontaneous burst of menstrual blood...“Hey, uh, we should talk,” he said, raking his hair.

Gentle admissions segued into simmering defenses and ended in Gym Boy accusing Lacey of using his toothbrush, calling the act disgusting, because the bristles were left wet with her mouth germs, and to boot, she had squeezed his toothpaste tube from the middle rather than fastidiously smoothing it up from its tail.

Lacey denied his charge, coyly at first, then fervently, and finally tearfully, swearing up and down that she’d, “never even fucking touched your stupid fucking tube of fucking Crest.”

“Oh, really? Then how’d you know I use Crest?” said the boy who’d taken no pause when inserting his tongue and penis into her virulent mouth.

They left things at, “Whatever,” and sat next to each other on the side of the bed for a moment’s dire silence. Lacey’s heart clawed at her ribs like she’d tripped on a staircase and bumped down the last half on her ass. She dressed and gathered her things, sweating under her breasts into her armpits, as Gym Boy sat back on his bed, crossed his legs at the ankles and pressed play on another Seinfeld, training his stare at the TV as she left his door open and power-walked through the communal area of his dorm-suite, where his three roommates sat passing their purple dancing-bear bong and playing Sega, doing their stoned-best to muffle their laughter.

She fled to the rear of the chilly campus shuttle and put on her headphones, beseeching Joni Mitchell to console her—Who needs the static? It hurts the head. And you wind up cracking, and the day goes dismal—as she wept for her own degradation. She’d been so sure, back then, that it had been Gym Boy who’d rendered her dirty and dumb.

Six months after splitting with her husband and farther into her forties than she ever believed she’d actually be, Lacey spent the hour before picking her daughters up from Tae Kwon Do carting four-hundred dollars worth of groceries around Whole Foods and scrutinizing her gender tenure.

She sighed, loaded her organics and gluten-frees up onto the checkout belt, and smiled at the clerk, a teenager with a silver bar mutilating the septum of her otherwise adorable button nose. She searched the girl’s environs for some root of power, a cogent novel or half-read newspaper, a political t-shirt, just any shimmer of valor or purpose to legitimize Lacey’s erstwhile sacrifice, but as Lacey filled the conveyor belt, the clerk thumbed her Instagram so intently that Lacey had to clear her throat to rouse her to ringing up the food.

One day, cupcake, Lacey couldn’t help thinking, you, too, will want to “tape your regrets to the microphone stand.”

Lacey ran into Gym Boy at a college friend’s forty-fifth birthday party. He looked great, fit and healthy, with a rare, full head of hair, though cropped short now. When their eyes met, he made straight for her, wearing his familiar wide smile. They hugged, chatted, laughed.

He ‘got it’ about her separation, himself years divorced, also with two daughters. They talked about their kids and their jobs over the first drink, and about their splits and sorrows through the second. Lacey confided how hurt she’d been after that last night in college, and as she spoke, the sting felt so fresh she clenched her jaw not to tear up. For a second, he seemed to jive, but then, too soon after her admission, he winked and said, “I should bill you for the physical therapy. Y’know, my shoulder never really healed.”

Lacey told him it was nice to see him, that she wished him the best.

“No,” she said simply, and delighted to mingle with other friends at the party, she never gave him another thought except to tell their host that back in college, during their short-lived ‘thing’ she totally used that guy’s toothbrush, all three times, and though she couldn’t recall, squishing the toothpaste from the middle sounded just like her.

Janna Brooke Wallack's short fiction has been published or short listed by upstreet (#10), American Literary Review, Glimmer Train Press, PoemMemoirStory, The Lascaux Review, The MacGuffin, The Furious Gazelle, Penman Review, Carbon Culture Review, Blue Lake Review, among others. Her first novel, The Family Jones, is represented by Victoria Sanders and is on submission.