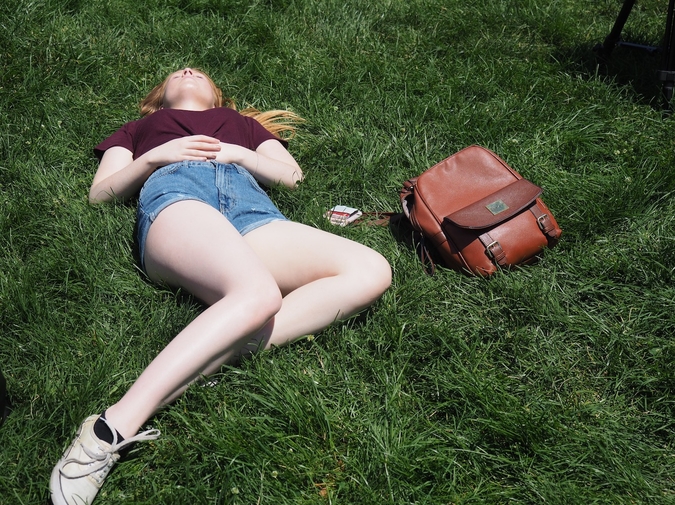 There was still nailpolish on her toes and fingers. A dark shade of pink. Her thin finger was wrapped inside a band-aid. I noticed a long scar on her right knee it must have been from surgery of some kind. She could have torn her ACL or needed a knee replacement. The collagen of her skin fibers puckered up leaving a raised, pronounced scar through the knee. Gently, I grazed over her scar. The skin was cold to the touch, like smooth rubber. It was tougher than I expected. We had to be careful, our professor only wanted us to cut the epidermis and dermis. As an old lady, her skin was paper thin. I cautiously placed the tip of my scalpel on top of her thigh and pressed. After making my first incision, I repeated the movement carving out a square pattern. With tissue forceps, I pinched a corner peeling back the skin. In my other hand is the scalpel which I used to cut away connective tissue to detach the skin.

Dr. Robert Knox needed a body. He looked out of his 19th century window at all the susceptible bodies. He noted the way they walked, the way they swung their arms, how they shifted their gait from foot to foot. He could make the next medical breakthrough. If only he had a body. He had returned to his hometown of Edinburgh to begin lecture anatomy at the Royal College of Surgeons at Edinburgh University. Edinburgh during the 19th century became a hotspot for anatomy. Scottish law required that corpses utilized for medical purposes must be obtained from the bodies of prisoners, suicide victims, or from orphanages. But Dr. Knox couldn’t wait that long. He promised his students a live dissection. A full demonstration on fresh anatomical subjects he said, according to folklore. He couldn’t let his students down, he wouldn’t let his students down. He would find a body.

The smell of dead bodies permeated throughout the room. Filling our nostrils, burning our eyes until a single tear is shed. We are nose deep into her thoracic cavity. The rib cage has been successfully removed to reveal her lungs and her heart. Her heart was smaller than I expected. In fact, it was the smallest heart I have ever seen. Granted, I haven’t seen a human heart before. We are trying to detach her lungs. Cutting away sloppily at the pulmonary ligament we finally hoist the lung free. Raising it from its cavity like Simba from the Lion King. A guy from my lab group held up her right lung in his hands. The three lobes of the right lung flapped around as what once held them together was no longer there. He held it like he would a baby cradling the apex in one hand and the base in the other. The black fluid leaks out staining his blue latex gloves. He looks up “Man, this class is really teaching us to be good serial killers.” I laugh uncomfortably as he squeezes out the excess juice.

A lodger at William Hare’s house died. His cause of death: edema or commonly known as swelling. He died before paying his rent. Hare bemoaned the loss of money to his friend, William Burke. He needed the money to fuel his boisterous drinking habits.

“What did you do with the body? Burke inquired. “I haven’t move it yet.” Hare responded. They went to the upstairs room where the lodger stayed. Hare and Burke stood over the body, watching and deciding. “I think I might know some local anatomists that might be interested in a body.” Burke said, speaking up. A few of the Scottish anatomists felt stifled by the rigid laws about cadavers. “I wonder how much they would be willing to pay for it?” Burke said, smiling at Hare. Hare smiled back, “Brilliant”. I imagine that the pair shared a maniacal laugh or two after that.

Later that day, they went to the local carpenter to acquire a coffin. They managed to get the parish to pay for the burial. During the dark hours of the night, the pair opened the coffin, removed the body--which they hid underneath the bed in Hare’s home--and resealed the coffin. They arrived at Edinburgh University scrounging for a purchaser. A student gave them directions to Dr. Knox’s office. Dr. Knox happily relieved the pair of the body, paying them a substantial amount. Burke and Hare split the payment. As they left the university, one of Knox’s assistants told them that the doctor would be glad to see them again when they had another body to dispose of. They took the hint.

My job was to work on the upper thigh muscles. I sliced through the deep, investing fascia. Underneath revealed the stringy angry red muscle. Muscles strike an eerie resemblance to pulled pork. I took a blunt probe and tissue forceps to raise rectus femoris. Rectus femoris is a thin stripe down the middle of the leg on either side more muscle. I couldn’t see vastus intermedius which is underneath rectus femoris. I would have to cut it. My hands began shaking as I picked up the probe and scissors. I could feel tiny droplets of sweat collecting in my gloves.

Don’t mess up I tell myself. I attempted to steady my hands by flexing my palms and rubbing them on my jeans. Here we go. I used the probe to raise rectus femoris, my hands tense up. Then I grabbed tissue forceps to mark where the beginning of the tendon is--I don’t want to cut the tendon--my hands are around the forceps in a death grip. I placed the scissors at my marker point and press down. Rectus femoris was successfully snipped. I peeled back rectus femoris to reveal vastus intermedius. With the probe I cleaned away the spider web like fascia to get a better view of the muscle. I sighed with relief. “Good job” one of my lab partners says. I felt validated.

They were lucky the first time. A lodger died of natural causes. The next time around they would have to force it. Burke and Hare had a method. Lodgers frequently stayed at Hare’s home, making it the perfect breeding ground for fresh anatomical specimens. Meat and bone for sale. Burke would charm the victim with whiskey, getting them considerately drunk. Hare suffocated while Burke lay across their upper torso to restrict movement. Male, female it didn’t matter; a body is a body. Dr. Knox took them all with delight. Every penny well spent he said. All 16 bodies were put to good use by Dr. Knox. All 16 people.

There is a tradition done in gross anatomy. The first day of lab, we introduce ourselves to our donor and say thank you. Thank you for willingly donating your body to science so that pre-med students can pick, probe, and dissect without your donation we would be loss. From their selflessness, we can learn. We introduce ourselves because the relationship between student and cadaver is an intimate one. In our hands we hold the most personal, private parts of them. Dismembering a person for the sake of knowledge carries a weight with it. They deserve to be treated with respect. They are more than just a bag of bones held together by fascia and muscle. The further along in the dissection it can be hard to distinguish between meat and person. But they had families, friends, people who they loved, people who loved them. They are people. Thank you is what we say to our cadavers, our donors, our bodies.

Growing up, Gabriella Giambanco was an avid reader of anything she can get her hands on. Naturally, she began writing her own stories. Her creative nonfiction, opinion-based essays and fiction have appeared Bustle, Bust Magazine, CLASH magazine, Thought Catalog, The Tunnels (at NAU), and elsewhere. She graduated from Northern Arizona University with a degree in Biomedical Science with minors in chemistry and Spanish. When she is not reading anatomy and physiology textbooks or spending time in the cadaver lab, she can be found writing.