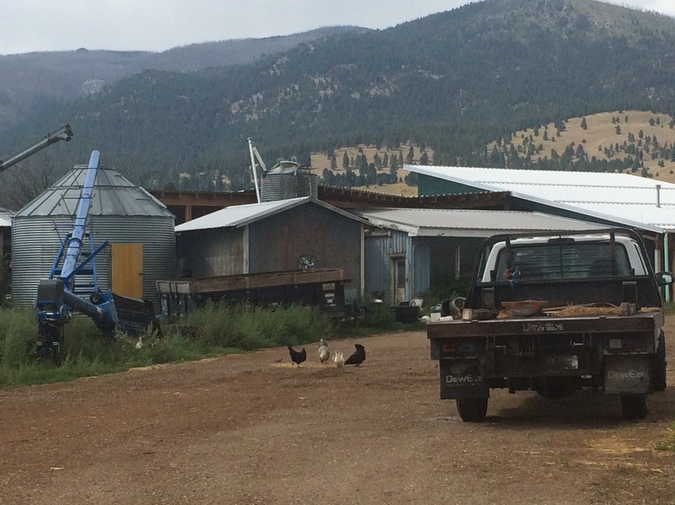 Eva sleeps for too long and loses continuity. Heat like Melatonin, waking into a déjà vu that thickens. She’s in the passenger seat of Mike’s pick-up truck. The state highway is lined with pinwheels and white crosses. Her hands are on her purse. Her nails are sugar wafer pink. The AC is dead. So is her phone. She’s almost out of Xanax but she takes one anyway. Mike is driving with one hand at the bottom of the wheel and the other out the window. It’s too hot to worry about where they’re going or what they’re going to do when they get there.

“Evangeline,” Mike says. Eva opens her eyes. They are parked on a red dirt drive outside a house. The house is wedged between what used to be pastures, now wild fields hemmed with barbed wire. From a single utility pole, three black cables descend to an electrical box. The house sits up on cinderblocks and is adorned by only patches of white paint and a screen door. This is the first place she and Mike had lived together. Some of what they’re doing comes back to her. She brought them here to find something that had been left behind in the move. A lot had been left behind because they had moved quick, but Eva remembered something and she insisted it was important and now they are here to find it. Eva sees the past in the way that a prophet or an oracle might see into the future, in fleeting images freighted with significance. As for what it is she’s looking for, she’ll know it when she sees it.

“You awake?” Mike asks her. He speaks to her like a stranger though they’ve been dating for seven years. It’s something in his voice; words formed in the front of his mouth instead of his chest, like he’s trying to be polite to one of his customers at Autozone. He’s got a beard going these days, looking like an American folk hero. Until he smiles and shows his bad teeth. He’ll learn to stop doing that eventually. He’s soaked in sweat already and all he’s done is drive. He must know what they are here to find. His memory is better than Eva’s, or so he lets on.

The house is empty except for light. And the paper wasps that make their nests in the drywall and around the shattered apertures of the windows. They hum through the air in lilting arcs. Eva walks to the kitchen, white sneakers already taking on the color of dust. It feels like the set to a TV show she used to watch. But she can’t remember any of the jokes. She can’t remember what happened at the end. Any specific memories are compressed into vague unease under the pressure of the pharmaceuticals. She opens the cabinets one by one. There is nothing but a roach trap in the corner. Coming here was part of a plan she’d formed but all her intentions have tangled like fishing line and become submerged. She runs her fingertips across the dust on the kitchen counter and leaves three streaks.

“There ain’t nothing here,” Mike says, appearing in the doorway to state the obvious.

“We should give up,” Eva says.

“Your cousins might have moved some of the stuff to the barn,” he says. He scratches his beard.

They walk the edge of the pasture along a narrow dirt path. Mike leads, his shoulders hunched forward, sweat spreading across his work shirt. He says nothing to her. He used to talk to her all the time, a constant flirtation. She knows he can still do it because he flirts with every other woman he sees. He will flirt with the fat girl with the nose ring at the CITGO. He will flirt with high school girls at the pool of their apartment complex. He will flirt with Eva’s mother, though hates her and would never spend time with her without coercion. And all he has for Eva is this silence or questions he already knows the answer to. Though sometimes, when they’re lying around on Percocet, he’ll joke around with her about whatever’s on TV. Like he’ll pretend that David Duchovny or Jennifer Anniston is talking to him and he’ll respond like he’s in the show. It’s never really funny in retrospect, but she likes it at the time.

If there ever was a barn, it’s gone now. Instead, in center of another overgrown pasture is a semi-trailer, surrounded by chicory and pokeweed.

“Want to check that out?” Mike asks without looking back, already moving toward it. Eva follows him. Her hair is frizzed with sweat; she can see the blonde tips curling into her peripheral vision. She can’t remember the property being so large. The sky seems too close to the land, the palest summer blue.

Eva stands in the knee-high grass and watches Mike leverage his weight against the rusted mechanism on the door. His huge hands against the steel. It seems impossible that he will have any effect but the lock gives and the door swings open. A deeper heat wafts out, a smell of sawdust and varnish. Eva steps up with Mike to see into the darkness. The entire container is packed with furniture, boxes, mattresses. It looks like someone was going to move and didn’t. This is clearly too much to deal with. If whatever she brought them here for is even in there, Eva doesn’t care.

“We should give up,” Eva says. But Mike starts to move a box spring out.

“It’s packed too tight to search. Gotta clear some of it out,” Mike says.

They spend the afternoon moving things out of the semi-trailer and into the grass of the field. Some of it must be furniture they left behind, but it’s mixed in, and Eva can’t say for sure what was theirs. They don’t speak, but they work smoothly anyway, moving the larger items together. Mike’s willingness to help is not new. He behaves like this all the time. He accomplishes tasks Eva lays out for him. All she had to do to get him to come out here was say she left something at the old house, which they hadn’t seen in years and was three hours away on the other side of the state. He said his afternoon was free. Now they are moving a sofa together in ninety-degree heat. She wants to just ask him what they’re doing here. She wants him to remind her why she had them come all the way back here. But she can’t. The pills keep what could be a spiral of emotion in check. It’s as if her sadness, her panic, has been printed and laminated and handed to her. A useful thing to know.

Taking a break from emptying the trailer, Eva sees two horses in the next pasture over. They look like the picture on the box of one of the puzzles Eva and her mother put together. Sitting at the dining room table with a bottle of Chablis, connecting one piece at a time. It always seemed like a waste to Eva when her mother swept it back into the box. She used to let them sit out overnight. But now, she puts in the last piece, looks at it, cleans it off, and puts the table cloth back down.

Mike, covered with sweat and bug bites, yellow jackets circling him like electrons, picks through the drawers of a dresser.

“Is this yours?” Mike asks, holding up a wrinkled sundress. Eva doesn’t know if this is what she came for, it doesn’t seem like it. Maybe Mike forgot too and they’ll be out here forever looking for something nobody knows.

“I don’t think so,” Eva says. Mike folds it and puts it back in the drawer. The next thing he pulls out is a comb.

“Got it,” he says and tosses it to her. Eva is surprised by the weight of it.

In the passenger seat, her body feels tracing paper light and her hands are a bloodless white from moving furniture. She runs her fingers over the worn spine of the comb. There are three blue rhinestones on the side. She didn’t expect to find this comb and she doesn’t know what to do with it now. It’s a bone comb that Mike found at a thrift shop. He gave it to her for an early anniversary, but she can’t remember the exact one, or what he said, or where they were. There’s nothing connected to it, as she must have hoped. But as they drive, as the tires hum beneath them, she remembers more layers of her plan. She had used the comb to get them out. She had hoped that when they saw their old house, their old things, they would remember how they were before, when their love was on the surface. When people would see their love and speak about it as if it were a physical thing. But it’s been too long. The history here fades quick, like the colors on a magazine cover left on the dashboard all summer. Nothing keeps. She can’t blame Mike that he doesn’t love her anymore. She glances at him. And it’s his face, even with the beard, that finally brings a memory back as clear as if it had been the moment before. Mike says: “like this.” He’s eighteen. So is she. They’re on a rented boat on Lake Jocassee. He does a looping cast with his fishing rod. The curve of the line catches the sunlight for an instant, like silver thread. Then it’s gone, taking seven years with it.

Joseph Worthen is a writer from South Carolina. He is currently a Ph.D. student at the University of Louisiana and his fiction has appeared in The Master’s Review, Wag's Revue, Bodega, NOÖ Journal, and more. His website is www.mezacht.com.