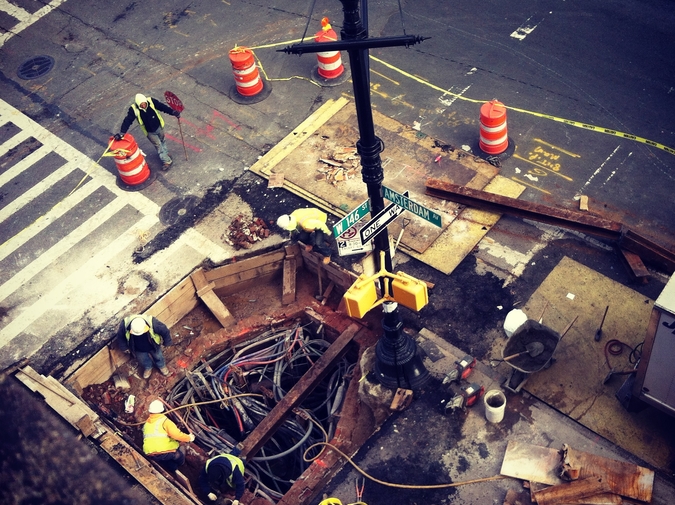 When I buy my ticket to Tbilisi, I’ve known Sasha three weeks and we haven’t yet had a fight. It’s the same amount of time he knew his ex when she bought her plane ticket to move with him overseas. We joke that he moonlights for the Eastern Europe tourism board, importing Canadian women to the Georgian capital.

I like Sasha because I think he’s crazier than I am but I’m surprised when after our first fight―a misunderstanding over the word “solipsism”― he declares that the relationship is a mistake. He demands that I cancel my plane ticket, and that we break up immediately. I watch him weep into his hands and declare that I will never understand him. Sasha has on numerous occasions stated his fear of being misunderstood stems from immigrating to Canada at age thirteen, when he was stolen away from his home and his friends, and I try to be sympathetic to this. He cries and shouts, and I apologize but it won’t reverse his proclamations that everything is wrong, the relationship is imperfect, he’s fucked up and needs to be alone. I consider calling my therapist for phone coaching, but am afraid of being judged.

“You shouldn’t have done that,” he tells me. “That was the wrong thing to do.”

I cry and feel stupid, and then turn on him. I accuse him of black and white thinking. I tell him he’s fucking crazy, that he’s the one who needs to get help. I tell him I’m on his ex’s side, that he’s a forty-year-old baby. While crying did nothing to change him, yelling at him is effective. He snaps out of his rage fit and spends the night holding me in bed. He whispers that we’re cuddling against the odds, and when I take too much of the comforter he says I “stole the warmth” from him. In the morning, he tells me he hasn’t slept at all. He says my eyes look like a wolf in the night. He tells me loves me back, that he was scared of saying it, and he apologizes for hurting me.

We agree to take things slowly, but he’s leaving in three weeks. The next time we fight at a concert, it’s because he tells me not to get too drunk, and again I turn on him. I tell him not to tell me what to do, that he’s an addict, and I never remark on the six or seven joints he smokes a day, two of which he made me carry in an empty mint tin only to be confiscated by security at the door. Again, he tells me to cancel the flight, this time adding that we were crazy to think it would work, that it’s too fast, an echo of his past relationship, which he’s still traumatized from.

“Why do you have a boyfriend?” he asks. “You should have a fear instead.”

He goes to his parents’ house for a few days and I cry in therapy. The longer he’s gone, the more I feel like I can breathe. One day, a small voice tells me it’s for the best. The next day, he asks to meet for dinner and we get Korean food but don’t kiss. The day after, I accompany him to the dispensary. We agree not to date, that I’ll come to Tbilisi as a friend. After smoking a joint, we agree we can still have sex. Everything will work as I don’t talk about the terms of the relationship.

We spend more and more time in Vaughan. I avoid my friends, exaggerating to Lauren the time that I’m away so she won’t ask to hang out. We walk the suburbs and he shares his fascination for the decay of new materials.

“No one knows how new alloys decay,” he tells me, tapping the iron grating of a fence that weather has stripped away to reveal a chalky white core. “I could be the first person to write a thesis on this.”

I make a note to fact check these claims, which feel spurious, but never get around to it. He gets too stoned and backs his parents’ SUV into their garage, racking up three thousand dollars on their credit cards. I skip therapy. I ignore Lauren until she sees pictures of us at her ex’s opening and sends me a slew of angry messages, telling me it is “hilarious” to see me “click attending” on Facebook events I never would have known about before. I ignore the messages of apology and her phone calls over the next few weeks until unfriending her on Facebook.

I don’t cry when Sasha takes the subway at Spadina and Bloor to the airport. When he lands, we have sex on video chat and he jokes we’re being watched by Georgian Secret Police. He switches apartments three times, unable to find a living space where his allergies aren’t triggered. He cries in frustration. He tells me he loves me and I say it back. He demonstrates for me how he sucks his own dick, taking a yoga pose on his sofa, and flexing his body back onto itself. I tell him I want everything with him, and when he panics, I clarify I only mean anal. He tells me he’s attracted to all his Georgian friends and wants to sleep with them. He doesn’t want to be so codependent on me. He says our relationship isn’t healthy, that he wants to fuck other women, and maybe men. We renegotiate the terms of our relationship. I send him our horoscopes. I send him a poem I write and he tells me I sound like a confused person. He asks me to tell him what I want from him, and he’ll tell me what he can’t give.

We talk on the phone every afternoon before he goes to sleep halfway across the world. We argue and he tells me it scares him that if he were more abusive, I would allow it.

“I think I’m doing a bad thing and you’re letting me do it,” he confesses.

I tell my therapist I’m going to Yerevan instead of Tbilisi, which she buys only until she looks at a map. I skip most of the homework for the unit on interpersonal relationships. I’m dropping out before we begin studying distress tolerance skills, but I already have a strong grasp on mindfulness and squeezing ice cubes to stop suicidal ideation from my stint with the crisis therapist post-ER. I stop drinking for my last month in Toronto, and then start again the final week. I start sleeping with a friend I’ve had a crush on since coming to Toronto and I make a joke about never giving up on my dreams. I don’t text Sasha for a day and he gets jealous. When friends ask me why I’m going to Eastern Europe, I tell them for the club scene.

On my last day of dialectical behavioral therapy, there are Timbits for Belinda, who is graduating, and the question, “What does your Wise Mind think about this?” for me. On the flight to Tbilisi, I tell myself it was either kill myself or go to Eastern Europe, and I chose Life.

Cassidy McFadzean lives in Toronto. Her work has appeared in magazines across Canada and the US including BOAAT, Diode, Fjords Review, and Prism International. Her new book of poems is Drolleries (Penguin Random House).