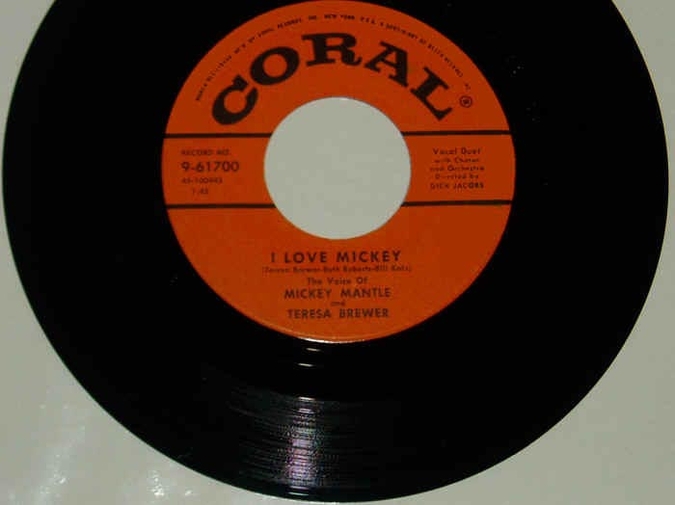 VII. A leathery bartender closes my tab after an extended evening of bourbon consumption. He hands me the bill to sign, then quickly pulls it back.

"It's wild, right?" I roll my eyes. "I think there's a ball player with the same name. I hear he's a total babe." He looks me up and down. I am wearing a blue dress and a smirk. My hair is pinned back with my grandmother’s pearl barrette.

The man perched on the stool next to me laughs a sweet, warm laugh. He turns to me, rolls up his sleeve and reveals a small tattoo of the Yankees logo. "I'm guessing your parents are die-hards, too," he says. "It would seem we have the same disease."

I grab his arm and smile with all my teeth. "It is a beautiful, beautiful disease."

When we finish exchanging war stories and another round of drinks, I pull him by the loops of his jeans into a kiss and onto 3rd Avenue. In the taxicab there is more kissing, some light hair pulling, and utter disregard for seatbelts. The driver mutters to himself, feigning disinterest, and turns up the pop station. As we pull onto the Manhattan Bridge, we are supine, splayed across the grubby narrow expanse of the backseat.

The song that plays each time Derek Jeter steps up to bat comes on the radio and New York reveals its beauty and coincidence for the several-thousandth time.

VI. On the final evening of our friendship, I bring Melissa Thomas home to work on a History project. As she crunches through the crimson trail of October leaves leading to my front door, I consider warning her, but decide against it.

In the living room, the 60-inch television is switched on to Game 7 of the ALCS. An alter above the fireplace bears seven tea lite candles, a baseball signed by the 1961 Yankees, a framed Lou Gehrig postage stamp, and the cap my father wore to the Reggie game in ’77—the night he met my mother.

My father barrels across the hardwood in his underpants, wielding a Louisville Slugger with Graig Nettles’s name burnished into it. My mother sits primly in the armchair, wearing a Tino Martinez shirt, legs tucked beneath her.

“Mickey!” he yells when I walk in. “Get to your post! Quick! We need all the help we can get.”

Fourteen years of carrying around the burden of my name and the legacy behind it have become heavy like a chain around my neck. I sigh, begrudgingly cram my flimsy 1998 World Series cap on my head, and take my ceremonial spot on the couch.

“Maybe I should go?” Melissa whispers.

“No! Stay where you are!” my father yells. “This is not a democratic household and I am not a rational man. This is post season. Don’t ruin the mojo now!”

Aaron Boone steps up to the plate. My father grips the Nettles bat and springs over to my mother’s corner.

“Rub this bat!” he cries. “I have a feeling this schmuck is going to do something!”

When the ball sails over the wall, the fat base of the Nettles bat pops and crunches seven jagged holes into the ceiling. We are screaming and dancing in a circle when Mariano collapses on the mound and Melissa slips out the door, crying and covered in plaster.

The living room will forever boast crooked recessed lighting—a monument to the night we staved off the Red Sox another year. It will be a decade before I bring another friend home.

V. Terms are being tossed around the house and I sit quietly on the floor in the living room, collecting them like Topps cards. Cirrhosis of the liver. Transplant list. Eulogize. They televise the funeral of the man I was named after and my parents sit hunched on the grey expanse of the sofa, faces cold like slabs of stone.

A clip of the other Mickey Mantle comes on the screen. He is gaunt; beckoning viewers not to look up to him, not to call him a role model. My father scoffs and murmurs into his fist, "Too fucking late."

Roy Clark appears holding a guitar to say goodbye with the song he promised to Mickey. He croons that the time has come to pay for yesterday when he was young.

It is the first time I see my father cry.

IV. On my first day of preschool, five round tables are set up with tiny name cards, the names of the children neatly printed on each one. All the girls have flowers on their name cards; all the boys have baseballs on theirs. I find my name on a baseball card, and take my assigned seat.

The girl next to me looks over and loudly informs me that I am a boy. When I tell her she is mistaken, she points out I was given a boy's name card: if the card says so, it must be true.

I endure a barrage of mocking until the day it comes my turn for Show and Tell. I bring an old 45 single my father gave me and announce to the class, "This is a song written about me."

Teresa Brewer's "I Love Mickey" blares from the tiny plastic phonograph speaker. They hear my famous name over and over and it shuts them up for good.

III. My father—sporting a backwards cap, a catchers mitt, and a Thurman Munson mustache—stands next to the doctor, holding a camcorder so heavy all our home movies come out on a tilt. My mother—feet up in stirrups, covered in rivulets of sweat—threatens to belt him if he does not come take her hand. My blue layette, purchased months before from Hy Friedman on Bragg Street, sits neatly folded on a side table next to my father's box of "It's a Boy!" cigars.

I arrive in grand fashion. I am the thrill of a lifetime, a misinterpreted sonogram. I am a girl. It is the greatest joke I will ever pull off.

My father laughs incredulously, removes his cap, rubs his forehead. "Doc!" he says. "You told us the baby was a boy. We were naming him after Mickey Mantle!"

I weigh 7 pounds and 7 ounces. My father takes this as a sign and neatly prints my name on the forms. My birth certificate reads Mickey Mantle Rose Newman. I am a girl named Mickey.

Hours later, the three of us sit perched in the hospital bed, waiting for the game to begin. "Mickey's first baseball game," my mother coos down at me, swaddled in a pinstriped blanket. "And it's a World Series game!"

The sound of the ABC announcers’ voices careen towards my ears for the first time. Then: rumbling, panic, static. 3,000 miles away, the earth's plates are grinding against each other. The announcers are gripping each other's arms in the broadcast booth and Interstate 880 is crumbling.

The Bay Series is postponed two weeks, and I spend the rest of my life telling people how the world shook when I came into it.

II. In row B, seat 11 sits the boy who cut his teeth on the series of the early sixties, who in his wallet keeps the June 8th, 1969 ticket stub from Mickey Mantle Day next to his newly minted drivers license.

In row C, seat 9, sits the girl who slept with a toy beaver named Bucky after the shortstop. She finds herself passing the time between innings anxiously running her fingers through her long hair, imagining she were running them through the hair of the boy seated in front of her.

In the eighth inning, Jackson strides to the bat and she begins to chant with all her capacity: REG-GIE, REG-GIE, REG-GIE. The boy turns around, smiles at her, and mightily joins in. The chant spreads like influenza and the Bronx is rattling when Charlie Hough’s knuckleball is driven into the stands. Instinctually, they turn to each other, grabbing arms, jumping, screaming.

When the game ends, they rush the field together, yanking up fistfuls of grass and dirt, aching in the most primitive way to hold onto a piece of the evening. He gets billy-clubbed and she gets pulled away kicking into the air. He catches the train back downtown alone.

He drags himself back to his family’s Bensonhurst apartment to find the slim shadow of his mother, perched by the tiny kitchen window, smoking a lipstick-stained cigarette and scolding him for getting home so late. He comes bearing a plastic bag of infield dirt and bruised limbs.

“I let you go to the World Series, you break your curfew. You're always looking for trouble.”

He smiles, gripping the bag of dirt tighter.

“I found more than trouble,” he promises. “I found the girl I’m going to marry one day.”

I.  Seven years outside the day he touched down at Normandy, a soldier palms his hair and takes a deep breath. He is clutching a scorecard and has a pack of unfiltered Lucky Strikes rolled up in his sleeve.

She is unlike any of his other blind dates: as soon as she was out of her mother’s sight, she lit up a cigarette and freed a cascade of long dark curls from her pearl barrette. At the game, she tosses peanut shells and spills her beer while she heckles the A’s.

The new kid steps up to bat, returning after being sent down to the minors earlier this season. This time, he is wearing number 7. “I have a good feeling about this one,” she says, without looking at her skeptical soldier. “I have excellent intuition when it comes to baseball.”

When the rookie knocks it out of the park, she turns to the soldier and kisses him for the first time.

When the game ends, they walk out of the stadium hand in hand and into the steamy night—the latest, but not nearly the last, in a long line of hearts destined to be left on 161st Street.

Courtney Preiss is a fiction writer and music journalist living in Brooklyn. She holds a BFA in Writing, Literature, and Publishing from Emerson College. Her most prized posession is a signed photograph of Ralph Branca and Bobby Thompson. She tweets@cocogolightly.