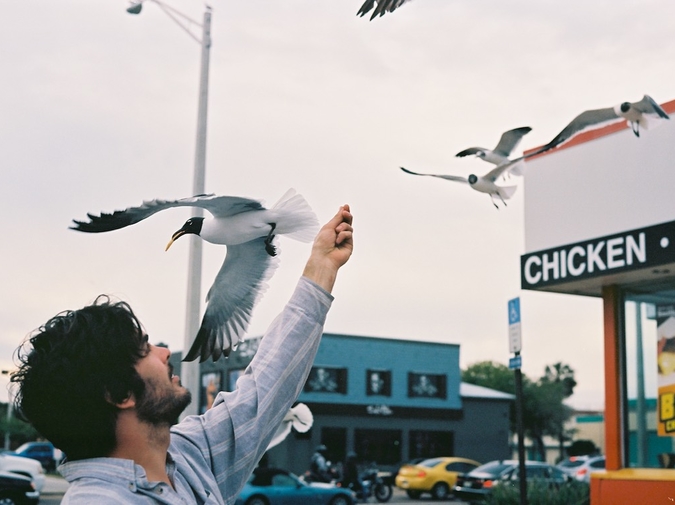 Moments before we depart for his fifty-fourth birthday bowling extravaganza, King-King decides he would rather eat lunch at Fat Nancy’s—the chicken spot near the interstate with the broken gas pumps and strip club-tinted windows.

“But what about your roommates?” I say. “What about Russell and Phillip and Malcolm and Jorge?” They had gone once before, I knew, each resident having mentioned the fun they had had to me at one point or another—the funny shoes they wore, the pitchers of soda they drank, the strikes they bowled owing to a metal shoot the teenager who sprayed the bowling shoes set up for them—and I wanted that for them again, especially for King-King.

So, before responding, I attempt to place myself inside King-King’s life: to lock myself away in his little room, move through his pre-planned days at program blanketed in a Klonopin fog, with no family or friends or love life to speak of.

And I realize: Who am I tell this man he must go bowling on his fifty-fourth birthday? Who am I to say that, since he is mentally disabled, he cannot be an asshole if he likes?

So, leaving the other residents behind, I take King-King to Fat Nancy’s. He sits behind me in the bucket seat as I drive. “Isn’t this exciting!” I say into the rearview. “Isn’t this going to be fun?”

However, King-King’s face remains as long and sad as ever—even as I pull into the gravel lot of Fat Nancy’s.

A door chime chimes as we enter, the heavy windowless strip club door giving way to a restaurant that is empty save one obese woman with a wonky eye that gazes off toward a clutter of country road Sofa art while her good eye regards us without blinking.

“Cock-a-doodle-doo,” I say, hoping to make her stop.

“Cock-a-doodle-doo,” King-King says, still unsmiling, and finally she does.

Fat Nancy picks up two menus, knocks them once on the countertop and waddles off toward a corner booth that appear upholstered with recycled tires.

A griddle hisses through a jagged square that looks cut in the faux wood paneled wall with a chainsaw while we follow, air quality acquiring more of the salty humidity of a bog with every step. The white squares of the peal-and-stick checkerboard floor underfoot have completely yellowed, their corners delaminated and curling upward.

While King-King and I shimmy in, Fat Nancy hovers over us with her mini-golf pencil. A slick of grease glistens on the uppermost of her chins: “So, what can I get you and your beautiful wife?”

Hearing that, I knee-jerk open my mouth to correct her. Then I close it, noticing a faint tremor in King-King’s mouth. Finally, I say, “Can you give us a minute to decide?”

And as Fat Nancy waddles off, I watch the heavy curtain of King-King’s upper lip come lifting to reveal too much gum, but also something different—a new man, a winsome man who, after all these years, has suddenly stepped into the life he wants.

Seeing that, I cannot help but smile. I cannot help but follow along into King-King’s new reality and project the love a married woman might project into the smiling face of her husband: “What do you want to order, dear,” I say.

And King-King picks up his menu. He studies its words like he could read every one and never once looks up for me to help him—because, today, King-King does not need my help. Today is King-King’s fifty-fourth birthday, and he can smile and read words and not go bowling if he wants.

Eventually, Fat Nancy waddles back, hovers over us while King-King continues studying the menu, making nonsense words with his mouth. She leans in, unable to make out what he is saying. Growing impatient, she says, “So, what’re we having?”

“Spaghetti, Spaghetti, spaghetti…” And as King-King’s little-boy chant continues, Fat Nancy’s good eye ticks toward me for an explanation.

I point to a random entrée, and add, “It says right here: spaghetti”

“I assure you you’re both mistaken,” Fat Nancy replies.

“Spaghetti,” I say, still pointing and reading the menu like it does.

And so then there we are—husband and wife—chanting “Spaghetti” at Fat Nancy when the door chime chimes again and another patron enters: An old man with a chicken gizzard neck and a tennis-ball-footed walker who does not appear strong enough to pull himself inside Fat Nancy’s heavy windowless strip club door.

“Cock-a-doodle-doo,” the old man says, his breath already thin and raspy from fighting with the weight of the door. He curses and wheezes some more as he reaches out with his walker out, managing to pull himself about an inch or so forward.

He reaches out again, pulls—but is still nowhere close.

Now Fat Nancy is saying something to me. And out of the corner of my eye, King-King has picked up his fork and knife and stuffed a paper napkin into the collar of his shirt. But I am too engrossed with the precarious scenario unfolding at the door to respond.

The blood burns brightly in the old man’s face as he reaches out again, pulls himself another inch forward—maybe less now. His twig arms vibrate over the walker. He reaches, pulls again, but under the weight of the door, it is useless. One way or another, it is clearly going to shut.