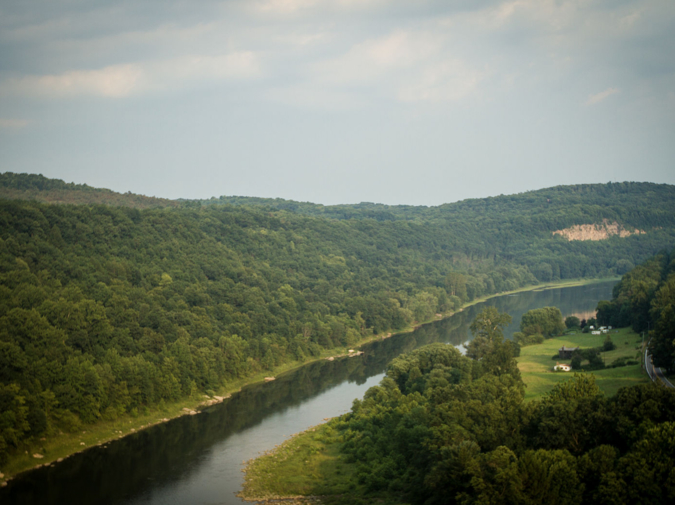 One Friday evening long after the West-Central Pennsylvania Tag-Team Championship match and the Anything-Goes matches, Killer Sheila found Mike Pipes crying in the mop closet (the janitor’s closet, really) off of the locker room of the Altoona Area Shriner’s Hall. His face was streaked with tears. Metallica blasted from a boom box in the locker room. The cramped space smelled like mop water and chemicals. Looking up at her, Killer Sheila appeared like the grim reaper holding a bag of ice; sweat glistened on her taut face, her hair dangled in clumps, and she wore all-black spandex with a cartoon skull on the chest.

He bit his hand hard like the pain would stop the crying. The tears had come out of nowhere. This had happened a lot lately.

He braced for Killer Sheila to call over the other guys—King Stacked Maxx, Benny, all of them—but she slipped into the closet, pulled the door shut, and crouched. It was too dark to see, but he could smell her, and she smelled like pickles. He could feel her breathing.

He could’ve reached out and touched her.

When you live alone and don’t have family and what you think of as friends are merely those thin associations of other people occupying the same space as you, you can go days without anyone touching you, even on accident. Of course, Mike Pipes never told King Stacked Maxx or Benny or Minny “The Marvelous Mind” or certainly Killer Sheila—the best wrestler he’d ever seen—or any of the other wrestlers he wrestled Friday nights at the Shriner’s Hall that he was a wrestler because he wanted to be touched. Slapped. Grabbed. Twisted. Lifted. Head-locked. Tossed. Dumped. Dropped. Suplexed. Pinned, the weight of another body pressing against him, the sparse crowd roaring. There were other reasons for wrestling—he’d grown up watching Junkyard Dog and Andre the Giant; as a kid he’d wrestled with his older brother and his older brother’s friends, but a lot of people did that. He didn’t think it was a sexual thing, the touching, but outside of wrestling, he couldn’t remember the last time someone had hugged him or pulled on his penis or held his hand, let alone brushed past him at the grocery store or leaned a shoulder into him on a crowded bus. Weeks. Months. He’d wrack his brain for the most recent moment, and when he would think of it—or some ghostly image resembling it—he’d find himself thinking of it over and over like someone desperately recalling their first kiss. He’d paid for the touching before at one of the nude dance clubs on 22 toward Pittsburgh, but that left him feeling sadder like someone had reached into him and hollowed him out.

Sometimes a plumber in Altoona called him up to pull copper pipes out of condemned houses in Altoona or Tyrone. He went to the library and read the President’s tweets and the people tweeting back at him. He’d get so lonely reading those tweets and writing letters that would never be mailed to those thin associations of friends, so many people, but never touching. But Mike Pipes let himself get thrown around the ring Friday nights, small-circuit wrestling, the washed and the washed-up, and his back hurt and neck and his feet hurt—he wrestled in sneakers, which probably wasn’t great, and jeans or sweatpants, just whatever he had on. A wrestler of the people. He made twenty-five dollars a match. He was never champ. He made other wrestlers look good. He could take a fall. He was happy to.

Killer Sheila walked with a limp, but she was graceful in the ring, strong, she fell hard and sold it, and she was good on the mic. Everyone loved her, everyone wanted to wrestle her. The crowd whooped. Obese men in XXL T-shirts of 90s bands dropped to their knees in mock proposal as she limped to the ring, her sandy hair pulled back hard. During the day, she limped around the city and ticketed cars past the meter.

Mike Pipes wrestled Killer Sheila often. She liked that they didn’t have to choreograph much beforehand, and the crowd seemed fine with her beating him at the Hall almost every week. One time in the ring, when Mike Pipes fake jabbed her, she produced a yelp that nearly sent Mike Pipes to crying. The sound was like a child in a trap. As the audience showered him with boos and popcorn, Mike Pipes thought about her boyfriend beating her. Or he was pretty sure of it. He’d heard the talk and saw the bruises on her face and ribs when she changed in the locker room. She caught him looking one day and hissed at him to turn around or she’d make him turn around. But fake-fighting her, seeing her grimacing face, hearing that yelp, how could he not think of some man—maybe in the jeering audience—producing that same sound from her at home? Grabbing her by the hair? Choking her? And maybe days later, maybe hours, sleeping with her? In the ring, Mike Pipes grabbed her, whipped her around and clenched her in an arm bar, and he leaned close and through gritted teeth whispered, “Sorry.” Why didn’t she just hurt hit him back? She could hurt anyone she wanted. Didn’t she know she was the best wrestler he’d ever seen? But Killer Sheila twisted up her face, fought out of Mike Pipe’s hold, grabbed him, turned him around like turning a potted plant, lifted him—the crowd roaring—and drove his face into the mat.

He should’ve let himself be counted out right there, the crowd whooping. Everything in him told him to not fake-beat a beaten person, but he staggered to his feet, shouting at Killer Sheila for more. She turned to him, her eyes narrowed. His lower back felt like it had been punctured with an ice pick, but an energy rushed through him. It was like warm blood. Someone giving it to him. They didn’t need it. He did. They had plenty. He had nothing.

She grabbed him and lifted him again—the sound from the crowd a birth sound, he’d write days later in a letter—and she drove his face again into the mat.

His neck snapped back.

A pattern had started. The last few times he and Killer Sheila wrestled, he’d kicked out of pins over and over. Their most recent match, last week, he’d kicked out so many times that she hissed in his ear to quit it, but his heart was racing; he knew he was using her, but he wanted that warm feeling, blood transfusing into him, and so Killer Sheila finally cracked his head into the ring post—darkness—and pinned his still body.

He woke in the locker room in a daze, and that’s when she told him she was leaving soon, something about a van and going to another state—Ohio or West Virginia or Virginia—and she said some other things about her kid, Gil, but Mike Pipes was somewhere else and he felt like he was someone else, a teen at a party, the kid who didn’t yet know he was a loser—big teeth, rare haircuts, smelled bad—the loser who still hung around at these parties like he could win them over, and most girls wouldn’t talk to him, and guys wouldn’t talk to him, and the guys who did they called him “Teeth” (teenagers are unoriginal), and bet he wouldn’t do stupid things like pee on the floor and lick it up. He should have just cried right there on his hands and knees, but sometimes when you want to cry, when you need it, you can’t cry and the tears solidify and turn to pain.

Anyway, tonight, the night Killer Sheila found him crying in the closet, and stepped inside, crouched—she smelling of pickles—and pulled the door shut to darkness. He heard what sounded like a bag of pebbles shifting in the darkness, and then he felt the bag of ice set into his hands.

“Can you see me?” she whispered, finally.

He shook his head no, then pressed the ice to his forehead, then he realized and said, “No.”

“Is your head okay?”

He shook his head no. Pain throbbed behind his eyes, and it felt like his nose was stuffed into his brain.

“What do you cry about?”

He looked ahead in the darkness. He knew one of her eyes drooped and the ear on that side was cauliflowered like that side was another person’s side. When she was checking meters, she kept her hair down to hide this.

“Do they know I come in here?”

“I mean, sounds like a dying elephant in here.”

“You know I’d never cry in the ring.”

“I know. I wanted to say goodbye.” Then she said something about Ohio or West Virginia or Virginia, but Mike Pipes barely heard her. He was somewhere else again. He was licking up pee or getting beer cans thrown at him. Or he was just alone, which was maybe worse. Her stuff was all packed in a van. She said something about her kid. That she’d probably hate her forever for doing this.

“Hell you talking about?”

He shook his head.

It’s like he wasn’t there. He could stay like that forever. This is what being dead is like, he thought. Dead, but alive. “You’re the best wrestler I’ve ever seen.”

“What’s wrong with you?”

Everything was. “I said, You’re the best wrestler I’ve ever seen.”

He heard her breathing.

“You should know that,” he said to the darkness. “You need to know that whatever he does.”

He braced to be grabbed or punched, but nothing happened. He heard nothing. He could be stuffed in a well. In solitary confinement. He really could be dead. There’s just nothing. You want to cry, but you can’t, or not anymore, and you realize, finally, crying is the only thing you ever had, and you want it suddenly like someone wants love or touch, another person, so you don’t have to be lonely anymore. Or say you’re not lonely. Can you want all of that? Is it okay to want all that?

His voice came out like he was at the bottom of that well: far from himself. “I can’t.”

He wiped his nose. He could hear his own breathing. He wanted to say he was sorry for using her—to try to explain his icky intention of stealing her touch in the ring—but also for not doing more to help her. He couldn’t have it both ways. He hit her in the ring, weekly, and everyone booed and threw popcorn, and nobody did anything about the hitting. Why would they? They even came back the next week for more. They paid to see it. Wrestling was fake. A dramatic comedy with stunt people in costumes. So why did he treat Killer Sheila’s life as fake too? Like she could walk away from a beating in her shabby apartment and laugh about it over beers.

“I’m crying too,” she whispered.

He listened to his breathing.

He pulled back at first when he felt her fingers on his cheek, wet, and, just as he leaned into it, the feeling was gone. A paint can scratched the floor, the door opened, and light sliced into the space like a blade coming for him. Then she was gone. He squeezed his eyes shut, but he didn’t need to.

Casey Wiley’s work has been published in Epiphany, Barrellhouse, Gulf Stream, among others. He teaches writing in the Penn State University English Department.