In the Crypt of the Cathedral 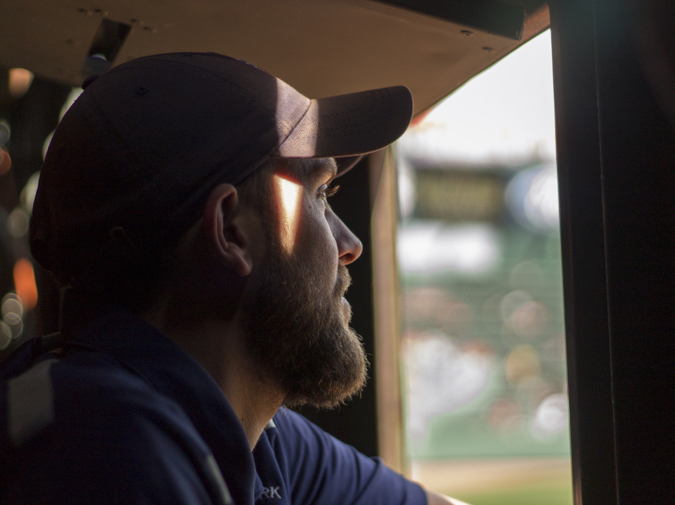 “You can’t pee here,” Brendan tells me as I climb inside the doorway leading into the belly of the Green Monster. What he means is that you shouldn’t pee here. Manny Ramirez did once, during the seventh inning of an endless game against the Orioles, but he was the exception. Brendan says Manny used to poke his head in all the time. Thinks he got bored playing left field. His antics made him a fan favorite anyway.

There is no die-hard fan like a Red Sox die-hard fan. My grandfather was neck-and-neck with Fenway Park itself when it came to being there for classic moments, and he relished them like they were personal triumphs and failures. He’d seen it all: Ted Williams’s stunner of an All-Star game in ‘46. The crowd rushing the field in an exuberant mob when the Sox clinched the American League pennant in ‘67. Yaz’s victory lap around the park to usher in his retirement in ‘83. The ball rolling cruelly between Buckner’s legs in ‘86.

But the Curse of the Bambino and all the ensuing heartbreak never made a bitter fan of my grandfather. Whenever Ramirez pulled some new stunt, my grandfather would shake his head and let out a whooping laugh, “That’s just Manny being Manny.”

Once you’re in, you’re in. There’s a single squat door leading to the cave behind the scoreboard, and when the door shuts and the game starts, you’re not getting out (even for a pee break). No lights, either. No AC. No heat. Just a six-foot-wide dark expanse between the third baseline and Lansdowne Street. There are only two hand-operated scoreboards left in the major leagues, and this one hides its outdated construction from the prying eyes of most fans.

June is coming in mild this year. It’s a balmy 66 degrees, and I’m shivering in the perpetually shaded hollow between metal walls. The only light sneaks in from little metal slits where the scoreboard operators can look out onto the field, casting broken rectangles onto Brendan’s face. I ask him about the best part of his job in this coffin-like cubicle. “Meeting all the different players,” Brendan tells me simply. “And we got a great view of the game.”

I spend Red Sox games out in the stands wearing an awful yellow polo, pestering fans to let me take their photo and selling them the honor of keeping it for an obscene price. They rarely buy. I hardly ever see a pitch as I’m weaving through the crowd and Rocky-running up cement steps. The consolation is seeing parts of the park my grandfather could never dream of.

Today I’m off duty working on a personal photography project. Brendan and I discuss poses and lighting. I lift my camera and take a picture of him looking out one of those little windows with the famous field blurred in the background and him in focus.

Every inch of the concrete supports and green walls have been graffitied by visitors to this secret clubhouse. The earliest names are written in chalk, some so faint I have to take Brendan’s word for it that these were famous players who wanted to leave their mark.

“Now everybody gets to come in and write their names,” Brendan laments. “People come in with Sharpies and write over stuff without thinking.” For a pretty sum, bachelor parties and high-rolling fans can come in, take a peek, and scribble their signature too.

I scan the walls, looking for a yet-untouched spot. Brendan has agreed to let me add a name too, as long as I don’t write over anyone important.

Eleven years ago, in a post-op room at The Brigham, my grandfather and dad stayed up late to watch Manny and the other ‘Idiots’ secure a spot in the World Series by winning three nail-biter games against the Yankees. His illness generously paused for those late October nights as he watched his team win their first World Series since 1918. It was the ultimate absolution of every fumbled ball and missed home run. Nine months later, his body burned out as a constellation of cancer cells.

A sharp clang! jolts. I jump back and scream, thinking a gun has gone off or a support beam is giving out. Brendan smiles at me. The Angels clearly aren’t pulling any punches for batting practice.

“That’s what it sounds like when a ball hits the wall,” he explains, and goes back to setting up the hand-painted metal score plates. What you can’t see from the oldest seats in baseball are the relics of almost home runs: Each time a ball hits the scoreboard, it lays a white and red kiss against the matte green paint of the wall.

Right underneath the window where Brendan had been eyeing the field, my eyes land on a pristine space, prime for a signature. I look out the hole onto the emerald grass unfolding in front of me, rolling to third base, and landing on an already dirty home plate.

I take out a Sharpie from my back pocket. It squeaks as I unleash the tip. I write my grandfather’s name thick, forever giving him the best view of his beloved ballpark.

Alicia Winokur is a graduate of Mount Holyoke College and lives in Boston with her very noisy cat. Her poetry has appeared in Glass: A Journal of Poetry, Synaesthesia Magazine, and is forthcoming in Crab Fat Magazine.