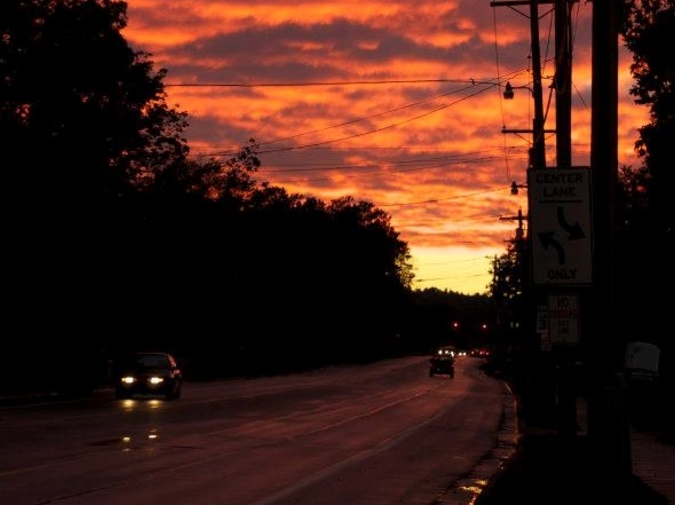 See that cross. Here’s a story. One night in the tedious plains of Colorado, Abraham Lincoln drove his Model T into an embankment and flipped it into a fiery blaze. He had a wild streak spread wide as a Texas bull’s horns and whiskey brought it out in him like an Alka-Seltzer fizzing up water, something he took every morning to alleviate the digestive woes that whiskey also brought. Sizzle. He smacks his lips, grimacing at the riverwater aftertaste. The sun gleams inside of him.

He drove with fire in his eyes and his chest full of howl, wind curling his prospector’s beard. Rising, he kept one hand to the wheel and the other to the bruising sky, fingers groping for lightning. His flesh clung sparse to his skeleton, his coattails flapping behind him. He was the goddamned fifth horseman of the apocalypse. He screamed gobbledygook to the wind stolen by the wind anyway. A boy, he wanted to be a preacher but lost religion when he found God. He speaks to the pigs and the chickens and the cows while they nose into seed, into grain. He tells them, do unto others.

Was he wearing his glasses? Didn’t need ‘em. Was he wearing a hat? He hated hats, except for that battered old Stetson he owned for three days. Blown right off his head on a roller coaster at Great America. Never found it. Poof. Never found his body. Poof. We who lived on those tedious plains generally assumed he was still there in a state of some disintegration. But some say he lurched to his feet. Some say he wove into the night, warbling classic Britney Spears to the cottonwoods and the cattle in the dark wet. Some say that eight months later it was he who popped up in Independence with a clean shave and a teetotaler’s stare and went on to become the goddamned President of the Benighted States. Twelve, thirteen. Sleepless, he lies in bed under an electric blanket counting the shapes on the ceiling. Forty-nine, fifty.

Emily Dickinson Goes for a Drive

Emily Dickinson comes upon the scene of an accident. By the time she gets out of the car there is nothing anyone is able to do. The child is dead. She sits in the street and cradles the crying man. The blood is not his but she holds him like it is. His eyes are full of fear. Bombs are falling in them and will not stop.

Three months after that, Emily Dickinson drives alone across Nebraska. Every road is the same road and she will never leave it. She keeps pace with hulking semis hurtling with her down the interstate so close they all seem frozen. Cottonwoods line the slow brown rivers, enormous furcate brains laid bare to scorched nerve in the face of winter. She changes lanes to avoid the body, a splayed turkey, tail over its head in an obscene flip of feathers. Oh God, she thinks. Please don’t let me end that way.

Three months after that, Emily Dickinson arrives at the sea. She waits in the car for a long time, already hating the feeling of sand in her shoes, and she hates it more once she stands at the mouth of a cold shallow river flowing into ocean. Come on, says her boyfriend, standing in the flux of tides. His legs are hairy pale sticks protruding from his rolled up pants and really, she’s disgusted. He grins at her, arms out. It’s easy, he says. Just take off your shoes and cross. She has never seen him so young. She can only think of all the dirty things in the water, of all the little ways people die.

Penny Anderson still wants to be an astronaut when she grows up.