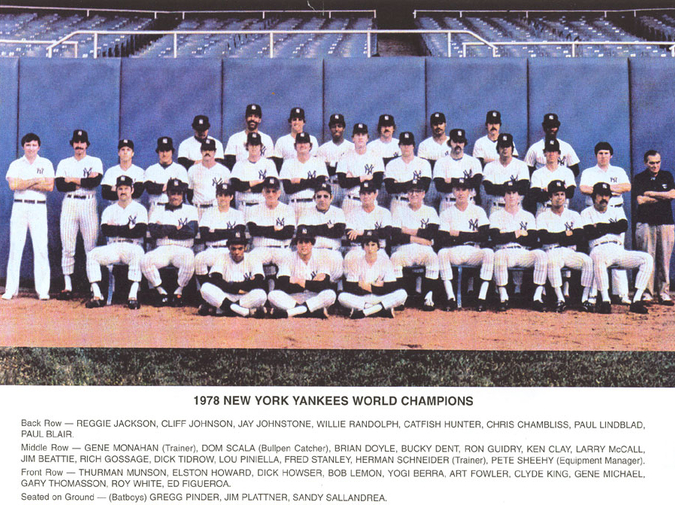 There is no bond quite like the one Yankees fans in New England share. If you look closely, you can find them—wearing NY emblems beneath lobster bibs, sprawling across Cape Cod beaches on pinstriped towels, getting heckled by cashiers and passersby. They are comrades behind enemy lines.

My father and I are among these secret swaths of Yankees fans in New England. We’ve spent eleven summers as a family on Cape Cod and I did four years in the heart of Boston for my undergraduate degree. We are posted up on the side of Training Field Road in Chatham, Massachusetts, getting ready for a late morning run when I start to feel the weight of the late August malaise I’d been hoping to stave off for another couple of weeks.

By now, the lighthearted thrill of the game has already begun to give way to the aggressive undertow of the looming postseason. And this season carries greater heft: I am being throttled towards my last month of Derek Jeter, the shortstop of my youth who has been a Yankee for the two decades I have lived to be a fan.

I sit in a sullen, static stretch as my father continues his marathon-honed stretch routine, all the while reciting the speech Mickey Mantle gave on June 8th, 1969—the Mayor-Lindsey-proclaimed “Mickey Mantle Day”.

“This is not only a great day for me, it’s a great day for all the Mantles,” he murmurs in a put-on Oklahoma by way of Brooklyn drawl. “My wife Merlyn, my four boys, my mother….and I wish my father could of been here but…” he affects the dulled sound of a wild ovation.

I have some bleak predictions that I've kept tucked away in my chest. While my father does his push-ups, I sit in a lazy half split and decide now's as good a time as any to ask. I tilt my head back and pierce the clear blue sky.

"You were seven years old on Mickey Mantle Day," I say.

"I know. My point is, you were very young when your favorite player left the game. Eventually Mattingly came along and he was your favorite, but you were older than me by then. And besides, it’s not like the Yankees knew true glory until after he was gone.”

How can I admit that the thought of Jeter leaving feels oddly identical to the sensation I’ve had fearing the loss of the men I’ve loved—crippled by my own certainty that the magic would be sucked right out of a room if they were to leave it?

"I'm wondering if I can ask you for a prediction for 2015. Some advice for when Derek Jeter's gone. But now I don't know if you even have a proper situation to compare it to. What if next season rolls around and I'm too sad to go to a game?"

He takes pause from the stretching, sits back, looks up.

“I do have a scenario that compares, but it’s not a literal translation and you’re not going to like it. How many games have you gone to this year?”

“Thirty,” I squeak back.

“I was averaging about thirty games a year when Thurman Munson was killed. And I didn’t think about it until you just asked me, but I didn’t step foot inside Yankee Stadium for five years after he died.”

As the color drains from my face despite the eighty-degree glow of the day, he can tell he’s made a grave misstep in what should have been his attempt to quell my anguish. He is quick to recover:

“Baseball was great before and it will be great again. Give your fear as little mental real estate as possible. Besides, who can predict what next season will hold?”

As we tear off down Old Queen Anne Road, my back bakes like a hot stone in the sun. Munson’s number 15 feels like lightning stretched across my spine.

A man tearing up the road towards us comes closer into view, flashing a wide white smile. He is one of us: wearing a Yankees cap, tipping it in my direction, and winking like he knows something I don't.

Staring out the window of my office on Broadway—surveying the ever-evolving landscape of 30th Street I lovingly refer to as the last slice of Mayor Lindsey’s New York—I can finally feel the sun on my face and count the days left until baseball season on my hands.

In between meetings, I open my inbox to see my father has sent through an email that holds our ticket confirmation.

“See you on Opening Day in the Bronx,” he writes, with one last prediction: “It’s going to be a beautiful spring.”

Courtney Preiss is a scrappy Jewish girl from Brooklyn. Her essay, "The Boys of My Youth (Baseball Seasons 1989-2014)" was recently named a 2014 Best of the Net finalist, and she is currently adapting the essay into a baseball memoir. Catch her mourning dead celebrities on Twitter: @cocogolightly.