Here I Am Lord 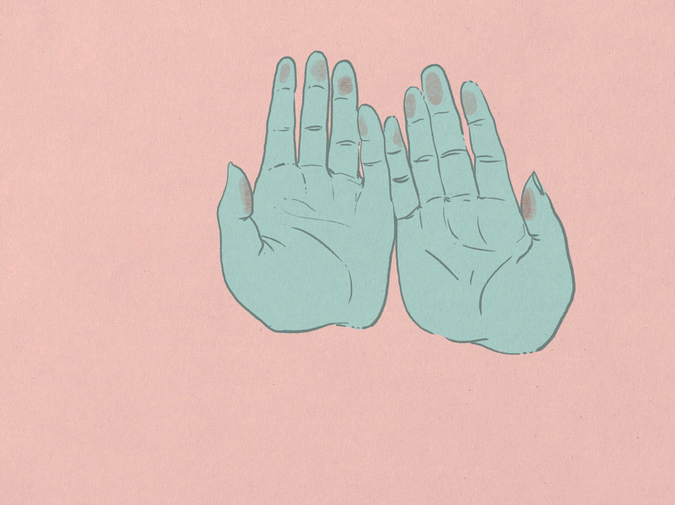 Some of the things that I remember from when I was little my mom doesn’t like to talk about. Like the way I had to see all these specialists because my hands were always itchy and I was given special cream and told to wash my hands with special non water soap. I’d scratch them by stretching out my fingers wide like cheerleading jazz hands and rub them up and down aggressively along our itchy wall to wall carpeted floors.

“How do you remember that?” she asks me.

“Because my hands still dry out and my fingertips still feel like they’re melting off.”

But she doesn’t remember what the doctors said and just tells me to use Mary Kay night cream at night and wear gloves when I do the dishes. The cream smells like somebody’s grandma. The gloves are chalky at first and loose. My hands need an x small fit. Otherwise they slip and I lose my grip and break things.

I learned it’s better to remind my mom exactly what I remember and then let her comment. It’s less of a test that way. Like instead of asking if she remembered that one hymnal I was obsessed with, I just tell her, “Remember, Here I Am, Lord?”

So now she can say, “Yes, you really liked it.”

And then that’s the end of that. Except I’m not finished remembering even though she is.

The things that stayed with me were seeing that wood marque that had four rows of numbers and the way I’d look up those numbers in the hymnal as soon as we got to our pew. That’s how it started, as something to do out of boredom, I guess. And then I got attached to that one song and memorized its number by heart so I could know immediately instead of just hoping for it to be on the agenda for that Saturday afternoon mass—that’s the mass we went to. I was all smelly from playing outside all day and then we were off to St. Raymond’s, but in my own weirdo way I was okay with my playing outside to be over because I had the possibility of that song.

I didn’t love singing it. I just liked the words. It’s cute to me now, as an adult, that I liked this particular hymn and maybe that’s what I was trying to get at with reminding my mom of this thing I did as a kid. But instead it was a conversation that felt just like walking into that church and seeing that it was not gonna be the day that I heard my song.

The song exists on YouTube now, so someone out in the world, actually edited together the lyrics flashing on top of various generic landscapes that you’d see in a daily bible quote calendar from the dollar store. It’s like the hallmark channel meets a very basic wellness cult. There’s that motivational being called upon part. Plus, it’s the all powerful lord of everything asking who can he send? But then I picture tiny me feeling this empowered after a day of bike riding, thinking loud thoughts in that church pew:

Yup, that’s me, here I am, Lord. It’s me, Der Der, and I live in Downey, California and I am part of St. Raymond’s Parish and I get really bored in church except for when we get to sing this one song where you are asking about me. I’m ready to do all this good in the world. Go ahead and send me. We don’t even have to finish the rest of the song where you ask who shall I send? It’s me. It’s always been me. I’ve been waiting for this song to come up again for months now.

But then the mass would go on and I’d eat the thin bread wafer and drink the watery spit wine and I’d make the sign of the cross and do the peace be with you and you and you parts. And it’d all be the same.

It isn’t until a day after the whole reaching out to my mom to hope to hear her share this cute thing that I did when I was little but not getting the reaction I was expecting, that I get to thinking the song is extremely sad.

I mean, it’s got people’s pain rhyming with snow and rain, and then the lord of wind and flame is gonna set up some feast for the poor and lame. I get so sad my eyes well up and soon I’m just like some of those images of kids crying from the YouTube version. It’s really got nothing to do with that damn song and everything to do with my mom.

There was that one day when she left me at church. It was on accident. I was fighting with my brother about who got to sit up front. He won. I pulled the door handle too soon and it didn’t unlock. I kept trying to pull it open and yelling but she just drove off. I ran down the street chasing and screaming MOM! MOM! MOM! But the Oldsmobile just got smaller and I didn’t know my way home from there. I thought about every episode of America’s Most Wanted and figured my life was over. I’d never see my family again. One of those BAD MEN was right around the corner waiting to take me. I stood there looking around, ready to run away but not sure yet which direction would be away from the bad guy.

Instead I found an old lady in a burgundy skirt suit. She took my hand and told me it’d be okay. She said we’d go and find the priest and he could call my mom and everything would be okay. By the time we got back to the entrance of the church my mom was back.

This is one of those things my mom would rather me not remember. But at night, before bed, when I’m putting Mary Kay’s extra emollient night cream on my worn out hands, I realize, all those scary thoughts I had, she must have had them too and who wants to revisit that.

Ifer Moore lives and works in Los Angeles. She writes zines and takes too many pictures of her dog. Follow her on IG/twitter @ifermoore