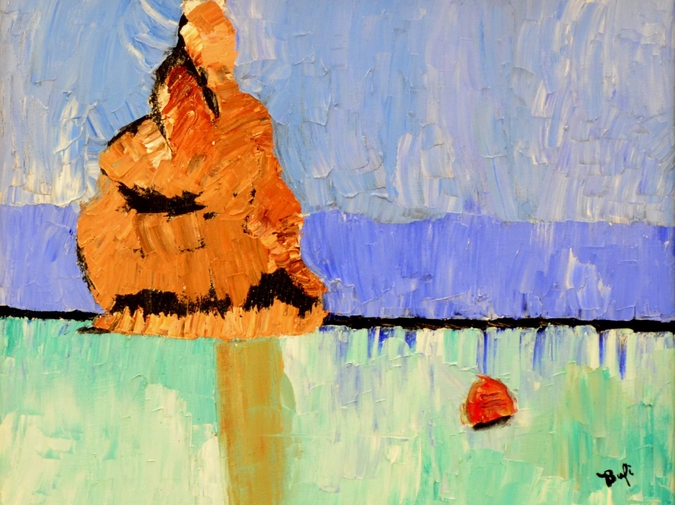 It is a cold Wednesday morning in October. It is Halloween. No wind, no cloud, no signs of rain, just a clear sky and a frigid breeze cooling the block benches of the University Square to ice. This year our group are prowling for ghosts, pursuing spooks, but not just the otherworldly kind. We are intrepid travellers hunting – or rather haunting – the square. We are exhausting the place of its details. We are the group that calls ourselves hauntologists (with a wink).

My task, printed on a folded piece of paper chosen at random from an orange Halloween bucket, is to find my reflection and write its thoughts as if it might exist independently of me. It isn’t long before I find myself reflected in the window of the tiny dine-in, dine-out restaurant at the corner of the square, where patrons are busy devouring curly fries and burgers. My reflection merges with a kaleidoscope of fried goods.

I am about to get into the zone, about to contemplate this other me with fried chicken for organs and the heads of chatting patrons as extra appendages, when I hear it. It is unexpected, a feather from the sky, and lifts me out of Halloween like a babe scooped from a womb. At first, a strum of synth that could be string or piano from this distance, then a deep, male voice singing the words homegrown alligator, see you later.

Soon it is no longer the cold Wednesday Halloween morning at the end of October. Turning to face the speakers I forget all about my reflected friend and his odd organs. Instead I could be zooming along a curved, satisfying road in hot Italian hinterlands, through the baking dunes of Espania or above the clear glass waters of Malibu while another – tanned arms and hair blowing backward – finds themselves riding shotgun, underneath the hot sun. Then, the chorus, and not a road now but a booming floor under my feet in a Tiki Bar on a white, Ibizan beach. Out beyond the shore, where sand meets sea, is the sun hovering over the horizon, teasing the dozens of couples come to watch its descent. Behind, that same voice sings out the words: time flies by in the yellow and green, stick around and you'll see what I mean.

Eventually the song sings itself out and I am back in the cold circle of the University square in the fullness of October. George Ezra’s Shotgun, from his album Staying At Tamara’s, teasing out those spectres of summer I didn’t expect to find.

Drink:
In summer, a tall, minty mojito with Bacardi Superior and an extra shot of lime. In winter, a thick layer of Ron Miel Honey and Rum liqueur, on the rocks.

Stephen Seabridge is working on his PhD at Keele University. He is the first Poet Laureate of his home city, Stoke-on-Trent. He has been published online and in print. Follow Stephen on Twitter at @s_seabridge