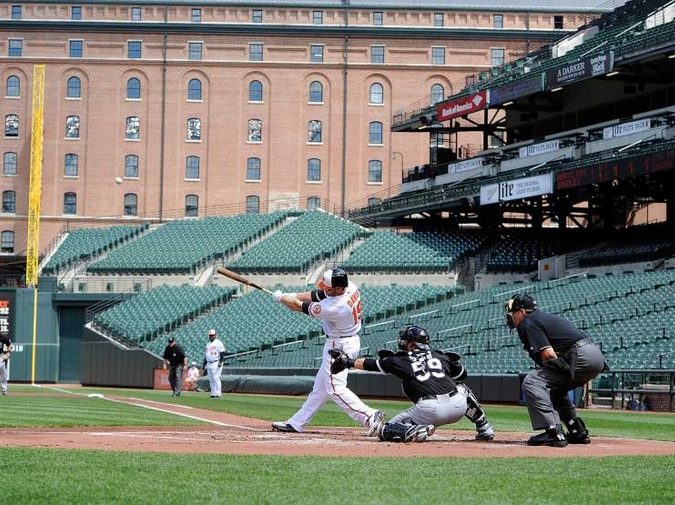 On April 12, Freddie Gray, a 25-year-old African American man, was arrested by the Baltimore PD for allegedly carrying an illegal switchblade. Between the arrest and his arrival, he fell into a coma due to spinal injuries sustained while in custody. He died 7 days later.

The declaration of a “state of emergency” by an American governor has roots in the Roman concept of justitium. Justitium was most frequently declared in Rome immediately following the death of a sovereign. It was a way for the ruling powers to shield themselves from the dangers posed by a citizenry who were, temporarily, without clear rule. In a sense, justitium is a period of mourning. In another sense, it is the very threshold at which hierarchical rule scrapes up against anarchic possibilities.

I was in Portland, Oregon earlier this year, a few weeks after Tony Robinson was shot and killed by a police officer in Madison, Wisconsin, and a week before Walter Scott was shot in the back and killed by a police officer in North Charleston, South Carolina. I was somewhere outside of Portland, actually, having driven out to a vista with my friend Corbin to smoke pot and stare out at a massive valley sublime. “Do you think any of this will be here in twenty years?” Corbin asked.

“Do you think things will ever truly collapse?” I asked.

“Maybe, but only if it’s so awful that nothing matters anyway.” Later we snorted Ketamine and I stared at the television and wondered what I preferred.

As details emerged from Freddie Gray’s death, ugly and familiar patterns mapped themselves. Freddie was “screaming in pain” when he was taken in. A witness described how Freddie was “folded,” a brutal move in which one officer presses a knee into a person’s neck while another bends the legs backward. Everything is alleged. A bystander took some video of Gray’s treatment; weeks later, this bystander was allegedly intimidated and harassed by police and arrested at gunpoint.

Over the past year or so I have watched more African-Americans killed by American law enforcement than I have Americans killed by ISIS. That’s not to draw an equivalency of purpose or intent, but to point out that the viewing thereof has to have an effect, and to wonder how much more intensely felt that effect is for an African-American who experiences the terror of the images in a way that my white privilege allows me not to have to.

According to iTunes, my most-played album of the past year has been, by wide margin, Run the Jewels 2. The most-played track is “Close Your Eyes (And Count to Fuck).” The first verse, rapped by Killer Mike, is the one I always rap along to the hardest:

Black on black on black with a ski mask, that is my crook look
How you like my stylin', bruh? Ain't nobody stylin', bruh
'Bout to turn this mothafucka up like Riker's Island, bruh
Where my thuggers and my cripples and my blooders and my brothers?
When you niggas gon' unite and kill the police, mothafuckas?
Or take over a jail, give those COs hell
The burnin' of the sulfur, God damn I love the smell
Now get to pillow torchin', where the fuck the warden?
And when you find him, we don't kill him, we just waterboard him
We killin' 'em for freedom cause they tortured us for boredom
And even if some good ones die, fuck it, the Lord'll sort 'em

Hip hop excels at grandiose and violent fantasies. There’s something exhilarating and dangerous about the  braggadocio of killing cops and jailers. The song is a safe place, a place where we can admit that “even if some good ones die, fuck it, the Lord’ll sort ‘em.”

Protests in response to Gray’s death began April 18. Tensions ran hot, but protests were mostly peaceful. Nonetheless, on April 22, the president of the local police union compared the protests to a “lynch mob,” using the rhetoric of white-on-black terrorism in a jarring example of the vilest kind of irony. Three days later, protests turned destructive. Police cars were burned, officers were injured along with protesters (the latter the norm, the former rare), a CVS was looted and torched. Fans attending the Orioles-Red Sox game were not allowed to leave the stadium following the game. The protests were flaring up just beyond the gates.

On April 27, the governor declared a state of emergency. That evening, the Orioles were to begin a three-game series against the Chicago White Sox. That night’s game was postponed.

There are times when I’m flummoxed by what to do with my anger. After I watched the video of Eric Garner, who the NYPD strangled to death as he choked the words “I can’t breathe,” I took the dog for a walk, to get some of the fresh air Garner died gasping for. I remember walking past a Saint Paul Police cruiser and wanting badly to set it on fire. It’s so American to think of property destruction as violence, just as our courts consider corporations people. How many cars do you burn to balance out a young black life?

The state of emergency declaration included a BPD and National Guard-enforced curfew from 10 pm - 5 am. On April 28, residents and small business owners, churches and community groups cleaned up debris. Protests and vigils sprang up throughout the afternoon and evening. A second Orioles-White Sox game was postponed.

A month prior, back in Portland, Corbin and I drove for the sake of driving, getting high along the vineyards and tall trees that border the city, talking through the things we might see in our lifetimes. We talked about climate devastation, artificial intelligence, the possibility of societal collapse. We compared survival skillsets - I felt like I had pragmatic skills but worried about the emotional strain. Corbin had the advantage of selective sociopathy, could turn off the emotion if needed, but lacked knife and camping skills. Maybe we could team up. That night I slept on a couch while Portland kids passed through the house and did their Portland things. I dreamt I was running from cops.

On April 29, an afternoon game of baseball was played between the Chicago White Sox and the Baltimore Orioles. It was the first game in Major League history played without fans in attendance. A few dozen stood out beyond the barred gates cheering or just curious, but inside the stadium there were only players and team personnel, radio and tv announcers, a handful of scouts.

The Baltimore Police Commissioner had by then declared the curfew a success. Justitium had maintained order when sovereignty had been threatened. #BaltimoreUprising began to slide down the “Trending” lists on Twitter feeds. The officers responsible for Freddie Gray’s death would soon be indicted. The state prosecutors would be roundly criticized by members of the right wing press for daring hand down those indictments. Baltimore residents began to rebuild damaged infrastructure. On my computer, I watched a baseball game play out in a deserted stadium.

The game was eerie in its quietude. You could make out the shouts of players, but they were subdued, as if the players were intimidated by the way their voices carried across the unpeopled void. The broadcasters over-talked to combat the awkward silence. The game played on at a brisk pace, the players eager to get it all over with. In all of its discomfort it reminded me of a memorial service; it felt, to me, like mourning.