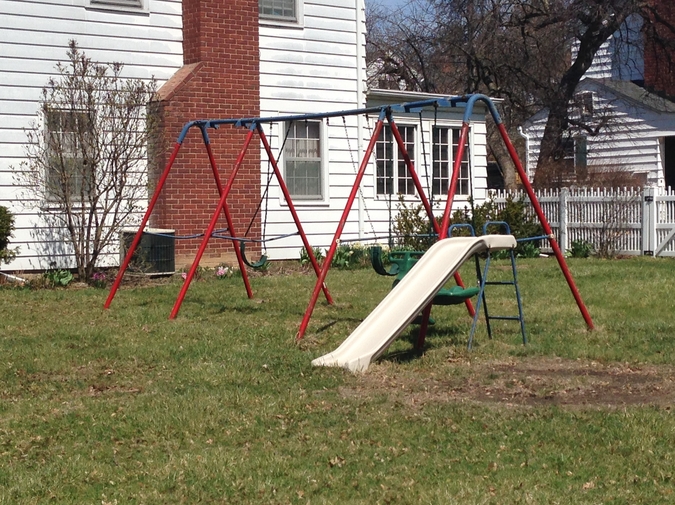 A fleet of pickup trucks and a white panel van have taken all the shady spots outside my parents’ house. I park close to the rock wall that lines the driveway, half on asphalt, half on dirt. There are patches sanded into the house’s yellow siding, and the white trim along the eaves is scraped down to raw wood. When I get out of the car, the paint guy yells to me from behind a camellia bush. He’s going to need at least three more gallons. And that’s not counting the trim, he adds. When I explain that I’m not my dad, but I can get him, he says, Don’t bother. I’ll just text him.

The front porch is ripped up. The plan was to replace a few worn boards until the floor guy found termites in the joists, and now one week has stretched into five. There’s a saw set up on the front lawn and a trail of sawdust footprints run through the rose garden and up the front steps. A gaping hole lies between me and the front door. I backtrack around the garage, where I run into the pool guy. He’s wearing a straw hat with a wide brim; his face and arms are cast a ghostly white from the zinc oxide his doctor’s ordered him to wear. My father’s told me stories about the man’s bouts with skin cancer, concluding with the same warning: That sun’s a killer.

The pool guy tells me he’s installing a new heater. I ask what was wrong with the old one, and he shrugs his shoulders. Nothing yet, he says. But you know your dad. He likes to stay ahead of the game.

He shrugs again, and I get his point.

I know my dad.

No one’s in the kitchen. A carton of milk sits on the counter, abandoned since breakfast. I find my mother at her bathroom sink, doing her hair. Her arms are up over her head, the blow dryer aimed at the roller brush, a trick she’s performed for years, though now the process takes her three times longer to complete. I yell out hello but she doesn’t hear me, doesn’t sense my presence, her focus trained on the stubborn hank of hair that refuses to curl to her satisfaction. We’re supposed to go out to lunch, but I can tell from my mother’s progress, I’m going to be hungry for another half hour.

My father is upstairs at his desk, hunched over the keyboard, pecking out an email. I bend to kiss him hello on the cheek, and he holds up his hand. Hang on, he says, I’m almost done. The banging from under the porch rattles the office windows. I start to ask what’s with all the guys when his cell phone goes off. Hold that thought, he says, and whips the phone from the holster clipped to his belt like a gunfighter, the iPhone—after five trips to Verizon to consult with his cell phone guy—his new weapon of choice.

I move a stack of file folders off my mother’s desk chair and take a seat. She hasn’t logged on her computer in months, and now my father’s taken advantage of the unused space. I flip through a stack of mail—bills from the heating and air guy and the window shades guy and Juan Luis, my upholstery guy whose phone number I now regret giving to my father.

He covers the receiver and mouths, How you doing? but before I can answer my father’s back to his conversation, arranging to meet the caller tomorrow at ten.

That was Phil, my awning guy, he tells me after he hangs up. I’m replacing the one over the porch. It looks terrible.

He points to a book of fabric samples on the desk. He wants me to help my mom pick one after lunch, and he’ll give it to Phil tomorrow.

There’s no way, I say. It took my mom three months to decide on a fabric for the loveseat and chair in the guest room. We’d flip through samples, and I’d paperclip the ones she liked. By the time we were done, she’d forgotten why we were looking at fabrics and I’d have to explain again, which led to another round of flipping and clipping until I needed a drink.

I ask again about all the workmen when a loud thud shakes the house. Downstairs, my mother yells out, What was that? and my father tells me to go to her while he makes sure the floor guy—Bob—is okay.

My stomach grumbles as I head downstairs with the book of samples. I may have underestimated the delay in lunch.

Not until the late afternoon, after the various guys have packed it in for the day, do I get an answer from my father. We sit in the living room and watch the sun drop below the valley. My mother is in the kitchen, making a salad for our dinner, a grander production than the lunch of cheese and crackers we nibbled on while thumbing through awning fabric swatches. She comes into the living room holding an avocado and wants to know if she should cut it. My father nods to me as if to say, You take this one. I start to explain how to cut lengthwise to remove the seed when she interrupts me and says, That’s right. I remember now, and heads back to the kitchen.

My father shakes his head, then gets up and pours himself another drink. He waves the bottle my way, but I’m still nursing my first.

Here’s the deal, he says. He sets his glass on the cocktail table and drops back into the sofa. This place needs to be ready. I don’t want you to have to worry if the time comes….

He breaks off here, making me wish I’d left well enough alone. Lately, a few drinks turn him maudlin. I shift my attention to the glossy white woodwork that glows in the warm light. My father has taken care of the house the way he’s taken everything else in his life, including his wife and kids: every nick and scratch returned to its original condition with a diligence I doubt I’ll be able to sustain once he’s gone.

He grips the sofa arm and takes a deep breath. I’ve got to get things in order, he says. He looks towards the kitchen. God forbid anything happens to me.

The doctors tell my father to relax, that his prostate won’t be what kills him. They tell him he looks and acts ten years younger than his eighty-five years, but some days, like today, his slack face and rounded shoulders betray him. I know better than to say he can’t control this last piece with paint and grease and wood and nails. Instead, I confess a secret: my dog clawed the back door molding while we were out to dinner last week. My father waves away my concern—he’ll get his paint guy to fix it.

I’m going to need the practice. Eventually, there’ll be more damage to repair.

Lori White’s recent essays have appeared in The Nervous Breakdown, Mud Season Review, and The Collapsar. Her short story, “Gambling One Ridge Away,” won first place in the 2013 Press 53 Open Award for Flash Fiction. She teaches English composition at Los Angeles Pierce College.