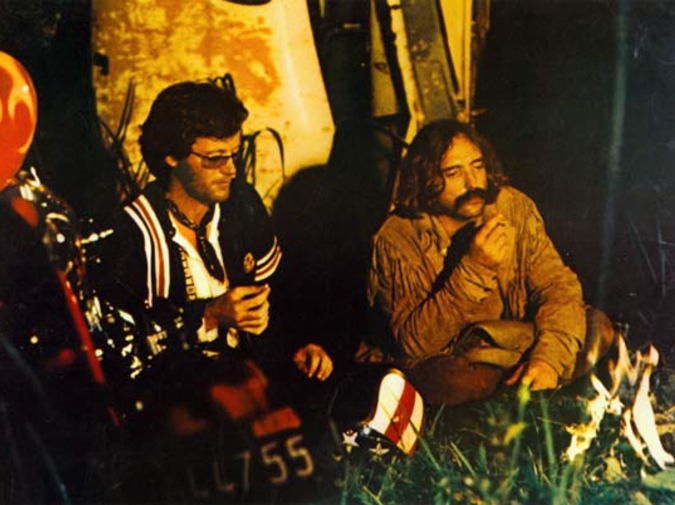 Easy Rider perfectly displays the counter-culture rebellion of the 1960s. Two hippie bros, Wyatt (Peter Fonda) and Billy (Dennis Hopper), ride their motorcycles from Los Angeles to New Orleans in time for Mardi Gras (after getting a large amount of cash for drug smuggling), while doing experimental drugs and wearing cool jackets the whole way. I really loved the culture and the era this movie represented, and how it showed that the hippies were treated almost as badly as other minority groups in the country. I also loved how this movie was a scandal back in the day. It seems funny that there was a controversy about some nice guys riding their motorcycles and smoking some weed. Although the pace of the story is a little slow, it’s made up for by the beautiful scenery encountered as Billy and Wyatt bike through the country.

It was fun to know that Fonda and Hopper were best friends in real life, and it makes the story seem more genuine. Perhaps my favorite part of the movie was George Hanson (Jack Nicholson), a southern lawyer and alcoholic in a local town. He’s befriended by Billy and Wyatt after helping them get out of the town jail. He quickly became my favorite character after asking what the word “dude” means (which, in case you are wondering, is “nice guy” according to them). In that respect, he does seem to be quite a dude, and decides to join the two on their journey to Mardi Gras. After being made fun of at a small town diner by some rednecks and the sheriff, George makes a comment that stuck with me. He was wondering about how Americans claim freedom to be the most important value, yet they seem afraid of anyone who truly has it.

Easy Rider is probably the best way of witnessing the way of life and ideas of the counterculture movement and those involved without being there yourself, and that - along with the jackets and facial hair - is what made the movie so interesting to watch. :)