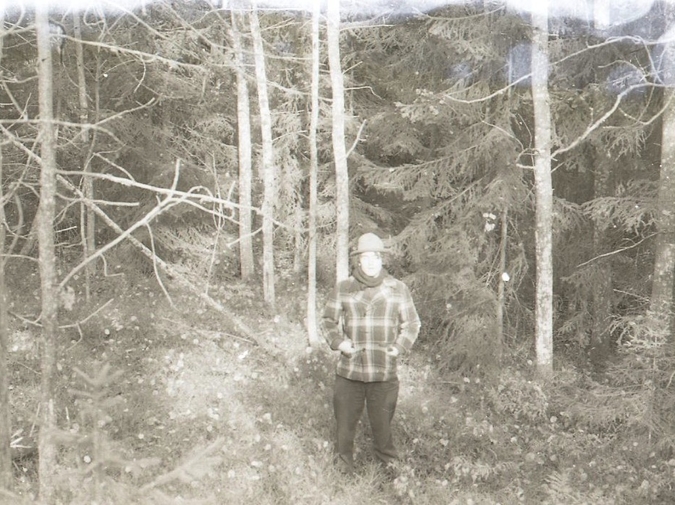 My first paying gig out of film school was a commission by the city of Randle to produce a documentary on their local logging industry, a rah-rah civic pride project but also destined to be viewed by the state legislature as they chose how to sprinkle aid money onto impoverished rural America. My thesis advisor had a cousin who lived in Randle and worked for the tourist board, or I suspect maybe he was the tourist board. The cousin had called my thesis advisor and said something like, “Hey, film professor cousin, can you do this film for us?” and my thesis advisor was like, “Hey, no. But I know a guy who is still unemployed four months after graduation and is about to get evicted.”

Randle was a seven hour drive into the hinterlands. The local Lumberman's Union czar introduced me to Tim Dunn and Reginald Hooper and John Jimmerson, heavy equipment operators who carpooled in Jimmerson’s shitty green Ford every morning out to the work site, and who were to be my liaisons and guides to a world of sweat and toil. Flanneled Virgils. In the morning (and they weren't fucking around, this was honest-to-God prairie-livin' early morning, cock-a-doodle-doo and all that) I would meet up with Dunn and Hooper (and Hooper's dog Pal, unofficial crew mascot) in Dunn's front yard and they'd bullshit for a while and chain-smoke until eventually Jimmerson's moribund vehicle would cough its way down the road.

Me and the dog would get in the back of the truck and, miserably, we'd lurch and bump our way for 90 minutes out into the middle of fucking nowhere where I'd then film a bunch of grey-bearded men cut down trees. It turned out that cutting down one tree looked pretty much like cutting down any other tree. Sometimes there was a big plume of dust but often there wasn’t. The dog ran around pissing on everything and it pissed on my foot one time and, I don’t know… in the big picture of how my life was going I couldn’t even muster up any indignation about it. I filmed the dog pissing on my foot. After a couple of days I actually started rolling film in Dunn's front yard while Dunn and Hooper explored local politics and what-have-you, because at least this was dialogue.

“They figure to raise property taxes this year.”

“I reckon that's their prerogative, then. Being our elected officials.”

“Doesn't mean we have to enjoy it.”

“Wouldn't suggest as much.”

The City of Randle offered to put me up for seventeen days at the Motel 6. Not two weeks, not three weeks, but an oddly specific seventeen days. It may have been that seventeen days was the number that would empty out their bank account. But the Motel 6 was certainly more accommodating than my dismal studio apartment back home (maybe the saddest confession I’ve ever made), so I stayed for seventeen days. Then I packed up my car, meaning I put my duffel bag in the trunk, and said goodbye to the Union czar. I drove seven hours back home and got caught up on my rent, which promptly accounted for all of my advance from Randle. I think I had about five bucks left over. I thanked my thesis advisor and asked if he had any cousins who work for a Florida beach town’s tourist board.

The project deadline was coming up, so I half-heartedly started editing this stupid piece-of-shit together and I found myself watching those yard scenes again and again. I saw how these two men, who had worked together for a decade or so, never once actually looked each other in the face. They just sort of kicked around at the ground and stared at their feet a lot, in the gloomy washed-out dawn, steam rising from identical travel mugs filled with black coffee. Hooper's youngest son Mobley gets detention for smoking in the restroom. Dunn worries in monotone about a spot of blood he coughed up the other day and hasn't told his wife about. Hooper's daughter breaks an axle or pipe or widget or something in their car and it'll take half a paycheck to get it replaced. And over the course of our brief time together, Hooper has convinced Dunn to run for Mayor next election and Dunn, for the love of Christ and God-Almighty, is thinking about running on a flat tax platform.

It all goes in the film. It all goes in, and nothing else. The end product is 112 minutes of Dunn and Hooper in Dunn's front yard. After the credits roll (I invented a personal assistant and an executive producer), you briefly see a dog pissing on a boot and then we smash-cut to a Douglas fir cracking its way down to the ground. There is a voice-over from Hooper: “I figure I'll be doing this until God takes me home.”

Dunn and Hooper Standing in Dunn's Yard was a controversial subject in Randle for some time, although it was firmly embraced by some of the faculty at the school district and is required viewing in Mrs. Davis' senior English class. And I still get a Christmas card from the Hoopers every year, and was invited to Dunn's funeral after he died of lung cancer.

Brandon Barrett is a practicing cardiologist, originally from the Oregon coast and now living in Virginia with his wife and son. His work has appeared with Passages North, FLAPPERHOUSE, The Carolina Quarterly, The Literary Review, The Cossack Review, Tahoma Literary Review, and elsewhere