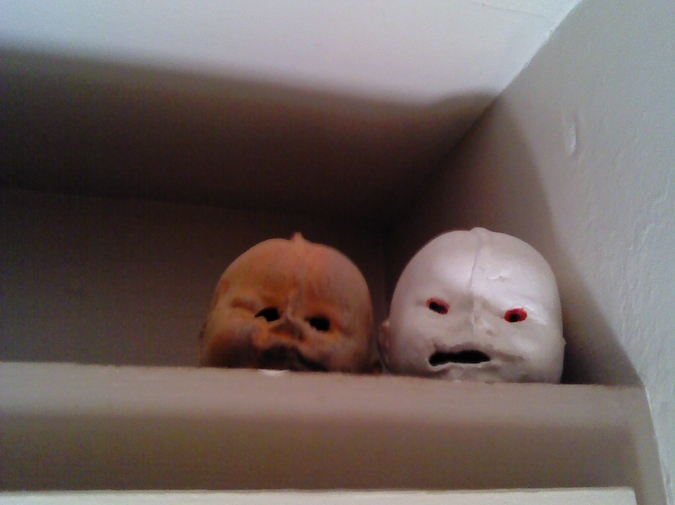 I had never considered practicing polyamory, so when my girlfriend suggested it to me, I didn’t know what to say. Matilda clarified her proposal: she would grant me permission to seek new lovers but would herself refrain from doing the same. I had been offered the prototypical male fantasy but I could not bring myself to abandon our monogamy. Her demeanor was casual as she insisted further, as if this were an ongoing conversation.

In a nasty tone, I asked Matilda what inspired her idea loud enough for the couple in the next booth to overhear. She explained with a whisper that she had noticed an uptick in my aggression since starting her sex cleanse, so she wanted to free me from the anxiety. Some blog she’d read stated that three months of abstinence could improve her gut bacteria. She refused to share the link with me.

Matilda and I were still in a stalemate by the time we left the bar. We had to reach a conclusion later since I had to board the midnight bus to my parents’ house upstate. That morning, my Abuelo had suffered an accident of uncertain fatality. Mami had been vague about the details over the phone that afternoon. She had only demanded that I return home soon in case her father’s recovery bed turned into a death bed. The Megabus cradled me north overnight, though I struggled to sleep.

According to his doctor, Abuelo could not be left alone during his recovery, so he stayed at my parents’ house, posted in my bedroom, either asleep or unconscious when I arrived. I was relegated to an air mattress in the corner of the living room—the old time-out spot.

After I made myself at home, Mami came downstairs to debrief me. Turned out Abuelo had been suffering from dementia for the past year, a fact she had kept hidden from me until that moment. His condition compelled him to repeat certain behaviors until they felt normal. All through the previous night he drew several baths of declining temperature, slowly draining him of body heat. A neighbor found him unconscious in the bathtub the following morning when he failed to appear at Saturday Mass.

Once awake, Abuelo loudly mewled for a bedside meal, which Dad graciously cooked even though we’d already eaten. I delivered a bowl of rice to my bedroom, excited to see Abuelo’s reaction to his grandson. His shoulders slacked in disappointment when he saw me. He asked where everyone was; it seemed he wanted not just to be fed, but for the entire family to share dinner with him in the bedroom. We were afraid of leaving a memory of rejection in his feeble mind, so Mami sat at the foot of the bed, Dad on the desk chair, and I leaned against the dresser with a plate of leftover rice in my hands.

The Abuelo of my youth was stoic, but as he and I grew older he became quite chatty. He answered questions we did not ask, told stories unprompted, and repeatedly reminded us that Brazilians were good for nothing. This time, his monologue eventually landed on the tale of when Dad begged for Abuelo’s permission to marry Mami.

Apparently, Dad imbibed a few beers before meeting him and accidentally said Tia Lucia’s name when asking for his daughter’s hand. Dad looked confused and had to interrupt. He claimed this scene never occurred. Mami laughed and corrected her father—it was Lucia’s husband who said Mami’s name. There was no convincing him. Abuelo was anchored in the belief that my father participated in the memory. It was impossible to argue with a demented opinion so none of us fought to change his mind.

His condition had stabilized by Tuesday, so I was finally clear to return to the city. On the bus ride back, I passed the time worrying about Matilda until I received a text from her asking to get dinner that evening at a restaurant far beyond our usual budget. Was it my lucky night?

No. She did not kiss me nor make eye contact when I met her outside her office. On the way to the restaurant, she suggested we sit in the park for a moment. When we did, Matilda sighed and confessed that she had lied about dinner. There was more: after a lot of thought, she concluded that we should take a break from our relationship. Her chastity was hurting us both. Time apart would wash away my anxiety and her guilt, and maybe in six months we could test the waters again. Funny thing was, I had presented a similar timeline to an ex I’d left in college that I never intended to honor—six months the same—yet I took Matilda’s word as scripture and would worship it well past its expiration.

Back in solitude at my apartment, I could dream of something better. To cushion the fall of my self-esteem, I had to pamper my baser instincts. I always wondered if I could swipe right on Tinder and find a willing partner for a night of sexual abandon. For once I allowed myself the indulgence but after thirty minutes of empty scrolling it became clear I had been exiled to the land of the left.

Who else remained? I dialed home and asked Dad to put me on with Abuelo. After some shuffling on the other end, Abuelo’s semi-lucid voice greeted me. We covered the usual formalities until I announced that Matilda and I were engaged. The wedding was planned for August, and hopefully a child would soon follow. Abuelo was delighted to hear my propaganda.

I knew my parents would not believe him when he relayed the false news. He would forget it himself the next day. I figured if my dream lived inside another person, for only a moment, I could hear it speak back to me and say this was all part of the plan.

Agustín Lopez is an artist living in Brooklyn, NY. You can see more of his work at agustinlopez.com.