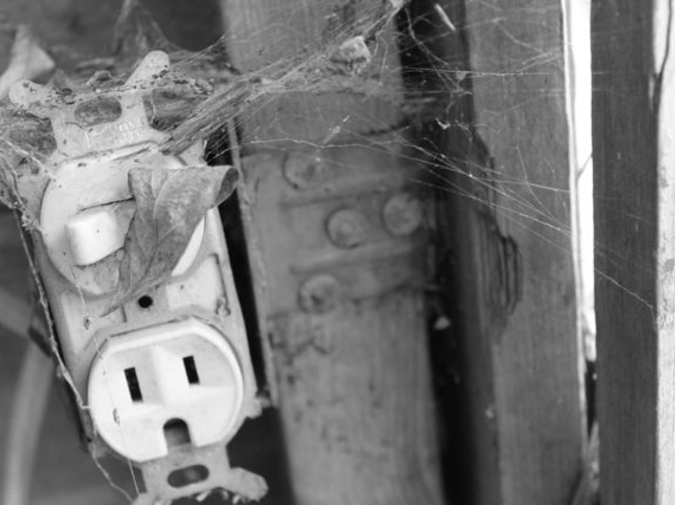 The girl and her dad ignored the signs. DANGER! KEEP AWAY FROM WATER FALLS. They stepped to the edge of the rocks. Around them, we other day hikers rested and ate lunch.

The girl stood by the edge of the water, hands on her hips. A black ponytail streamed down one shoulder. Her dad squinted through a camera.

“Just half a step back,” he said, pushing out with the flat of his palm.

She did. Her sneakers crunched against the rocks.

She stepped back. All of us watched, sick, as she lost her footing on the slick rocks. Into the water, her scream, drilling through the sound of the falls. Her dad dropped the camera and jumped in to pull her out.

I couldn’t look. Around us, kids were eating peanut butter and jelly sandwiches. You could still hear the sounds of the father and daughter's screams over the water, as they tipped over the falls.

In the heavy silence that followed, David leaned to me, quiet, and said, “cheese.”

David is named after the statue. He’s sculpted marble, with skin cold even beneath piles of blankets. His father was named David. His grandfather, too. He has the roman numerals for one, two, and three tattooed across his left wrist. When I’m driving, I’ll run my thumb over the markings. I read him in braille. I could scoop out my insides to show him that they glow, radioactive, because he sits so close.

In New Orleans, he stands in front of a building still marred with the watermark from Katrina. He levels his hand with the mark. You must be this tall to ride. He turns to camera, his cool marble lips sweeping into a smile.

Give me passion. Give me life. Flash.

I’m never in these pictures. We drive to the abandoned mining town in Pennsylvania where gasses from buried fires still ghost up to the sky. David stands in front of a sign that reads ROAD PRONE TO SUDDEN COLLAPSE and crouches into a pose like he’s quaking on unsteady ground. Flash.

He says he’s documenting. What, I don’t know. The pictures feel like wards. Talismans. As long as we have the disaster pictures, maybe we can be safe.

I don’t tell David this. I don’t want him to laugh.

I went to Ground Zero months after 9/11, when the area was still a blackened shell. A bubble of weighted air and held breaths. A family stood in front of the fence, turned to the camera, and smiled. I hated them for it. But I take David’s picture in front of sites of wild fires and mudslides. Campuses where shots rang out. I watch from different beds as he organizes the pictures into albums. By disaster. By damage. By lives lost.

We’re on the stiff mattress, in the blue dark of our hotel room. The parking lot floodlights hit my eyes. I lean into his back. He half-turns. The smiles he offers, when I’m not aiming the camera, are the drooping smiles of moldy jack-o-lanterns. Give me love. Give me—anything. Flash.

Later, I sleep. There’s a picture of him from the night we met, a campfire barbeque, folded in my pocket. He’s not looking at camera. The picture is bent, molded to the shape of my body. A fold cuts through his smile.

The apartment is in the path of the hurricane. We should leave. Instead, we buy supplies. Flashlights. Batteries. Bottled water and canned food. The only light comes from the TV, where news anchors stumble and shout over gale-force winds. When we lose power, we light candles—long, thin tapers. A loaf of bread is our candleholder. The melted white wax is birthday cake frosting.

Wind rakes through the trees and vaults branches against the building. David titters around the house, from window to window. Tomorrow I’ll take pictures of him in front of splintered telephone poles and downed power lines. I watch from the couch as he presses his nose to the glass.

Soon, the TV flickers off. A glow lights the bottoms of clouds in the distance. David slides open the window. I smell smoke. Over the wind, I hear the fire trucks. When their sirens fade, low, electric buzzes fill the air. Then comes the voice, amplified, but still far away. Evacuate the area.

Embers float by the window. Fireflies.

David turns. He buzzes, heating the air around him. His eyes flicker with heat, like the windowpanes of a burning room. He looks happier than I’ve ever made him.

We’re at an engagement party when a friend comes up to us. She’s carrying one of those old instant cameras, the ones that shoot pictures with the white borders. You can watch the pictures develop. Faces bloom through the chemicals.

David tugs me close. He presses his lips to my cheek. Before I have time to shove him away, the flash goes off, catching me mid-word. Stop. The picture pops out of the camera. She drops it facedown on the table nearby.

“Keep it turned over ‘til it develops,” she says. “Or the light’ll mess it up.”

David’s hand on my waist is gone. Give me passion. Give me life. Flash. He turns away. I wait, breath held, staring at the back of the picture. Hidden against the table, our forms take shape, a disaster scene emerging from the mist.

Nathan Tavares is a graduate of Lesley University’s  MFA in Creative Writing. When he’s not writing, he enjoys traveling, photography, and hours-long Wikipedia benders. He likes to write about thieves, love, and the end of the world. You can find more of his work at nathantavares.com.