Daughter of Wands: Notes on Hilda Doolittle, Tarot, and the Spiritual Marketplace 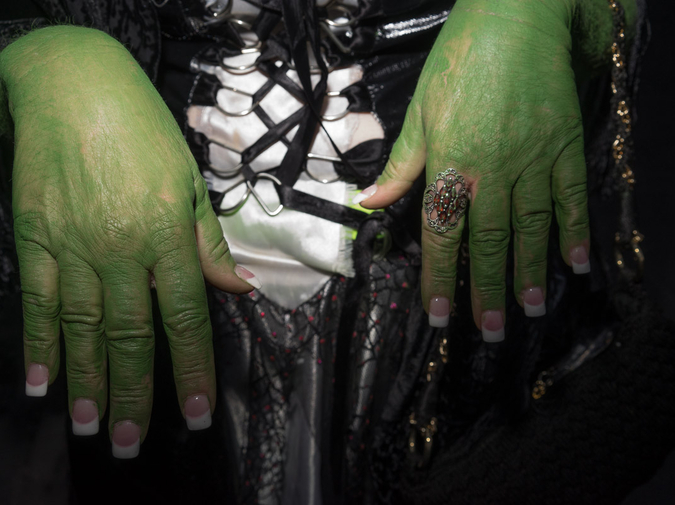 The walls, statues, and shrines of the New Orleans Historic Voodoo Museum are covered in offerings to the spirits—or loa—represented within. Plaques have pennies and dimes resting on their frames; there is a wishing stump filled with dollar bills. And there is lip-gloss everywhere. The shrines are covered in everything from shiny L’Oreal tubes to Eos’ egg-shaped balms. Baskets filled with them sit on the floor beneath several altars.

Do the spirits like lip-gloss? I didn’t leave any when I made my wish, so I’m not sure. But it tells me something: many, many women like me have wandered into the museum’s three cramped rooms and searched through their bags, hoping to offer something up for good luck.

A few men have left behind their business cards tucked into the shrines.

For three months, I’ve been drawing a tarot card every day. My deck calls the Page of Rods the Daughter of Wands. The Wild Unknown tarot is marketed towards women, and the guide book says this card represents a woman undergoing spiritual transformation. I imagine most buyers are pleased when they draw this card. This is the promise of the deck: to better see oneself. And best of all, to feel like buying it, shuffling, and pulling cards is enough to start the process of transformation.

In New Orleans, I keep drawing cards of change. The ace of wands, the ace of swords, the ace of pentacles. The French Quarter doesn’t feel magical, but wandering drunk along the banks of the Mississippi in the March sunshine does. The Bywater smells of Barbecue and flowers in full-bloom. I walk and walk and don’t even get a sunburn.

During vacation, I am taking a break from my research on Hilda Doolittle, more frequently known by the penname her ex-fiancée Ezra Pound gave her in 1912: “H. D., Imagiste.” A beautiful young woman let into modernism’s boys club, at least for a while. Throughout her career, she went by other pen names: Delia Alton; Helga Doorn. In the tradition of recent queer and feminist scholarship, I call her by her given name.

The first time Doolittle underwent psychoanalysis with Sigmund Freud, she was reading tarot, too. She dabbled in all things spiritual throughout her life: at the turn of the century, Pound gave her books about yoga philosophy; in the 30s, she read tarot; in the 40s, she began to hold séances; she believed she had four psychic visions over the course of her life. All these practices—reading translations of the Upanishads, looking at tarot, travelling to Vienna to work with Freud—were ways of working through two kinds of experiences: first, her great traumas (betrayals, miscarriage, the loss of her brother and father), and second, her inexplicable, magical experiences. Scholars often call her an “occultist,” eclectic and syncretic in the traditions she picked up, tried, discarded on her path.

I sometimes think of myself as a woman writer in the tradition of Doolittle. I am trying to alchemize the painful things that have happened to me, and in doing so, have written a lot of poetry, practiced and taught yoga, bought crystals. I have read Doolittle’s work and sometimes felt it resonate. In the veiled autobiography HERmione, the narrator, Hermione or “Her” for short, describes her attraction to yoga philosophy:

Although Doolittle names her double after Shakespeare’s Hermione, The Winter’s Tale cannot save her, or provide her any guidance. The Pennsylvania forest she lives in is more lively, vibrant, than Shakespeare’s woods. It is an environment she wants to melt into. She identifies herself as both “HER”—Hermione and female—and as “AUM,” the sound associated with the beginning of the universe, the source of all life, more commonly written as “OM” in Western contexts. Doolittle thus seeks to understand herself as a woman, and as something more: a spiritual being, a part of an ecology.

I hoped yoga would help me access something larger than myself. It doesn’t, usually, but I do like getting into my body, grounding myself. So I keep looking for other practices. Now, like Doolittle before me, I am reading tarot.

My friends do these things—read tarot, chant Om—too, with varying degrees of irony, seriousness, intensity. Every woman I meet seems to know when Mercury is in retrograde. (This means there will be problems with communication.) Many read their horoscopes at Astrology Zone, but if they don’t, they might read them through Refinery 29. Some friends worry that the chants in the yoga classes we attend veer into cultural appropriation, and others wear henna without a second thought. It is probably no coincidence that Jessa Crispin’s recently retired website, The Book Slut, had a mailing list about tarot—or that Crispin’s second book focuses on tarot readings to enhance creativity.

In important ways, I am nothing like Doolittle. I am not sure that these practices are part of a whole, that they are related. I don’t want to found a new religion, or a new language, or a new kind of literature. I just hope for a little burst of clarity. And a little fun.

But I do want to learn from her. Drawing these cards, trying to pull information out of symbols and ourselves, we forget the history of this tradition, what it has and has not enabled women to do.

I buy a book on Voodoo and Hoodoo, and it tells me that the fourth finger of the left hand is the conduit for spirit power.

I have a scar on this finger. When I was a teenager, I dropped a glass of milk from my right hand and reached out to catch it with my left. I bled and bled and had to be sedated before my six stitches. Later, I became vegan, and sometimes traced my choice back to this incident. Then I started eating meat again. Then I started reading my tarot, waiting to feel a prickle in my fourth finger before I select a card.

The book says a silver ring will enhance my power. Another thing to buy. Sometimes I worry that all the things I’ve bought are not really things I’ve discovered. Perhaps my desire for self-understanding makes me uniquely susceptible to the promises of the spiritual marketplace. Or perhaps my mistake is thinking that I am uniquely susceptible, when these products and practices have such a wide appeal.

I set this worry aside in order to move forward.

Instead of turning away, I try to understand more deeply, to make connections. What do tarot cards correspond to? There are 78 cards in the tarot deck in the suits of wands, swords, pentacles, and cups, as well as the 22 cards of the major arcana. Reading extensively, Doolittle learned that the cards correspond to emotions, events, and transitions experienced by all humans. To put it in Jungian terms, the symbols on the cards correspond to the collective unconscious. But Doolittle was not a Jungian.

In many of the texts Doolittle wrote and read, writers suggest that occult work only makes sense to the Western practitioner after she has been exposed to the teachings of psychology—really, the teachings of Freud. William Walker Atkison, writing under the pseudonym Yogi Ramacharaka, states, “the Yogis owe [psychologists] a debt of gratitude for preparing the Western mind for the fuller teachings.” Atkison, drawing eclectically on Freudian psychoanalysis and on yoga philosophy including the Upanishads, attempts to introduce students to a theory of mind including the unconscious, consciousness, and a third, highest mind: the “Spiritual Mind.” (It is worth noting that here, particularly, Atkinson diverges from traditional yoga philosophy, which I set aside to think through Doolittle.)

For Freud, of course, we are of three minds: the Id, the Ego, and the Superego. And we might imagine that the Superego, the mind that holds the ideals we try to uphold, is very different than the “Spiritual Mind.” Atkinson writes, “All that has come to man, in his evolution, which tends toward nobility, true religious feeling, kindness, humanity, justice, unselfish love, mercy, sympathy, etc., has come to him through his slowly unfolding Spiritual Mind.”  Doolittle read Atkinson long before she read Freud, and I guess that she may not have seen much of a difference between their two theories. In fact, psychoanalysis is mostly mystical from her point of view: she described her sessions with Freud as séances; he was the medium, and through his work, Doolittle spoke again with her mother, her father, and her childhood self.

For Doolittle, tarot cards are not symbols, but more like Freudian symptoms: when one comes up, its meaning is unique each time. Drawing a card, you must look backwards to discover what it means within the context of your life, remembered and unremembered.

Tarot, then, is an opportunity to look back as much as it is to look forward; each card helps you to do the work of “remembering and reconstruction,” the same work Freud says the analyst does.

In my deck, the Daughter of Wands is a beautiful, colorful snake coiled into an infinity sign and wrapped around a stick. Is there something sinister about her?

In other decks, the page of wands stands in a desert, looking at (talking to?) his staff. Although the landscape around him is blighted, his focus is singular, he is engaged. It is certainly not a card of chaos or despair. Close-reading the card’s symbols, it seems that at worst he is self-absorbed, stuck in his own internal reverie. At best, perhaps he is ascetic, independent from the landscape around him because his inner life is growing so rich it can sustain him on its own.

I am still happy every time I draw this card.

I go to see a psychic in New Orleans. She doesn’t read the cards the way I learned to, setting them out in a Celtic cross-spread and interpreting them one-by-one based on their symbolism. As above, I close-read the cards, just as I close-read Doolittle’s poems and prose. Intuition is not the driving force of my work.

The psychic shuffles the deck several times, draws five cards from the top, and begins talking. She keeps going for 30 minutes. She advises me to:

Cut off old friends, old lovers, anyone who has nothing left to give

Stop explaining my own syncretic interests to others: they may not make intuitive sense, but they will converge into a whole.

This last piece of advice is what I’ve been hoping someone will tell me for years.

In HERmione, the Ezra Pound character keeps telling Her that she and her friend and lover Fayne “would be burned as witches” in another day and age. Later in her life, Doolittle was hesitant to share her experiences or practices with many of her friends and colleagues for fear they would think she was insane. When she explained her psychic visions to Freud, he interpreted them as dreams rather than as waking experiences.

Members of “generation witch” need not hold any of these fears. Perhaps this is because women have more power and less to fear; perhaps it is because no one thinks that tarot or crystals or mojos can make women powerful. And if we merely acquire products to curate an aesthetic, to Instagram spreads of cards with crystals nearby, they probably can’t. They have no power on their own; they must all be charged with something that comes from within. A hope, an intention, an insight that is wrenched out only with some effort.

Rebecca van Laer's poetry and prose appear in Prodigal, Salamander, The Cimarron Review, and elsewhere. She has taught creative writing at Boston University and at Brown University’s pre-college program for high school students. She is currently a Ph.D. candidate at Brown University, where she studies queer and feminist autobiography.