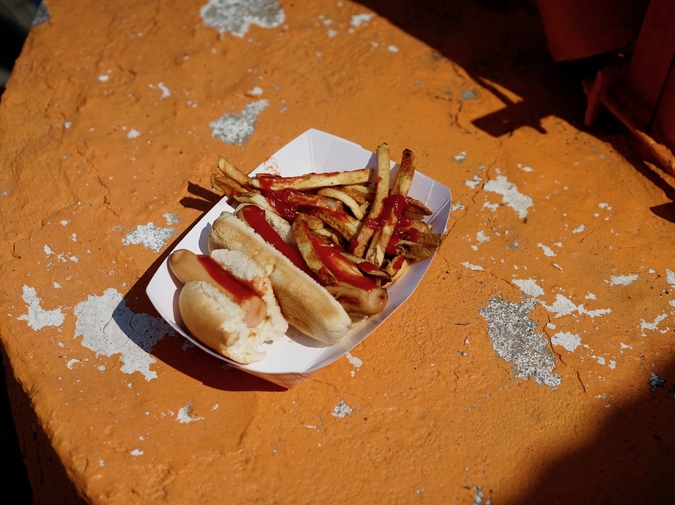 It was late July, those days in Chicago when summer is past its prime and everybody's waiting around for a bit of fun. I was sitting on the concrete steps out back watching him at the grill.

You're burning those burgers, bruh.

Naw, watch. The outsides'll be a little burnt but the insides'll be perfect.

Yeah but we can still taste the outside and it'll taste burnt as hell.

I smiled at him, salty droplets sparkling on his broad brown forehead.

You wanna man the grill then?

I took a swig of my Makers Mark and Dr. Pepper. His two huskies pawed at an old dead possum, above them the cicadas were singing at full pitch as warm wind blew through the green leaves like hot breath.

He looked up at the sky. Big puffy white mountains slowly rising, swelling.

I was gonna take the dogs to Potawatomi later. Wanna come?

We'll see. Think this girl wants to go have dinner with her family.

He nodded at the burgers, pushing one around with a spatula.

The screen door opened. A thin twenty-something stood there, her belly round.

Babe, are the burgers almost ready?

Look like they been ready. I smiled with my glass up to my lips.

This guy's got jokes. When he smiled he looked like the boy he once had been. Except his eyes, always older now.

She disappeared, sounds coming from the kitchen, and was back at the door holding a dinner plate.

Without getting up I turned back toward her, grabbed the plate, and handed it to him. Then she was gone again.

Still can't believe you're having a baby. I kept my voice low so she wouldn't hear.

He just nodded his head, slowly, his big shoulders bent over the grill. His hair was still kept in the devil-dog style, with a high fade, only now his thick hair on top usually swirled in every direction like he just got out of bed.

I wonder if Dad knows, I said.

No joke, I think about that all the time.

You know he's gotta. The cousins have Facebook. Someone must've told him. He hasn't called or texted?

He huffed. He was sliding burgers onto the plate with the spatula.

I was thinking of texting him, he said.

My eyebrows arched and he glanced at me.

Yeah, I figure it's been a long time, you know?

But don't you think it's been too long?

Yeah. It has, he said. But should someone die alone just for being a piece-of-shit father?

Everybody dies alone. He made us grow up alone, which is way worse.

I guess. He sorta fucked us for life, huh?

Naw, he tried to. But we survived it though. Now look at us. We turned out to be pretty decent men.

Cheers, bro. He raised a bottle of beer.

She showed up in the doorway again, this time holding a new bag of burger buns.

Babe, me and Lily want our buns toasted.

Me too, I said, passing him the bag.

'Kay, here, he said, handing me the plate of burgers to pass back.

When she was gone he asked, So when are you and o' girl having a baby?

I huffed. Not never. You gon' hafta wait till Jeanette pops one out to be an uncle.

He shook his head, smiling. You're not even curious to see what being a dad is like?

Sure--I'm curious--of course. But I love the freedom I have now. I get to spend my days however I want more or less. And, no homo, me and Lily like that it's just us, that we can just focus on being with each other, and we don't want anything to come between us.

That too. I grinned and took another swig.

Babe. She was at the door again, whining. You didn't cook the burgers completely through the inside. Look.

On the plate in her hand, a burger patty split down the middle, spread open, the inside red and wet.

I glanced back at it. That's medium-rare. Perfect.

Naw, it's just that you Mexicans like your meat burnt to shit.

Well, he burnt the outsides, she said. So just keep going.

He just cooked them a little cajun-style. Right, bruh?

Like pranksters he and I smiled at each other.

Well, she said, you forgot to put cheese on them anyway. So put them back on the grill.

You want cheese on yours, bro?

What am I, a sociopath? Of course I want cheese on my burger.

Dayum! This nigga's bustin' out the dictionary on us! he said smiling, laughing.

I know what a sociopath is, she said and went back inside.

She should, I said under my breath.

He shot me one of his touchy half-smiles, his eyes saying Don't go there. He put cheese slices on every patty except two, placed two lines of buns down on the grill, then watched it.

But what if you regret not having kids? Like when you're an old man?

Maybe I will. But I'm pretty sure I won't. The older I get, the more sure I get. Sometimes I have a dream that Lily's pregnant. Usually we're at a baby shower or getting a sonogram at the doctor's. The baby's coming and we're getting ready for it. Like a dark cloud over the rest of my life. Or a door closing to the future I want and another door leading toward the normal life that everybody else has. My heart starts racing and I wake up sweating and it takes me a while to go back to sleep.

That's fucked up, bro, he said, shaking his head at the grill. You don't think you'd feel any different soon as you held the baby? He kept talking as though to the grill.

Ha! Maybe? But I don't wanna change, not that way at least. I don't wanna grow up like that and be worrying about pampers and soccer practice and field trips and school supplies and all that everyday bullshit. I like focusing on my stuff, what I wanna do.

But what if you regret it later?

I'll prolly regret not having a kid a little, but not that much. But if I did have a kid I would regret not chasing after the life I wanted to have. And that regret would kill me, because that regret you can't do nothing about. It's not like you can return a baby. Can you?

We smiled at each other, him shaking his head. He looked up at the sky again.

I smiled awkwardly. Maybe it will rain. Who knows. I can't tell the weather anymore since we moved to Vegas.

He started removing the buns from the grill, then the two regular patties, then the yellow cheesy ones.

Baayyy-b, you burnt the buns, she said when she was at the door again and we had handed her the plate. Look. They're hard as fuck.

She tapped a bun against the plate; you could hear how hard it was.

He sucked his teeth and spread his lips out again, annoyed, defeated.

Fuck it, I said. I'm in the mood for pizza anyway. We can't get good pizza out west.

The four of us were eating pizza, watching a scary movie, when we heard the first crack of thunder rolling. A little after that the baby came.

Hector Luis Alamo is a Chicago writer and journalist now living on the edge of Las Vegas. He is the former deputy editor of Latino Rebels, where he was a regular contributor, and is a former columnist for the Chicago daily RedEye. He now writes a weekly Spanish-language column for Chile’s Prensa Irreverente, the English version of which appears on his recently launched blog, Enclave.