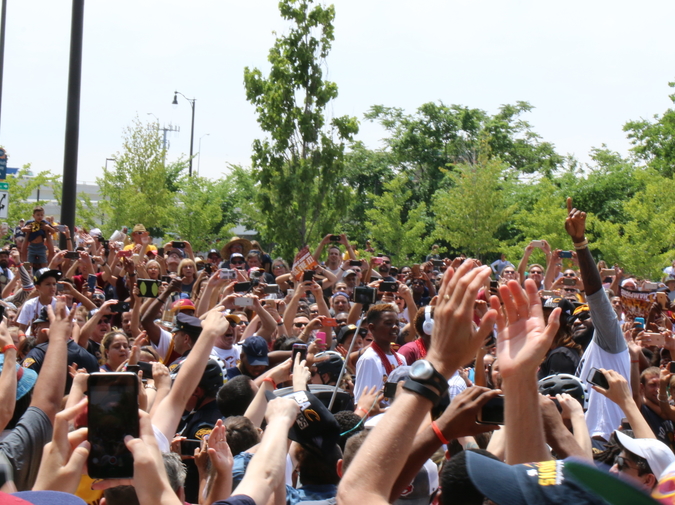 in over three weeks, feeling strange there,
almost rested, but not quite, how big

my bed was around me, how new again
after so much time spent away, my body

returning to its soft shell creaking belly-
forward over the edge of the bed, shuffling

to the bathroom, back to the bed
to make it, and on down the long hall

to coffee in the kitchen, cantankerous
in the joints but pleased. Gets exhausting

being on vacation so long, I said to a friend
when I got back, citing another first-world

problem, more drinking and eating and
dancing and swimming and traveling and

tanning and fucking and crying and falling
in love than anyone deserves, everything

starting with the Cavs’ miracle comeback
against the Warriors down 3–1 in the Finals,

which seemed impossible after Game 4,
Viswam and I and other high school guys

at Red’s party shaking our heads and talking
about how we blew it, accepting defeat

in that veteran Cleveland way, Viswam
making fun of me for Ana’s sake, telling her

how insane I got about Cleveland sports,
and then his wife stepping in and saying, Now

hold on—you got pretty worked up too,
which he denied, saying it wasn’t the same,

and he was right, I’ve known no Clevelander
who ever got as worked up about Cleveland

sports as I have, except maybe that one dude
several rows up behind me at that meaningless

Indians game I went to almost a decade ago,
who got so upset about Cliff Lee’s pitching

for a long minute, so loud that even I cringed,
and as the crowd had quieted due to all the runs

Lee was giving up, he must have heard: soon
he was embarrassingly sent down to the Minors

and left off the 2007 club’s postseason roster,
though he’d been a mainstay in our rotation

his whole career. That embarrassment fueled him
to work on his game so hard in the offseason

that he won the Cy Young the next year, one
too late, of course, in typical Cleveland fashion,

as we could’ve used that Cliff Lee when our 1-2
punch of C. C. Sabathia and Fausto Carmona

melted down in the ALCS against the Red Sox,
unable to handle the pressure of winning one

more game to take us to the World Series, until
we, like the Warriors, blew a 3–1 series lead.

I remember Bill Simmons writing after that series
about how distinctly the fortunes, the collective

impossible comeback against the Yankees down 3–0
in 2004, how Boston no longer expected that

bad thing to happen that would crush their hopes
and dreams, how when Kenny Lofton hit a pop fly

in Game 7 that somehow dropped to put him
on second with the Tribe trailing 3–2, Boston fans

didn’t panic, as they would have in 2004, but
when third-base coach Joel Skinner inexplicably

wall at Fenway into no-man’s land in front of
Manny Ramirez, Cleveland fans knew it was over,

that was our fuck-up, as the next batter, Casey Blake,
hit into a rally-ending double play and we got

blown out after that. Simmons wrote consolingly
and surprisingly confidently to Cleveland fans

when they least expected it, when their hopes
seemed most abysmal, as Red Sox fans’ had been

in 2004, and I thought of his words every time
a Cleveland team was on the brink after that:

our second- and third-best players, but neither
time did we come back, and I thought umm

too late, as the Warriors had revolutionized
the game by then and LeBron was teetering

past his prime. But maybe we just weren’t down
enough. Those other times I still believed

we could come back and win, but this time,
against the “historic” 73–9 Warriors, so “historic”

they were making me vomit in my mouth
at that word, down 3–1 going into their building,

where they’d lost three times all year, trying
to win three in a row against a team that had

never lost three in a row under their current coach,
with two of those wins needing to come

in their building, where, as I said, they’d lost three
times all year, I’d basically given up, checked out

emotionally, as I had enough emotionally
on my plate after my first fight with Ana,

not knowing what she was going to do, back
out of us because I was too emotionally invested?

that Draymond Green had been suspended
for punching LeBron in the nuts in Game 4,

and a little glimmer of hope fired up in me:
without Draymond defending the paint

I knew LeBron and Kyrie could go off in Game 5,
and if the Cavs won that game they’d likely

win Game 6 at home, forcing a Game 7 which was
anybody’s game, you had to figure the Cavs

would have the edge because of momentum,
LeBron’s Game 7 experience and the incredible

go to waste. And that, historically, is exactly
what happened. Bill Simmons was right,

it happened when it seemed most impossible,
when all the weight of past Cleveland failures

seemed impossible to lift, which we’d just
been reminded of in the new 30-for-30,

Believeland, it was as if we had to be taken
to the absolute shittiest point possible

before being lifted up into another life
so that the joy, finally, would be unbridled.

And it was. In the closing seconds of the game
as Mo Speights flung up a meaningless 3

that could not affect the outcome, I started
hopping in a hug circle with my newfound

Cleveland friends Donna and Jenn, “hopping
hug circle” was now a term forever in my lexicon,

we kept hopping and hopping in disbelief
and somehow my hat, which I always placed

so carefully on my head, got knocked off,
not to be retrieved until an hour later when

I found it trampled on the floor alongside
my sunglasses, which I never misplaced,

so paranoid was I about losing another pair,
I don’t know what I said when we won

but it was probably something along the lines of
Oh shit! Oh shit! We did it! We fucking did it!

I watched in the days afterward, when I cried
in a way I didn’t know was possible, yielding

to sobs of laughter that plunged my eyes
into my hands, thinking of every heartbreak

I went through, 30 years of frustration and
failure, three-quarters of my life, all the times

I experienced some smaller joy on the cusp
of this but had to keep the final joy in, the final

ecstatic release, all of that came pouring out of me
as I sat there in my kitchen, sad and happy

and lonely and laughing, watching the people
celebrate in Cleveland without me, hopping

up and down in massive hug circles proliferating
in and around the Q all over the good city,

the night, pouring champagne over my head,
as I always thought I would be if we won a title,

but I was in Brooklyn teaching a workshop
the day of Game 7, I had to watch the game

packed into a bar with Donna and Jenn alongside
fairweather fucking Golden State fans, who

cheered every Steph Curry 3 as if that is all there was
in basketball, and, possibly worse, lukewarm

Cleveland fans, who wore the gear but clearly
were not authentic because they chatted and laughed

throughout the game and swore not even once,
whereas Donna and Jenn and I were not only

seats at the bar we occupied for Game 6,
I for one had been watching the games in a bar

hadn’t lost yet that postseason when I watched
them in a bar without her, so even though I

with her, I couldn’t do it, couldn’t let her come,
that was Cleveland for you, Donna and Jenn

never would have forgiven me if we’d lost,
they were already giving me the stink eye

who was overly negative about our chances
and she just blah blah blahhed during the game,

something a 3-pointer, until I had to say, Look,
we’re not here to talk about hot guys tonight,

and Donna and Jenn and I returned happily
to our unhappy silence, only broken by eruptions

into profanity whenever something bad
or good happened, you likely couldn’t tell

if you were observing us from a distance, as often
the line between joy and terror is difficult

to discern in these celebration videos: the first
I watched of a mother and her daughters

looks something like a POV horror film
when the final buzzer sounds, the girls squealing

and squealing while the camera frame shakes
uncontrollably, another shows a man

shrieking under his breath to his dog alone
in his living room, collapsed in front of the TV,

another shows a family jumping out of their chairs
and storming through the rest of their house,

leaving the chairs eerily silent behind them
to take in Mike Breen’s ongoing commentary,

as the camera shakes and shakes showing nothing
but blurred noise: these videos didn’t seem all

that different from some of the videos I watched
of the truck attack in Nice on Bastille Day,

where the camera frame shakes and people scream
running down the street: I don’t know what

this means, exactly, except that pure unbridled joy
can look a little terrifying, perhaps can feel

a little terrifying, as Ana would text when I went
home for the victory parade about how much

she missed me, saying, when I asked if she was
surprised, “Terrified is more like it”: that kind of joy

can only be unleashed out of an emotional investment
bordering on the insane, none of the hot guys

he didn’t want anyone to think he was crazy,
didn’t know what it was to upend a table

or throw a remote at the television or scream
profanities at nobody in the room, didn’t know

what it was to replay fatal sequences in their head
from games watched over two decades ago,

feeling the same seemingly preventable agony
all over again, didn’t know what it was to feel

Minneapolis or Ferguson or Staten Island or
Sanford or Cleveland, because they didn’t know

the day after we won, despite not crying at all
the night before, or the last two years for that matter,

know this ridiculousness, this sad sack passion,
I was weeping over that more than anything,

how it could be redeemed, finally, in the end,
like this, shared with so many others lifted

out of insanity but not shared, as one by one
my friends broke off from the celebration

Sunday night, having to work the next morning,
leaving me alone on my bed with ESPN on,

still wearing my LeBron jersey with a bottle
of whiskey tilting toward me, flickering

in and out of consciousness until 5 AM
watching the replay of the game, coming alive,

briefly, when golden Kyrie raised up to hit
his game-winning 3, pumping a soft fist,

then subsiding into something that looked
like death, or the seas of championship.

Jason Koo is the author of two collections of poetry, America's Favorite Poem and Man on Extremely Small Island, and coeditor of the Brooklyn Poets Anthology. An assistant teaching professor of English at Quinnipiac University, he is the founder and executive director of Brooklyn Poets and creator of the Bridge. He tweets about Cleveland sports @EffingKoo.