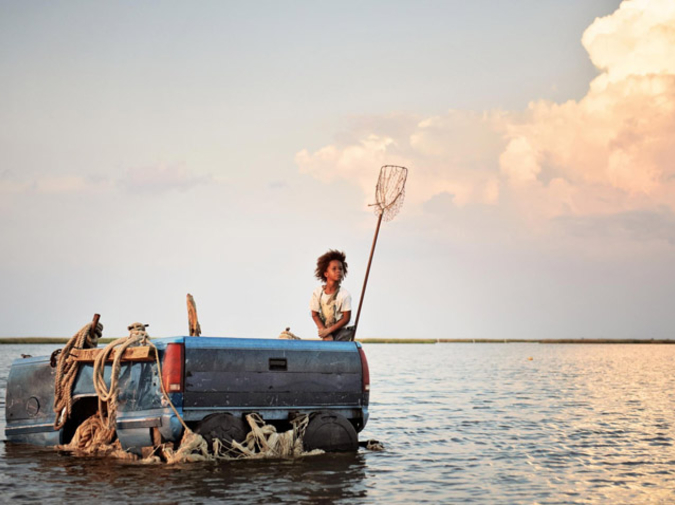 Searching for her mother, as well as caring for the people she loves as they battle for survival, the story of Hushpuppy (Quvenzhané Wallis)  - the main character in Beasts of the Southern Wild (written first as a play by Lucy Alibar and directed and co-written for the screen by first-time director Benh Zeitlin) - feels very coming-of-age, even if she is only six. The motherless Hushpuppy is forced to find her way in the world as her father, Wink (Dwight Henry), is coming down with a strange disease and polar ice caps are melting and threatening to flood their community - known as the Bathtub, which is the southernmost land remaining in the world. As the ice caps melt, prehistoric beasts referred to as aurochs are unleashed, threatening destruction wherever they travel. The imagery is absolutely stunning, and some of the shots reminded me of the cinematography in The Tree of Life.

I loved that most of the actors, including Quvenzhané Wallis (Hushpuppy) and Dwight Henry (her father, Wink) in the movie had never acted before, and that they look like average people you see every day walking down the street. Because of this I never once felt like I was watching a movie with actors, but felt more like I was looking in on someone’s life for a brief period (albeit a life of often mythic proportions).

What surprised me most about the film was Hushpuppy and Wink’s relationship, which couldn’t be easily categorized as most father/daughter movie relationships are as either bad/abusive or good/uplifting. Both Hushpuppy and Wink have hot tempers and lose control of their emotions throughout the film, but their passions – while ugly at times - seem to make the beautiful, quieter moments between them so much more honest and captivating. They have an intense, dependent relationship, one more complex than we are used to viewing in film, and one not easy to read. Because of this, I found the film to be original and thoughtful, and the father/daughter dynamic incomparable to any I have seen before on screen.