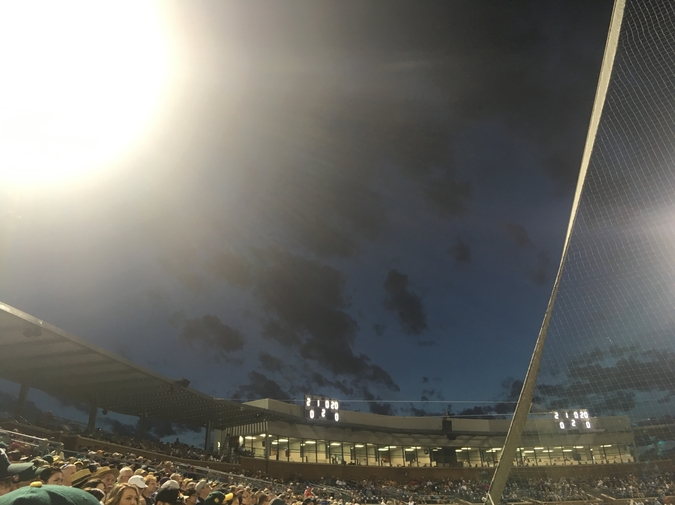 Old Seals Stadium is a shopping center now. It is a parking lot, a grocery store, a 24 Hour Fitness, a Ross Dress for Less, a Japanese dollar store. I get all my errands done at old Seals Stadium—all my needs are met. Food and clothing, health and wellness, a Saturday treat and a much needed coffee. I round the bases of old Seals Stadium, pushing a shopping cart down linoleum aisles of office supplies, of polo shirts, of frozen dinners. I pause at piles of fresh produce, thumbing avocados and teasing tomatoes. I compare prices of bagged salad kits for hours. On warm days, I sit in my car and sip a smoothie aptly named Caribbean Breeze. My eyes get heavy. I lay out in the backseat of my 2000 Honda Civic and nap in what used to be shallow left-center field. My grandfather grew up in San Francisco and would take the streetcar in from Ocean View to watch the Seals play baseball with his brother. He told me they argued over the DiMaggio they’d rather have play center. It wasn’t much of a debate, but my grandfather was loyal to his man and would shout Dom until he was voice was gone. I didn’t even know Joe DiMaggio had brothers when he told me that.

I kill time in old Seals Stadium. The ballpark where weekends and afternoons go to die. I spend money when I’m bored. I buy candy and key chains from the drugstore, sushi making kits from the Japanese dollar store and bagels by the dozen. I give the cinnamon raisin ones to the homeless man leaning against the wall in deep right field. He says God Bless and I nod, saying nothing, as I hold the pocket change in my hand so it won’t jingle.

I trace the old warning track with my steps and watch people come and go. My grandfather would talk about how spacious the outfield was at old Seals Stadium, making triples and inside-the-park homeruns more common than balls clearing the fence. I suppose the car engines and bus bells on 16th street now were out done by the charisma of the bleachers during a ballgame back then. See the fans rise in a wave of realization as a liner skirts between two outfielders, burying itself against the wall. The batter rounds first and heads for second without hesitation. The men grip their hats as he loses his on the basepath. They windmill their free arms, sending their man on, go on! go on! The fans bounce on their toes as they calculate trajectory and speed, measuring the distance of the ball from the plate, the runner’s steps to home. Get down! Get down! they honk as the man and ball collide.

The most exciting play in baseball, my grandfather said to me once.

I shrugged at that, not knowing what to say. I had never seen an inside-the-park-homerun before and still haven’t. I don’t care much for the sport to begin with, but I remember wanting to say something to him in that moment. He was lying down, tucked into bed, and I wanted him to keep talking so I told him that I lived a couple blocks from 16th and Bryant. His eyes widened at that, his face seemed to clear.

He nodded, Oh yes, that’s right. His face shrunk as he looked down at his hands. Well I used to watch games there all the time.

Steven Kennedy has been published by Rantoul Magazine, The Esthetic Apostle and The Worble Zine. His writing has been awarded by the San Francisco Browning Society and presented at Death Rattle Writer's Festival in Nampa, Idaho. He lives in the Bay Area.