An Interview with Pia Ehrhardt 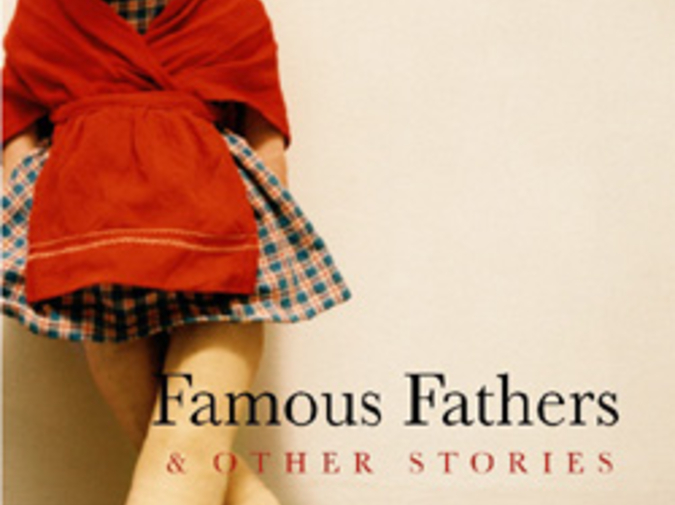 Very soon, a book named Famous Fathers will appear on bookshelves. It's by the astonishing Pia Ehrhardt.

This is very exciting.

I have been a fan of Ehrhardt's subdued, gorgeous fiction for some time, followed her writing as it went from web to print journals, and figured someone would be savvy enough to offer her a book contract sooner or later.

Famous Fathers more than lives up to the promise of the short, remarkable pieces of prose you can find with a quick search for Ehrhardt's name in a search engine. There are passages I read and then reread, and as I reread, it occurred to me that I wanted to talk to Ehrhardt about writing, and specifically about her mastery of the present tense. Fiction in the present tense is a tricky thing. It's, often, just a trick an author uses without considering the implication. Ehrhardt has it down.

Famous Fathers is full of stories that confront difficult emotional terrain. It seemed to me that the present tense was a way of avoiding sentimentality. The narrators are not (tense-wise) far from the stories they tell. They can't idealize there own roles. They don't have time to create intricate justifications for their actions. We don't have them on the couch, figuring out how to lay the blame at their parents. The trauma of a story like "A Man" has not sunk in - it's all right there on the surface.

I try not to take sides in my stories, and the present tense helps me flatten out the perspective and play with just-the-facts pacing, while I'm loading the decks, layering trouble, and trying to make sense of why people hurt each other, why parents leave kids, and spouses cheat, and fathers exploit daughters. Even though the delivery sounds sudden, there's a world-weariness to the narrators who're telling the stories. I want to draw characters who are fierce and surpriseable, open to possibility, even when they're bruised. I've always thought of "A Man" as a past tense story. I feel the presence of the person who's off camera and wanting to talk about Lillian and Doss. It's her story as much as it's Lillian's story.

When a story suggests itself to you, and the first draft is being written, these implications of tense may not occur to you. But more drafts come (I assume), and you can spend time thinking about this. Did any of the pieces in Famous Fathers change during rewrites? Or did they come this way? Did you feel your instincts were right from the outset?

Most of the stories in this collection started in the present tense, I think, because I felt an urgency to get them written. I'd published young, and then taken a twenty-year detour away from writing. Along the way, I forgot how to tell the truth, so by the time I went to graduate school in 2000, I had a lot to talk about. I was loaded for bear, and I sure didn't want to lose the reader's attention. While drafting, I switched tenses to deepen the psychology in the stories. The story "Famous Fathers" was originally written in the present tense, first person, and then I switched the whole thing over to third person, past tense to give Katie more gravity, so she could smarten up some, and so I could see her from a distance. Teenagers don't have much access to their psyches, but they do have dreams and worries for days, (I'm the mother of a seventeen-year-old) and I needed a better look at what she was doing and why. My characters might not sound like they've spent much time on the couch, but I have!

Do you think, then, what you are trying to do is craft stories that have a sped-up internal clock? Are you pushing everyone ahead because the characters, like you, are also loaded for bear and not ready to look behind, or even down at their feet?

What occurs to me about this approach is that the powerful emotional moments in the stories then become speed-bumps to the characters, and something much more substantial to the reader. How, then, do you indicate to the reader that the little thing that felt like a bump to the character was, in fact, a wall that they smashed into?

Can you give me an example?

In "How It Floods," there is the moment when the narrator is sexually propositioned by her father. It occurs nearly wordlessly (at least if we are to trust the narrator's retelling). On the page, the impact of the moment is minimized by the retelling - though it occurs in past tense - because the frame remains present tense. It appears, is broken off by white space, and moved past.

In "How It Floods," the father's encroachments, the boundary-crossings, come to bear on the woman's adult relationships with men, and they're related in the past tense. She's been mentored and objectified by her father, and now she's resisting being a receptacle for men. In the scene where he comes into her room, I tried to keep the telling of the story as quiet and as contained as I could, so that the scene didn't shout INCEST! BAD MAN! But that it did wound. The past leans into the present, and the present leans against the past. This story and "Driveway" rock between the two. Section breaks give the reader a pause. Or, hopefully, pause.

There are a few ways the scene is contained, too. The present tense frame of the rest of the story literally contains the past tense memory. And then there is the language. Not only do words contain meanings, but the kind of language you use also acts to contain (heck, bottle) the emotion through understatement.

Then you slip into present tense again - the narrators slips away from the difficult emotional terrain of the memory, and speeds on ahead.

Quiet is a nice way of describing many of your sentences. They feel intimate and whispered. Can you talk about how you go about creating that feeling with language?

Yes, the present contains the past, which is still, sadly, at work. So true. As far as bottling, hmm . . . I imagine bottling as keeping something at bay, or on the shelf. In this story, the past presses on the present. She speeds away from the difficult terrain, yes, but she's on a slick road with worn down treads on her tires.

I need the quiet - the space to think - and I follow the whispers. I grew up in a boisterous Italian family where troubling events and small events alike were turned into melodrama. Melodrama usurps the truth by drawing attention to itself. I was a kid and reserved, so it was difficult for me to get a word in edgewise, but I had a lot to say about what I saw and heard. I was thinking this morning that present tense makes me feel like I'm telling a secret as much as I'm relating a story. And I'm asking the reader to be complicit, which gives me the responsibility of not loading up on one character, or on one side of the argument. I try to make my sentences clear, and uncoy, and unshockable, even though they're sometimes describing troubling events. I picture a reader who's always two steps ahead, and I write to keep him/her off balance, and engaged, head leaned in. Who can resist something that's whispered?

Final thoughts on the present tense? And can you tell us what's next for you?

Eli Horowitz of McSweeney's was introducing my story "Driveway" at Symphony Space, and he said something interesting: that I had an appreciation for "the triumph of the unseen decision." I like the idea that some of my stories don't wrap up at the end, that they might continue in the reader's mind after they've stopped on the page, because the characters are still futzing with/trying to fix their lives. There's more work to be done. Present tense feels like a story unfolding, of not yet being over, which makes sense for me because I have trouble saying goodbye.

Next, I need to finish my first novel Speeding In The Driveway, but I've gotten sidetracked by a short story I didn't mean to start that's set in New Orleans post Katrina. I haven't been able to write much about the city and aftermath of the flooding, but I think I'm ready. We'll see.

I don't know why you say goodbye, I say hello.

Matthew Simmons is the interviews editor at Hobart. He is also The Man Who Couldn't Blog.