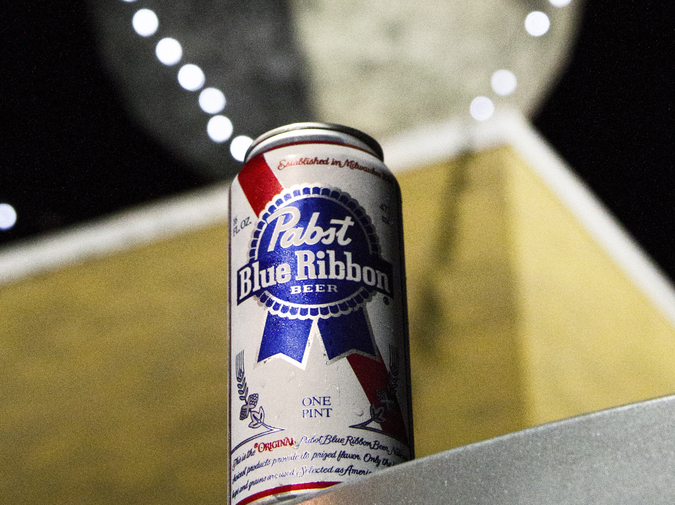 A massive plaster moon rotates above the rooftop bar, casting a milky glow over my fellow patrons. One by one their orders are placed. A vanilla bean porter with toasted nut highlights. A zwickel-style lager. A Cascade dry-hopped American pale ale. A cleanly malted and sharply hopped Czech-inspired pilsner. A cloudy hefeweizen with a hint of coriander and a tangerine wedge.  When it's my turn, however, I settle into my stool, look the bartender dead in the eyes, and ask for a good ol' cool-my-throat, warm-my-insides, and thicken-my-wallet Pabst Blue Ribbon. Soon it flows smooth as a gentle breeze over my tongue, and, in this most idyllic of moments, I realize that after much deliberation and fifteen years of field testing, I am ready to officially and heartily recommend Pabst Blue Ribbon as perfectly fit for human consumption.

Pabst Blue Ribbon, or PBR, as it's known colloquially, was released in 1882 by the talented craftsmen at Pabst Brewing Company. Though historical documentation can neither confirm nor deny claims of an illustrious 1893 blue ribbon for this now iconic beverage, one need only the taste buds of a discerning beer drinker to bestow their own informal award. After opening in Milwaukee 168 years ago, and after spending the early 2000s in an esoteric limbo as part of Miller Brewing, the Pabst Brewing Company recently moved, like so many attractive, adventurous Midwestern transplants, to Los Angeles, California, hoping to establish a successful niche in the so-called “industry.”

My first experience with PBR came about by chance, a member of a naïve group of recently car-equipped high school sophomores wandering through the seedier parts of town in a '64 Chevy Malibu. We parked behind a gas station next to the interstate, where cars whizzed into the night just like a nearby homeless man whizzed into a bush. Once he had finished, we approached the man with a ten dollar bill raised warily, like a battlefield-crossing white flag, to relay our request.

“You want fucking Pabst?” he kindly suggested through chipped teeth.

Our eyes went wide like fawns frozen in a dewy meadow when a twig snaps under a heavy boot. One of us spoke. “Cool.”

The ambiance of PBR is apparent from the moment one opens the patriotically-colored cardboard box. Overlaid on a smooth aluminum can, a red stripe borders a field of white that contains an oversized blue ribbon reminding one of prized hogs, giant pumpkins, or world-record, room-sized hamburgers. A diagonal red bar cuts from the upper left to lower right across the welcoming foyer of the can, providing only the slightest resemblance to the Confederate flag. The silver top is simply garnished with a shimmering tab.

In fact, the clever designers at Pabst Brewing Company have created a receptacle with numerous references to America's treasured past. On the can, we are reminded not once, not twice, but three times of the brewery's founding in 1844. The typeface of choice is a distantly familiar form once known as cursive. The can references the recipe's strong foundation of ingredients by displaying two sprigs of grain and two bulbs of hops. A little research indicates these images' real-life equivalents include the finest six row barley, and Yugoslavian-derived hops brought to America by inebriated Europeans nearly two centuries ago, demonstrating the beer's true staying power to outlast even communist bloc governments. Each can of PBR is like a history lesson one need only tip 30 degrees relative to the plane of their open mouth to appreciate.

Another sign of PBR's broad appeal comes from the many shapes and sizes of containers people may consume the beverage from. Cans of 12, 16, 20, and 24 ounces, bottles, quarter and half barrels, graduated cylinders and Erlenmeyer flasks, rusty teapots and skateboard helmets. I once saw a disgraced raft guide on the side of a whitewater rapid drink PBR out of his grimy river bootie after flipping his raft. Basically, anything that can hold water—and some things that can't, like clear plastic tubing attached to a funnel—can be used as a delivery device for Pabst Blue Ribbon. Pabst need not be placed into things only for the purpose of drinking. Why, one particularly industrious barbeque-ologist I encountered during a long night of field testing confidently shoved an open can of PBR into the body cavity of a chicken for flavoring and moistening.

Pabst has other uses beyond consumption. The cans can serve as minor flotation devices in the event of a water incident, and I have witnessed PBRs floating peacefully downstream from over-turned inner-tubes, followed frantically by thirsty, sun-burned college students. Pabst Blue Ribbon even works wonders as a medicinal wash for cleaning any Pabst-related lacerations, like cutting one's hand while stabbing the side of the can with a house key, cutting one's lips when putting that open gash of sharp, mangled aluminum to one's lips, or cutting one's fingers when rushing to pry back the tab.

The management at Pabst never shies away from customer feedback or making things right. Case in point, years ago my friend, a chemist, was reviewing the PBR packaging and noticed a discrepancy between the volume listed on an actual can, 355 ml, and the volume reported on the image of a can portrayed on the box, 356. The chemist pointed out the issue in an email, receiving a grateful reply within days. Only weeks later the oversight had been corrected with the box revised to match the can. In another nod to strong management, Pabst Brewing Co. is a notable supporter of the arts, specifically those arts that relate to PBR, like PBR collages, PBR water colors, PBR oil paintings, PBR murals, PBR slam poetry, and PBR flash mob dance routines. Similarly encouraged are symphonies in the keys of B, P, or R and clothing made entirely from flattened Pabst cans like PBR top hats, PBR hoop skirts, and PBR epaulet button-ups.

Pabst Blue Ribbon can be served cold or warm, with dinner, dessert, lunch, or breakfast. Many people prefer it before operating unwieldy watercraft like houseboats, or in the hours leading up to outdoor, beach-side weddings in which one is participating in the ceremony. Conversely, it can be enjoyed right after participating in team sporting events like kickball and indoor soccer, or immediately following outdoor, beach-side wedding ceremonies, when barefoot groomsmen and bridesmaids wander along the edge of the surf zone toward a reception tent set up in a nearby field. It is a beer that might have found a home with middle-aged, shrieking tea-partiers had they not abandoned their grandfather's favorite beer. Instead, it has been embraced, once ironically and now genuinely, by thrifty, skinny-legged hipsters who liked the Occupy movement in theory, but found all the scheduling to be a bit too pedantic.

Pabst Blue Ribbon has been around a long time. Pabst knows this. Pabst embraces this. Pabst celebrates this. PBR isn't a new beer that tries too hard like those micro-brew unfiltered Belgian whites floraly-infused with rose petal aromas. And PBR is not one of those beers that tries too little like Pabst Genuine Draft or Pabst Blue Ribbon Light. PBR is one of those rare beers that tries just the right amount. Like the plaster cast, oversized moon that rotates at my local bar, with the magic markered dark side constantly following the bright, whitewashed light side, or the tides inundating the rural garbage-strewn swamplands of an inland estuary, so too does PBR endure. Let us only hope, after one hundred sixty-eight years with PBR, that we have at minimum one thousand and sixty-eight years left of the brewing magic that is Pabst Blue Ribbon.

Advanced Amateur Score: A very respectable 9 cans out of 12.

To determine if he has expertise in a pursuit, Mike Bezemek often asks himself one of two questions: Am I getting any better at this? Or, am I making any money doing it? Logic follows that he is only an advanced amateur beer drinker and home brewer. His work is featured or forthcoming in publications such as St. Louis Magazine, Canoe & Kayak Magazine, Big Muddy, and elsewhere. To suggest a beer or beer-related subject for a future review, please email him at advancedamateurreviews@gmail.com.