An Abbreviated Directory of Women in Baseball 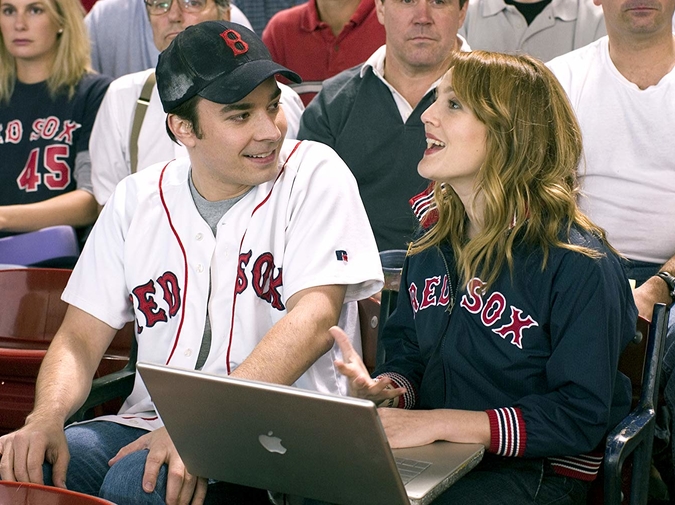 Baker, Ginny: First woman to play in the Major League. Also not a real person. Portrayed by Kylie Bunbury on FOX’s drama Pitch during the 2016 election season. The show ran for 10 episodes before getting cancelled. I muttered about injustice from beneath the benzodiazepine; some lazy lament about how even in fiction women can’t win.

Barrymore, Drew: Possibly the antidote to the Curse of the Bambino. Starred in Fever Pitch—a 2004 romcom centered around fierce Red Sox fandom—alongside Jimmy Fallon. While filming, the Sox made their “miraculous” ALCS comeback over the Yankees, winning their first World Series ring since 1918. The script was rewritten to accommodate this “blessed” event, including a scene where the pair rush the field and kiss. The historic win and subsequent celebration was broadcast to millions of viewers—overjoyed, livid, or indifferent. But no matter the affiliation, we were united in wondering: Why the fuck is Drew Barrymore on the diamond?

Galione, Lauren: My mother. The loudest woman to ever grace the sidelines of Marlboro Little League. Attended the ‘77 World Series and watched Reggie Jackson become Mr. October. Unbeknownst to her, she was sitting just a few seats apart from my father. They met in 1981 working at a supermarket on Kings Highway in Brooklyn. He accused her of stealing his prized ticket stub when he saw a near-identical one tacked to her bedroom wall.

Team mom for my sister’s Mets baseball team, but she refused to wear an enemy tee-shirt for the group photo. In it, she wears a grey Yankees shirt in protest. She beams in perpetuity.

When I was fifteen, she predicted I’d move to Boston for college and fall madly in love with a Red Sox fan. At eighteen, I moved into my freshman dormitory overlooking the Boston Common on the corner of Boylston and Tremont. By twenty-nine, her Red Sox fan prophecy had come true, too.

Goodwin, Doris Kearns: Dodgers fanatic; best known for penning presidential biographies. Released a memoir in 1997, named Wait ‘Til Next Year after the 50s-era Flatbush rally cry. My father read it to me the summer I turned eight, sitting on a wooden swing in the Poconos. It reinforced how essential the game is to girlhood, and how baseball breaks your heart if you let it. After the Dodgers left for California in ‘57, Goodwin’s broken heart ferried her love and loyalty to Red Sox Nation.

Jeter, Hannah: When I announced my intention to marry Derek Jeter to my 4th grade class, I was met with gagging noises. He's an adult! You're being gross. This, coming from my Limited Too-clad compatriots with milky pen drawings twisting up the length of their peach-fuzzed forearms.

Born Hannah Davis in 1990. Married Derek Jeter the week of my 27th birthday and now they have two daughters. Hannah is a full year younger than me. I don't hear anyone calling her gross.

Kinsella, Annie: Cinnamon-haired romantic lead in Field of Dreams. Played with zeal by Amy Madigan. Equal parts romantic and pragmatic, she raised a farm and a daughter, vanquished small-town Nazism, and offered unconditional support to her crazy-ass ghost-loving husband. And that voice! Annie remains everything I long to be. As the kids say: we stan a legend.

Madonna: Superstar and mononym. Played “All the Way” Mae, the sharp-tongued stripper turned center fielder in A League of Their Own. I watched the film on my 9th birthday, celebrating my imminent softball career on the inaugural girls’ teams in my hometown.

That’s the year I became a pink-shirted Lady Hawk. A girl named Tara snapped up the number 2 before I could get to it. When I asked if she, too, was a die-hard Derek Jeter fan she replied: “Who’s that?” I played third base and wore the number 5 on my back.

"DiMaggio?" my uncle asked through the fence when he came to see me play one Saturday.

"Mae Mordabito," I spat back mid-practice swing, then stepped into the batter's box and tried to channel her moxie.

Marshall, Penny: Born Carole Marshall on the Grand Concourse in the Bronx. Her best friend was Carrie Fisher and her favorite seats at Yankee Stadium were second row, third base side—directly in front of the seats I grew up in. First female director to gross over $100 million and responsible for bringing A League of Their Own to the masses, making a generation of girls who love to play the game feel seen. She hated when fans sung the Laverne and Shirley theme song to her between innings. She answered to Penny. She was my hero.

Mitchell, Jackie: Native of Chattanooga, Tennessee. Grew up next door to Dazzy Vance, who taught her to throw on a nearby sandlot. Struck Babe Ruth and Lou Gehrig out back to back in a 1931 exhibition game at age seventeen. Shortly after, Commissioner of Baseball Kenesaw Mountain Landis voided her contract and banned women from the sport. He claimed it was “too strenuous.” Landis was nary seen without his signature grimace. I wonder if any men ever told him to smile.

Monroe, Marilyn: Don’t forget our favorite dead starlet was married to Joe DiMaggio. When she sang “Diamonds Are a Girl’s Best Friend,” consider all the diamonds she could be alluding to.

Preiss, Alexa: My sister, five years my junior. The only lefty batter in the Preiss family. Held the distinction of being the only girl on the 7 year-old baseball team at the Marlboro Little League. The Sand Gnats. The coach was a family friend, “Vito, from the neighborhood” in Brooklyn—my parents’ version of the old country. Once when he called to let us know practice was canceled, Alexa picked up the phone thinking it was our father calling from his skyscraper on lunch break. “DADDY!” she screamed into the receiver. “......Alexa?” said the disembodied voice, Naples by way of Bensonhurst. “This is Vito.” She slammed the phone back into its cradle and refused to meet his eye for the rest of the season.

“That team was called The Mets,” Alexa corrects me now. “Sand Gnats came later when I switched to softball. The girls’ teams didn’t get MLB names.”

Preiss, Annette: My father’s mother. Born in the Bronx in 1932. Her first date with my grandfather was at Yankee Stadium in 1948. She wore an enormous pink tulle skirt her mother made just for the occasion. In 1970, she famously demanded an autograph from Phil Rizzuto, even after he rolled the window of his car up onto her arm to deter her.

Her last night on earth, I put her to bed in her apartment on Nostrand Avenue. She asked me to turn the Yankees game on TV so she could drift off to the sound of that schmuck Sonny Gray blowing it. When our greatest adversaries won the World Series, I watched the broadcast—all of Boston celebrating beneath a spray of champagne. I said: at least Annette didn’t live to see this.

Rivers, Mary: Legend has it that during a spat, she drove her Mercedes into the Yankee players’ parking lot and intentionally smashed into the side of her center fielder husband Mickey Rivers’s Cadillac. I heard another one about how Mickey asked Steinbrenner for a $10k bonus to be paid out in cash so he could hide it from her.

When my father was fourteen, he cut class and took the D train to catch an afternoon game with a buddy. Entering the lot through a hole in the fence by the neighboring paddleball courts, he approached a newly-pinstriped Rivers for an autograph. Mary emerged behind him, yelling, “You don’t need to sign for them, Mickey! You’re a STAR!”

Waldman, Suzyn: Sportscaster in a boys’ club. I can summon the sound of her voice as readily as those of my kith and kin. A Toronto outfielder named George Bell cursed her out in the locker room when she was new, just trying to get a quote alongside the scrum of reporters. Stifling tears, she shuffled her items and retreated. A kinder Blue Jay named Jesse Barfield stopped her on her way out and said, “Hey Suzyn, I went three for four today. Wanna ask me any questions?”

I have known so many Georges. When the Jesses walk into your life, hold tight.

Yankee Widows: I know there’s no crying in baseball but when they walk out onto the field for Old Timer’s Day, I make an exception. Sisters in sport and sorrow. Diana Munson. Kay Murcer. Helen Hunter. Arlene Howard. Jill Martin. Lauded for merely representing the men who left them, and us, behind. I cheer, too, but what I really want to do is take them to dinner and explore their humanity—ask them what it’s like to occupy such an odd corner of culture and also maybe what sort of books they like to read.

Courtney Preiss is a writer living in Brooklyn. She was born on July 7th, weighing 7 pounds and 7 ounces and her parents didn't name her after Mickey Mantle. Can you believe it?