All Of These Scenes Are Harshly Lit 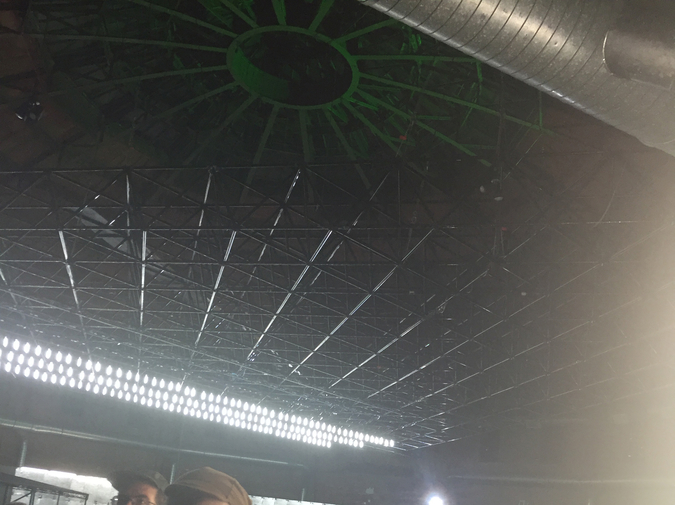 Mom kept her running trophies on the corner table in the kitchen. “How’d you get those?” “I used to like running away from my peers.” Five years later and Sophie learned what peers meant, remembered the answer and laughed. Ten years later and Sophie learned which event Mom ran. Mom was dead now. At the funeral Mom’s old friends talked to Sophie for a long time. “The 400. For a while. Then anchor on the relay team. School records in both of those. Such long legs.” Sophie told them the story about asking Mom in the kitchen what the trophies were for and what Mom said. The big old ladies laughed.

Mom used to homeschool Sophie. The day after the funeral was June 6th. Sophie would go to public school in September. She woke up early and dressed in old sweatpants and one of the baggy shirts Mom used to wear when she was painting a part of the house. Sophie went out behind the house and ran. She ran three miles into the woods back there not knowing it was three miles. How good it was to be out doing this with the birds sitting around in the trees and making indifferent bird noise. When was the last time she ran? At all? As a real kid in bare feet in grass at her grandparents’ house. All four of the grandparents lived together on the closest thing that could be called a real mountain. They were still alive and would not die.

Sophie got really sweaty and stayed like that laying out in the sun behind the house when she came back from running. The 8AM sunlight pushed the sweat into her skin and it was tarry when she felt it with her narrow fingers.

She did her research on track and field, wanting to try out when she got to school. The only tape measure in the garage was 25 ft. The math didn’t take long to work out. Sophie used the tape measure and sticks to measure and mark out the ghost of a ¼ mile track. It was a decent open space she was using that had not many trees and that piled up mud from the hills around pretty good after it rained, especially in spring or fall when the grass was not as strong. That made it real, to have something to run around, and in a spot where people didn’t come. She would go there to be alone and then remember to run or go there to run and enjoy the being alone by accident. It was where she felt ok about being in only a sports bra and small cotton shorts. And in the quiet one day in July she stood in the wind and even took those off to better be a part of that moment.

Her youngness made it easy to improve and now she was a runner. Legs getting tighter and arms learning how to move while she ran without instruction. Massaged her legs before bed and took hot showers and left the water running after she got out and sat on the toilet to be in the steam. Used her anxiety as fuel. Worked longer, harder and threw up in the grass sometimes, but that was fine because it feels good to be finished throwing up.

Not too many kids just getting into high school know who they are. But Sophie knew that she wanted to do this and there was a chance she was really good. Obviously no way to tell out in the field whether she was setting records or had good form, but it was hereditary, at least a bit. And she’d worked so hard. There was potential to be well-known for this. Even just around the school would be ok. The running made her newness acceptable and pulled the color out of her worries.

The first week had confidence under it because there was a talent in her that wasn’t surface-level. Would be proved on Friday afternoon during the tryouts up at the football field. The track was rubber and felt like space walking compared to her field, but she liked having the bounce and thought it would help her. And Sophie didn’t think it in a mean way but lots of the girls looked out of shape. Some of them not. One girl was six feet, or more. She was toned and had an always-serious face. That would be the best girl. Sophie would not be the best girl. Sophie didn’t mind. She would get on this team and have automatic friends for four years. They would have knowing smiles when passing unexpectedly in the hallways because of shared time and thoughts and stories of failing the driver’s test and fucking for the first time or worrying about not.

She noticed something else watching the girls jog the track.

“My name is Sophie Cabbott.”

“I heard it on the announcement that you were the coach.”

“I just had a question.”

“Do we always run counter-clockwise?”

“Why is it the standard?”

“I’m not really sure. I’ll get back to you on that.” The smile of an adult wordlessly ending a conversation with a kid.

She’d been running clockwise all summer. Never once the other way. Always clockwise. It wasn’t really that significant. She could adjust. But she didn’t know that the could adjust. Her synapses had foam between them. They lined up for the first race, one lap around.

Sophie was out in front at the first turn. It was technically possible that she would always be in front like this, with only distant competition. She was her mother, successful and vibrant. She took the turn like it was a big deal, overcompensated, and her left ankle folded. The really tall girl kept running but the rest bunched around Sophie and were quiet with their arms folded, panting. The trainer sighed because it was too early in the season to have to deal with this and touched the ankle and asked questions. The coach came over to help the trainer get her off the field. Coach Linda spoke like nothing was wrong and never could be.

“I looked it up on my phone, Sophie. Apparently it’s counter-clockwise in the northern hemisphere to counteract the directional forces of gravitational pull. That’s just a theory, though. There’s also a wilder guess that it has to do with traditions going back to chariot racing in ancient Rome and how they held the whip in the dominant hand and that made it easier to turn left than right. Really fascinating. I’ve been running for years and never even wondered why.”

Sophie did her best to be angry at the ancient Romans, who had somehow done this to her.

If Sophie had wrecked her ankle three weeks later, after making the team and making friends, she would’ve gotten an overflow of sympathy and nice handmade cards and candy while laid up for the next couple days. But it happened before anybody but the coach knew her name. The other girls watched her get carried off and asked each other who she was. Nobody knew.

Michael Schuck was recently rejected by several of the country's top graduate schools. His first novella, The Incredible Superfets, is difficult to find and therefore purchase, but it does indeed exist. He accepts malicious comments at 724-825-2749 in lieu of a social media presence.