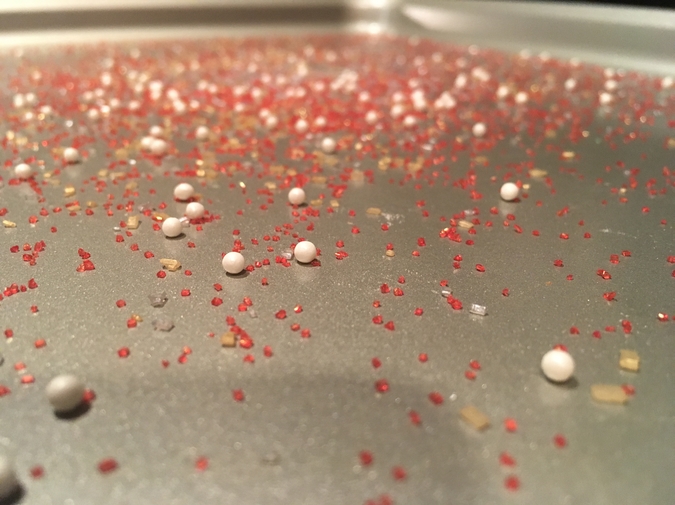 We’re riding the red line south when Xue suggests stopping in Chinatown to purchase thousand-year eggs. I picture her cracking open an enormous egg and a pterodactyl flying out.  “They’re not really a thousand years old?” I ask.

Xue slugs me in the arm. She’s always slugging me in the arm. According to her, physical abuse is the Chinese way of showing affection. Though somewhat strange, I admire that she upholds traditions. The only tradition in my family is pointing out each other’s flaws on holidays. I do not come from a cultured people.

I feign vomiting. Xue makes me promise to taste one. She refuses to date someone who isn’t adventurous.

What she really means is she’s tired of life being so damn predictable. For last fifty years, her life has been micro-managed, first by her parents, then her ex-husband.

Which why she’s dating me. I’m twelve years younger.

“You know the phrase, if I only knew then what I know now I’d do things differently. Being with you is like getting that chance,” she says.

I’ve never dated an older woman before. Not that I think of Xue as old. Other than a few random strands of white hair, she probably hasn’t aged since college. She wears t-shirts with corny catchphrases and a pair of dirty Chuck Taylors with the shoelaces untied. When she isn’t spouting off on a tangent about the latest technology she’s playing video games on her phone.

I’m as outdated as landlines. Ask me about the latest anything I’ll give you an answer that’s obsolete.

Once when Xue was talking about Androids I asked her which Sci-Fi novel she was referring to. When she realized I wasn’t being sarcastic she asked me, “What planet are you from?”

I point at the four gold characters spanning across the Chinatown gate above Wentworth Avenue. “What does that say?”

While crossing the Pacific, her mother learned English by imitating the crewmembers on the ship. By the time she reached San Francisco she could speak perfect slang. These days she’s an immigration lawyer.

“Imagine living up to those expectations,” Xue says.

My parents only expected me to graduate high school, not get thrown in jail, and procreate. Yet, I’ve disappointed them.

We wonder which of us had it worse.

Statues of the twelve signs of the Zodiac form a triangle around the Square. Xue asks my birthyear then pesters me to pose for a photo in front of the dragon. She explains it symbolizes good luck. My family claims we’re cursed. Supposedly, my last name means unfortunate in German. It’s why I’ve never expected to achieve much in life.

Xue proposes I shave. The Chinese believe it’s bad luck to grow facial hair. I believe my luck has more to do with self-esteem issues.

“What does it symbolize?”

Compared to the fancy temple-like structures of surrounding establishments, the restaurant Xue chooses is a little hut. The floor isn’t mud, but it might as well be. Birds carcasses hang in the windows. Fly strips are part of the decor. Everyone on the entire staff is somehow related.

Translation: The food is authentic.

Xue orders several items from the menu, pronouncing them incorrectly. The waitress politely corrects her, but I can tell she’s annoyed. The unusual feast consists of small portions of organisms I associate with biology class. We split a pot of chrysanthemum tea to wash it down.

Xue hardly touches a thing. She watches as I test my palette. A primary health care provider would call this process “quality assurance.” Though I’m reluctant at first, I eat everything without getting ill. I equate the experience to the Buddhists concept of Satori.

Xue reaches over the table and wiggles her finger through a cigarette burn in my sweater. “You need to stop wearing clothes with holes. It can lead to poverty.”

I tell her the reason my clothes have holes is because I’m poor.

“Anything else I should know?”

“Never clip your nails at night. Not unless you want to be visited by ghosts.”

Xue should never make her friends eat sea cucumbers. Not unless she wants to remain alone.

A few years ago, Xue went through a horrible divorce. She compares her marriage to programming a computer. “When we went out to dinner he insisted on ordering. For the longest time afterwards, I had difficulties looking at a menu and deciding what I wanted.”

Her ex even forged her signature on the divorce papers. She said that’s what she gets for marrying an air traffic controller.

I tell her about my ex-girlfriend who broke up with me on my birthday. She gave me a card explaining all the reasons she didn’t want to date me and a chocolate cake to remind me what I was going to miss. It took a long time to get the taste out of my mouth.

“How did you finally get rid of the taste?” Xue asks.

Xue notices the shocked look on my face. “Welcome to the aisle of scary preserved things,” she says.

Stacked on wooden shelves in a corner of the grocery store are glass jars with strange things sealed inside. Picture a mad scientist’s lab. There are fuzzy things. Prickly things. Gelatinous things. Moldy things. Things that go bump in the night. There are things with bodies missing a head. Other things have a head but no body. There are things that can only be described as things.

But all these things have one thing in common: They’re edible.

“What are these…things?” I ask.

Xue says they’re what you get when you breed an elephant with a rhino.

Music plays softly in the background. Not the kind you hear in kung-fu films, but not not like that either. Because the labels are written in Chinese we have to guess what’s inside from the pictures. We invent a game called “Mystery Shopping.”

We search the entire store but are unable to find thousand-year eggs. The staff smokes and reads newspapers and generally ignores us.

Under her breath, Xue replies, “Are you kidding? They’ll laugh at me.”

I can’t understand why. Isn’t this their job?

“It’s because I’m Chinese but not Chinese,” she says.

“Don’t take it personally if you get the same result,” she says.

I approach an elderly man stocking cans. I ask him where I can find thousand-year eggs. He repeats what I’ve said, pronouncing every syllable like he’s speaking them for the first time, then throws back his head and laughs.

By the time I return, Xue has found the thousand-year eggs and is waiting in line. She smiles at me. “I told you so.”

Xue wasn’t lying. She’s a total slob. Walk two steps in any direction in her apartment and you’re bound to trip over something. She flings her purse on the sofa amongst the piles of random debris then leads me into the kitchen. She doesn’t apologize for the mess.

According to Xue, both her parents and ex-husband are antique collectors. You couldn’t touch anything without permission. So when she moved into her own apartment she purposely bought second-hand furniture from second-rate stores. It’s the first time she’s ever felt at home.

My place is neat but spare. I don’t own much because my ex kept most of our belongings after the break-up When I tried to get the stuff back she promised to drop it off. After that she stopped returning my calls.

Xue clears a space on the counter with a sweep of her arm and tears open the box of thousand-year eggs. Arranged inside a plastic tray are six eggs the color and texture of a tire. From the cluttered sink, she pulls a serrated knife and gives it a couple good swipes on her pant leg. She cuts an egg in half. Green yolk that smells like sulfur oozes from the inside. I can’t believe she expects me to eat it. But being with Xue, I never know what to expect.

Picking up the two halves, she tells me a Chinese folk tale. “For thousands of years the universe was like an egg. Inside, chaos slept. Then one day the egg cracked in half and chaos hatched. The upper portion of the shell became the sky, the lower half the earth, and from chaos, life was born.”

Holding the egg up to my mouth, she says, “Now open wide.”

Jeremy Kniola resides in Chicago, where he attends UIC and lives with girlfriend and pets. His fiction has appeared in Dogzplot, Literary Orphans, Big Jewel, among others. You may find him writing in a cafe near you. He wears glasses.