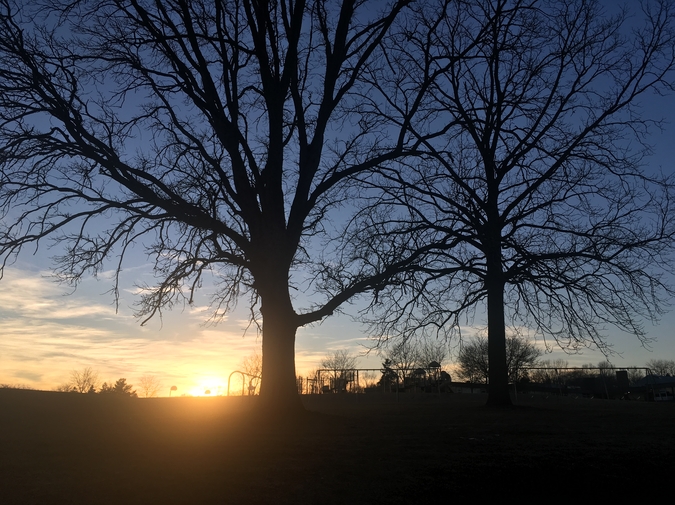 After school the boy skipped practice so she could take him for a drive. He reclined in the passenger seat, admiring her new license. A five pound duck sat thawing in his lap. His arms were pink and raw. She stared straight ahead, loosely cradling the steering wheel, combing her fingers through the rushing air.

About earlier, he had started to say —

— is that all you can think about, your duck?

He tried to play it off as if he were joking. He couldn't tell if she was feeling funny or cruel. She turned to him, let out a quack, and laughed.

It was a nice, old neighborhood: trees crowded together above streetlights. The blocks were named Butternut and Hornbeam.

Who lives there? She asked, pointing to a mid-century modern.

Probably a doctor. She seemed sure.

She slowed down and stared. Flat slabs of roof layered atop one another. Between them, glass windows. Lights were on, but they couldn't see anybody inside. All that was missing was a waterfall.

They came to a stop. She took a left and passed the park for a third time. He watched as streetlights passed overhead, illuminating her thigh with thick, vivid bands of yellow. She turned to him and quacked a second time.

Earlier, they had been at that park. It was near dusk. Now and then she would turn and climb on top of him, press her body against his. She made excuses to be near him; her fingertips touching his while they shared a cigarette, grabbing his wrists and hips and arranging him just so. She complained the grass would cause her to break out in hives. He shifted on the grass, struggled awkwardly. He closed his eyes, trying to think of something gruesome. His mom in a car accident, for example. But he couldn't ignore the soft body. His heart was in fits and it was difficult, positioned as they were, to make any real conversation.

I want to have sex today, she announced.

He didn't know what to say.

It was getting dark now, and only the faint outlines of the trees were discernible. She pushed herself up so that she straddled him. She dragged herself against him.

He hesitated a moment. That was all it took.

Let's get some condoms, she said.

Now he looked away, pressed his palms into the earth. All around were cicadas, fireflies appeared and disappeared. His hands trembled.

When they got to the store, they went around messing with everything except the condoms. In produce, she found a banana and two oranges and made thrusting motions. In meats, he flailed about a fat, smoked Italian sausage. They passed a bin of dodge balls, and he had her post him up, dunked on her. They went over to the greeting cards and took turns writing anecdotes about dicks inside of them.

My parents are out of town, she said. Wouldn't it be funny if we pretended like we were my parents and cooked dinner together and went to bed unhappy and unfucked? She pressed against his arm while speaking.

Uh oh, I'm in the dog house, he said, playing along with her game. Maybe I called our son a faggot at the dinner table after my second glass of Jameson. Maybe I said something funny about your second helping of potatoes.

She laughed and felt his fingers. That was when they found the duck.

Later that night he lay on her parents' couch. He was alone and he couldn't sleep. He opened his wallet, removed his license, turned over a condom his older brother had given him. She was asleep upstairs. A few hours earlier, the two of them had been on the couch together — the look on her face when she realized what they had forgotten. He took a deep breath and went to the kitchen for a glass of water and saw the duck in the sink, still thawing.

Years later, he would try to tell his buddies about that night over beers. "She was crazy," he would repeat, trying to get it right. But he would be drunk, mangle the details. "She was crazy. Crazy." He'd put his beer down on the table only to snatch it back up, pointing at them each time he said it: crazy. "So fucking crazy." He would tell the guys about the duck, the goddamn five pound duck. "At the end of the day, all I had was that duck in my hands." Everyone would laugh but him.

P.J. McCain lives on the south side of Chicago alongside eleven reptiles, a cat, two dogs, and his fiancée Joanna. His stories have appeared in The Wordeater and Dual Coast Magazine. www.pjmccain.com.