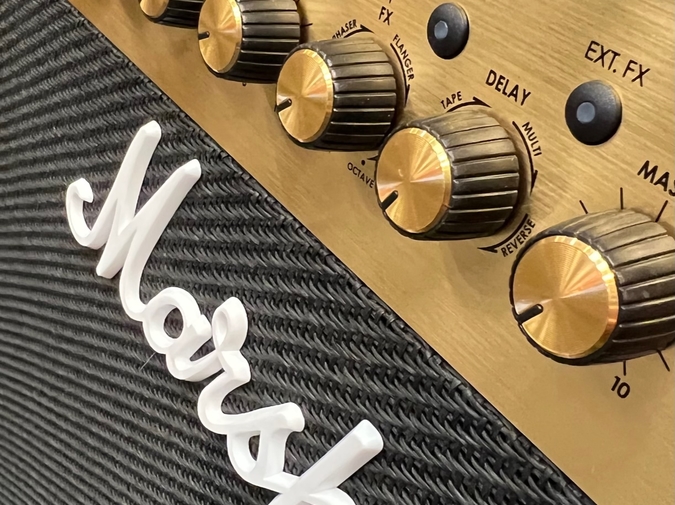 A tiny Angus resides in the right speaker of our sound system, a miniature Malcolm in the left. The speakers are their homes now; feisty gollums, full of evil magic and beholden only to the power of rock. Out for all they can get. Hail, hail to the good times.

For the uninitiated, let it be known that the Brothers Young do not mess around. Hell no. They are insistent, rock steady, undeniable in the commitment to high voltage riffage at maximum volume. Powerage is the MO. All the way.

Our boy conjured them forth, recently. Riff raff have been here ever since. Not since my own youthful minor hockey days have Angus and the boys pummeled my ear drums so incessantly. It's AC/DC or bust around here, lately. In rock, we trust. Amen.

When the boy turned six, he asked for a Gibson SG. Like Angus. Fuckin A. Fat chance though, bud. Come on. Lack of money talks, too. Louder, still.

Instead, I cut the profile of an SG out of a cardboard box, taped a strap onto the back. The boy did it up with shiny red tape and black marker to look pretty dang close to Angus’s trademark rig. Close enough for a six year old, anyhow.

That cardboard guitar stayed glued to the boy for days, weeks even, as he duckwalked the floor of our modest home. Spellbound, he even dressed like Angus, donning short blue shorts, a button down shirt (if he wore one at all), and a black ball cap he affixed a red A to out of tape. The sneer he wore, too, was spot on. A rocker clone, blown outta the video in lockstep with the alpha Angus, controlled by the sinister vibrations in the air.

At the same time, my buddy Bones gave us his electric drum kit on extended loan. For the boy’s birthday, his grandparents got him a month of drum lessons at the music store down the road. He quickly picked up the basics, the foundation each and every AC/DC tune is built to shake whenever the amps are plugged in.

Before long, the boy was clamoring for us to recreate those sounds ourselves. With pleasure, I dusted off my old Jackson X Series, plugged into a battered little Peavey and got to it, relishing each raw moment. Calluses returned to my playing hand overnight. My thinning hair grew longer, thicker by the hour. My disdain for authority intensified on the hour, while faded tattoos rejuvenated. My soul cut loose from 9-5 noose that had tightened itself unbeknownst some time ago. Rock n roll damnation is thick as blood, in this house. I’m glad to be back.

Meanwhile, even baby gal’s stomping around the house singing, Watch me explode! Let there be rock, eh? Hell yes.

Who Made Who? Who, indeed.

Colouring: T.N.T.
Dress-up: Shoot to Thrill.
Playing with blocks: This House Is On Fire.
Clean up: If You Want Blood (You Got It).
Dinner time: Dirty Deeds Done Dirt Cheap.
Bed time: Hells Bells.

The boy wears not one but two AC/DC shirts on the reg, stickers and patches too, to go with the stack of tapes and vinyl I’ve procured from the used bargain bins over the years. The power of rock is almost too much for his body, too much for his young brain to handle. But not quite. He is possessed, proselytizing the gospel of the Young Bros & Co in the school yard, classroom, the soccer pitch and beyond. Oi, oi, oi!

These gollums, the miniature demons the boy conjured forth to become permanent residents of our speakers, their appetite for rock must be constantly sated. At times, it has driven my wife near to a nervous shakedown, though she maintains a stiff upper lip about the whole thing. We did buy the boy headphones, though that only brought the mischievous elves right into his ear holes with a flick of the switch. Pint-sized Angus, attacking from the right; Mini Malcolm from the left.

AC/DC just makes my ears bigger, the boy tells me, brain shaking. You and me both, bud.

Big Balls.
She’s Got Balls.
Ballbreaker.
Giving The Dog a Bone.
Let Me Put My Love Into You.

The list goes on (and on and on). But life’s like that, right? Dirty, mean, mighty unclean. Sometimes it’s better just to leave something by the wayside. He’ll figure it out one day. Until then, just ride on.

Ride on the Youngs do. On and on forever. Sure, Malcolm’s left this astral plain, and one wonders how long Angus can keep on truckin’. But rock n roll ain’t noise pollution; it’s the lifeblood, pal. Hell ain’t a bad place to be. It all comes down to the company you keep. While we’ve yet to set plates at the table for Angus or Malcolm here in our humble abode, that may well come in time. They’ve already made themselves at home. Our welcome guests. We salute them, horns raised in defiance towards the empty heavens above. Fire!

Sheldon Birnie is a writer, dad, and washed up musician from Winnipeg, Manitoba, Canada who can be found online @badguybirnie.