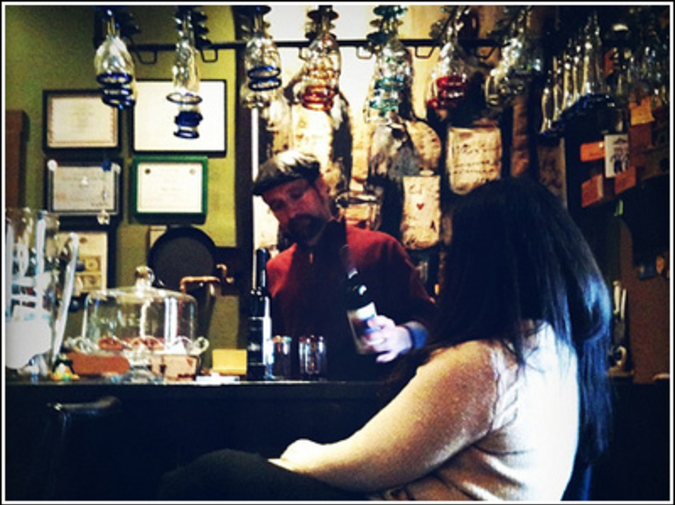 We Couldn't All Be Cowboys

Timmy Pringle always told everyone he wasn't named after a chip, and then when he started to wear sunglasses inside like he saw in a movie but everyone made fun of him he told us that he had pink-eye so he had to. That was in ninth grade. It was in the tenth grade that he told the gym teacher he couldn't go swimming because he didn't have a bathing suit and the gym teacher threw Timmy in the pool with all his clothes on and his gray corduroys stuck to his skinny legs all through Algebra and History of the US. Then Chrissy Greely told us after a party our junior year that when he was drunk Timmy confessed that sometimes he put peanut butter on his balls and let his dog lick it off, and the best part was that everyone knew he only had one nut. But after that he moved away the summer before we were going to be seniors, and someone said then that he lied about his age and became a Navy SEAL, although Jenny Leiberman told Josh that Timmy was in California dealing acid and her best friend Marcia said he actually had been doing that but now he was in jail and Josh added that Timmy was recently running the tilt-a-whirl at the fair, he thought. The thing that I knew, though, was that he became an emancipated minor to get away from his asshole father and moved a couple towns over. So I told everyone that Timmy was making two-hundred-thousand-dollars a year on a fishing boat in Alaska.

How to Grill Absolutely Everything

It arrived in the mail at noon. The new, summer issue of a magazine that could be about cooking, but is really about rich people. Paul bought us a subscription. It is, I can tell, part of his vision of our new life. Now that he has bought me a ring, and we have moved into a different, not new, still crampy apartment in the same city where we have always lived, Paul has the power of invention. He can see us taking turns with the corkscrew, and sipping wine, preparing dinners that require a variety of pots. He can hear the suck and smack of the cork pulling loose from the neck. I can almost see it too, this new life. The not-expensive wine, the kitchen filled with steam and the grill on the covered third-floor porch smoking on a drizzling night.

What I can't stop thinking about, standing by the mailbox and caressing the glossy pages, is a night before Paul, when I was in college. We had mixed a pitcher of martinis because we had been reading Salinger. It was summer, and four of us were outside at an off-campus house, sloshing olives out of mismatched mugs. The house seemed miles from anything. We seemed complete and alone in the night. Ellen had a copy of Consumer Report's How to Clean Absolutely Anything in her left hand. It was a time in our lives when we thought everyone should try everything at least once, and none of us knew anyone who wrote copy for a living. Ellen had said something about capitalism, and real authors, and Nazis.

I was the one who took the book from her hands. Crouched down on the asphalt walkway, we spilled some lighter fluid and tossed on a cigarette. Pulled our heads back just in time not to singe eyebrows or lashes. We took turns tearing Consumer Report pages from their spine and nourishing the flames, burning blue and muted green and low. The cover smoldered much longer than the cheap, newsprint pages. When it was all over, we sat watching the last of the embers scatter harmlessly in the breeze. There was a blackened stain on the walk we couldn't get rid of.

Now, at the mailbox, I leave the bills and flyers and bring How to Grill Absolutely Everythingupstairs to the kitchen. In the refrigerator, I find a half-empty bottle of white wine, and put the chill lip to my mouth for a long drink. I keep the bottle next to me, in case of emergency. I light one of the burners on the gas stove, and feed one page after another into the little blue flare. The pages burn in slabs, sending sections of ashes, lighter than air, toward the ceiling. After three pages, the smoke detector starts screeching, but I stand there until it is done, listening and not listening as the warning gets louder and more frantic.

After the fall of the Berlin Wall, I started worrying about my hair. Brown hair goes gray at the same rate as blonde hair, I guess, but gray shows up much more against the brown. Carly Stevenson, my best friend who is blonde, says, "there are worse things than going gray at our age," taking a sip of her coffee.

"Definitely," I respond, thinking of varicose veins and loose neck fat, neither of which I have thank god, and also because I didn't want to sound too sniveling this early in the morning. Eventually most people go gray, so it's not like it was my particular cross to bear, and I know this. For a long time, though, I have been thinking about the way in which a person gets older. Gorbachev takes power in a country you thought you knew, the Berlin Wall falls, your children start leaving your car in the driveway instead of the garage which you suspect is because they were stoned when they drove it home and didn't want to risk pulling it in beside the bikes and the canoe; and along with all this, no, because of all this, you start to go gray.

"Heaven," says Carly, obviously thinking along the same lines as me, "is a place where your children are four years old and asleep in their beds with their stuffed animals all the time and forever and all you have to do is sit next to them and look like you are twenty."

I nod my head in agreement because Carly does have a way of getting to the point that I can't quite master, but I don't like her to talk about Heaven really, because it makes me think of death. Just because I have a few gray hairs, one dead husband, several disappeared lovers, a cat buried in the backyard, and children who will leave the house soon, for good I suspect, doesn't mean that I am all that old. "Kids," I say, "are the way to measure it I guess: how many, how old, how troublesome, and what they will inherit."

"Lovers used to be the yardstick: how many, how old, and how troublesome," responds Carly as she lays down her mug.

"No, I'm trying to cut back on all that: caffeine, kids, lovers, trouble."

"Oh," I sigh, where once I would have giggled. Probably this is a joke coming from Carly, but it gets me thinking.

"Remember when that kind of love was all we used to think about, and the only worry we had about kids was taken care of by the presence of a prophylactic?" She really talks like that.

Today though, with coffee and Carly and when she puts it that way, I'm not sure that I envy myself those old worries. Until I really stop and remember, I forget that those times were also about not enough heat in the apartment and the co-star of a monkey being elected to the White House and eating condensed soup every night and phone calls that never came even when the company hadn't shut off the service. Varicose veins notwithstanding, maybe it doesn't have to be just the children who inherit the bright new world order. "Well," I say to Carly, "it's not exactly like we forgot all about the condoms when the kids were born." X-ed out names in my address book attest to this.

"Yeah," says Carly, trying and failing to cover a grin full of reminiscence with her coffee cup. Zipping her sweatshirt, Carly gets up to go get her son from the train station and I think that when she's gone, and after I've washed the cups, maybe I'll get out my old address book and make some phone calls.

Amy L. Clark is assistant professor of English composition at Pine Manor College. Her work has appeared in many literary journals, and her collection,Wanting, is part of the book, A Peculiar Feeling of Restlessness (Rose Metal Press). Her online home iswww.overtimewriting.com. Amy is still planning to be a rocket surgeon when she grows up.