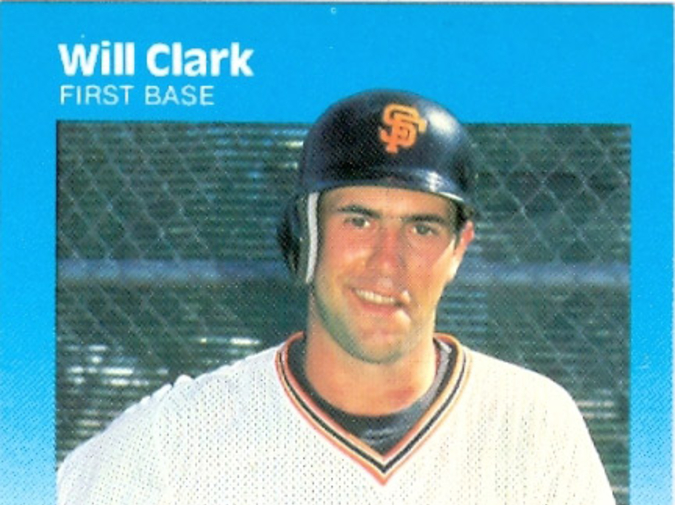 Growing up my favorite ball player was Will Clark. Will the Thrill. Number 22 of the San Fran Gigantes. That sweet swing like some kind of ballet move. Wanding his bat like it was a badminton racquet. I had his rookie card. Fleer, Topps, Upper Deck. Remember when that Fleer was worth $27.00. Such wealth for a fifth grader. Kept it in the thick plastic card protector next to Kirby Puckett and Juan Gonzalez and Ray Lankford and that fiery devil Roberto Alomar. About the Ray Lankford card – I paid five bucks for his autograph when he showed up at the community college baseball card expo. He was like a hero, played for the Cardinals, just across the river in STL. Played hard and hustled good.  Will hit his first homer off Nolan Ryan. Every now and then I look it up on YouTube. Wang, out it goes. That herky-jerky gallop around the diamond. Grainy film, the orange and yellow of Nolan’s Astros uniform blurring to cold mustard. Will clapping after stepping on home, then pointing to someone, a sharp chop of the hand.

I wasn’t much of a ballplayer. In little league I held my bat like Will. Tried to, at least. Kept it dangling off my shoulder, the barrel down my back, wiggling it just so. I lived with my mother back then. Her and my little brother at the Brookside Manor. The friends I made there. We hit tennis balls into the towering pines and oaks. Ran on bases made out of piles of leaves, bundled up T-shirts. To practice my swings, to get strong, I hit my Easton aluminum against the maple trunks. Tree trunks are hard and my bat soon wrinkled with hairline cracks and made a hollow whop sound when I made contact.

Because I lived with my mother, I didn’t wear a cup. I was too scared to ask for one.  Even after our assistant coach Terry warned us of the dangers of racking our tools. Living with ma was the same reason I didn’t shave till I was 15. I had a stepfather by then. Gave me his electric razor. An Emerson.

On the little league field, I didn’t know much. A buddy had to show me how to field, how to lower my knee behind my glove in the event the ball skidded below the leather. Game time, I had some misconceptions that were cleared up fast. That it was impossible to slide through the second baseman’s legs four feet off the bag like in the movies, that swinging really hard would not tally up the homers and throwing the bat afterward would not solve my hitting woes. That throwing the ball ten feet over the catcher’s head, though a fine throwing feat from centerfield, did not make an out.

I was a soccer player and I wore my soccer cleats. Mitres striped with crazy zags of green neon. Nobody seemed to notice. This kid Chris (middle name Demetrius), with his English mother and Cyprian father, wore the same Pacific Circle shorts he wore to school, the same Nike (no Air) low tops. What a mélange. I did have the white pants, though, and a nice glove, and a black batting glove that I cherished like some expensive, finely pelted pet.

What I liked about Will Clark was he didn’t look like an athlete. He looked like the Mississippian that he was. I could picture him in faded denim overalls and a checkered shirt, legs crossed at the ankles, a stream thick with algae and crawdads piping by at the edge of his property. He just didn’t look like much. Like he should’ve been playing ball in the ‘50s. Washing away his hangover by shooting down a beer and two raw eggs, then grabbing up the pine, taking a few practice hacks before stepping into the batter’s box and easing the ball deep over the center-right wall.

That was my dream but all I did was strike out and throw my bat and cry and overthrow the catcher, the second baseman, everybody. Being fast, I got moved to the infield. Maybe not having to throw far, the coaches thought I wouldn’t try so hard. Maybe it was one of those democratic things. Give the kids who could really play ball a rest in right field, in left. All I felt was terror. I was exposed, unable to dawdle in the crisp, dry grass of the outfield, where the hitters and playmakers prowled bored and sour.

Somehow I turned two double plays. The first one happened when the shortstop freaked and threw the ball to me overhand from four feet away, instead of covering second base and throwing to first himself. I caught the ball with my mouth. The shock must’ve awoken some latent baseball talent in me. I scooped the ball from the dirt, hit the bag and chucked the ball over to first. Two outs, easy as spitting sunflower seeds or snapping a wad of Big League Chew. The glow I felt. The next one was a line drive I butterfly netted out of the air on a prayer. The runner on first was already halfway to second and I arced the ball over his head into the basket of the first baseman’s glove. Ah. Glory.

And then I hit a homerun. I didn’t even swing hard. Just lolled my bat around and off the ball went. It soared high into the humid air of the afternoon. I started my trot. So happy. It lifted and lifted. I rounded first, running quick. It had been so easy, so natural. Such a thrill. And then the ball began to fall. And the center fielder drifted back. Leaned against the chain link, and hauled in the ball. I stopped. Disappointed, I turned back and jogged to the dugout.

I didn’t last much longer in little league. I think I puttered out around 8th grade. Devoted myself to the long pitch, the bouncing rubber ball. In ’94, Will started playing for the Rangers. I caught a couple games on ESPN, watched for the thrill, the looping swing, but didn’t see it. It was like that magic was tied to the swirling winds at Candlestick, the company of Kevin and Matt Williams, the crunching, shifting, danger-making dirt near the San Andreas.

Later yet, I saw Will on TV again. He was in a duck blind, a duck call whistle hanging out of his mouth. He was clad in camo and talking low. I don’t remember what he said. Probably something about patience. He was holding a gun, looked all that was comfort and ease.

That Fleer rookie card of his, the 1987 Fleer, it’s still worth 25 bucks. I looked it up on the internet. I think I still have it. I think it’s at my ma’s house down south. Still in its plastic house, safe from dust, the elements. I’ll have to look for it next time I visit. Tell her how I was scared to ask her to buy me a cup. Laugh about it. Drink some coffee and give her a hug. Ask her if she remembers Will the Thrill. I know she will. That she’ll remember the frumpy white guy who used to smack the homers for the Gigantes.

Edmund Sandoval lives in Madison, Wisconsin. His work has appeared in Necessary Fiction, Waccamaw Journal, Hobart, Nat.Brut, and others. He has stories forthcoming with the minnesota review, Writing Tomorrow, Unmanned Press, and The Common.