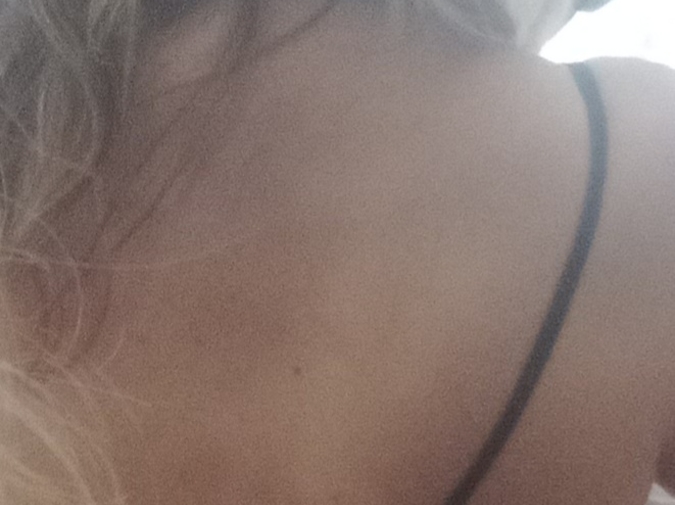 Britney Spears: patron saint of fluffy blondes, red latex, vocals twinged with a robotic gravel, perfume that smells like a cupcake bloomed out of a flowering jasmine, iced Starbucks, tramp stamps, snakes, the state of Louisiana, swiveling hips and belly button jewelry so sparkly that it must be a princess cut.

When I say that I am an American woman, I mean that I love and have loved Britney Spears. I mean that I bought ...baby, one more time at Best Buy in San Antonio, Texas over two decades ago. I traded my allowance for the thick plastic of a CD case and played her tinny voice in my blue walkman from the backseat of my parent’s car. I tried and failed to make my pudgy child body move with the sexy staccato confidence of Britney. I mean that I have watched her, listened to her, consumed her in one way or another to the point where I cannot conceptualize this country or whatever the fuck it means to be a woman, or the internet, or my life without her. I cannot picture a life where Britney isn’t somewhere, singing, writhing, performing for me and you and everyone we know.

If you scroll through Britney Spears’ Instagram, you’ll notice Britney’s favorite angle is head on: pupils gazing upwards at the lens, lips a straight but slightly puckered thin line, consistently thick eyeliner framing her brown eyes, the top lid lined just as heavily as the bottom, embracing her eyeball like a sliced black olive. Britney’s hair is most frequently down, golden blonde strands melt onto the glitzy tan of her shoulders; her bangs puff out from her forehead in a hair-sprayed exhale. Britney’s hands are usually in her pockets, as she walks back and forth in front of the camera or simply stares up at it: transfixed and transfixing. The apathy she wears on her face contrasts with her effusive use of emojis, exclamation points and erratic use of caps lock. You’ll notice that she frequently talks about dessert.

I want dessert. Now, says Britney on October 4th, while on vacation in French Polynesia. She blinks impossibly big, blue cartoon eyes provided by a filter that makes her look like an animation, already tiny nose pinched so small that it rivals the barely there button nose of Disney’s Snow White’s. On September 10th, Britney posted a photo of a scoop of strawberry ice cream, pink as a serpent’s tongue, plopped into a waffle cone with the caption “Yum” with 10 ‘m’s and an ice cream cone emoji. On February 18th, a stack of six scoops of ice cream teeter on a pointy cone, with Britney talking about trying ‘the ice cream diet’ and her favorite flavor being strawberry. On July 12, photos of mochi ice cream with the caption “My favorite” with six exclamation points, heart eye emoji, kiss emoji, tongue out emoji, five more exclamation points. And so on.

While Britney occasionally posts about other foods - notably sandwiches and avocados - Britney is the most captivated by sweets. Her sweet tooth is well documented; she is even synonymous with frappuccinos. If you google “britney spears sweet tooth”, you’ll see that in 2009, she spent $3,000 on candy in Las Vegas in fifteen minutes. Honestly, what better a place than Las Vegas, Nevada to show that money is both real and isn’t, that you can trade a sold-out concert for a heap of individually wrapped sugar.

It makes sense to me that what Britney Spears wants to fill her body with, what she wants to break apart with her teeth and let dissolve onto her tongue is sickeningly sweet, beautifully packaged things, meant to enjoy, enjoy, enjoy. Dessert, and more specifically candy, isn’t what we’re supposed to eat in order to take care of ourselves.

But a sugar craving will fill your throat like smoke. It’ll knock at the roof of your mouth until someone answers the door, until you find yourself handing over a dollar bill for a chocolate bar or swiping your card for a sweetened coffee or throwing a package of Oreos into the grocery cart or saying you know what, maybe I will take a look at the dessert menu. It’s not a should but a want; an I deserve it or a fuck it or happy birthday or I had a really shitty day. It might be the most honest parts of ourselves; the ones that want to fill ourselves with something sweeter. If I was sweeter, would I be kinder, more thoughtful, more considerate? If you are what you eat, then Britney’s the sweetest. And isn’t she?

When we were sixteen, my best friend Izzy wore Britney Spears perfume and she smelled like a cloud filled with secrets. The perfume clung to her hoodies and her hair, where its feminine sweetness juxtaposed against her more masculine clothes. On her, the perfume had a grit; its fruitiness shared a bed with the cigarettes she smoked after class, but if you hugged her, which I did often, you’d catch a whiff of it. Britney’s perfume is called Fantasy and that’s what Izzy smelled like to me.

Although I wasn’t in love with Izzy, I’ve come to love her in a way that transcends romantic love. I mean that I love her with a loyalty and a consistency unlike any other kind of love I’ve known. I’ve loved her for over half of my life now and back then, driving down the highways of San Antonio aimlessly, one lit cigarette dangling out the window from our underaged hands clad with dorky rings was a fantasy in itself. A friendship like that couldn’t be real, but it was, it is.  I doubt we ever said we’d be friends forever then; too corny, not our vibe, but that’s what it turned into. We didn’t realize then, how gay we were, as we blasted Tegan and Sara in her parent’s comically big green Suburban, ignoring texts from boys and turning the volume up on the music. We killed time looping around the very highways that eventually took us out of that suburban existence, away from a teenage ennui where I was reckless because I was bored or maybe I was bored so I was reckless. Smelling Fantasy next to me from the passenger seat, or staining my pillowcases with its white chocolate-musk scent the mornings after she slept over, which was nearly every weekend, was the closest that San Antonio ever felt to home.

When I think about Britney Spears ordering a strawberry ice cream cone or a caramel frappuccino after everything she has been through, part of me wilts at its sincerity, its grasping at something indisputably good, consistent, reliable. I watch Britney from the distance of my iPhone, where I see her now nearly every day, posting pictures of her censored ass and sweets and kids and recently, fiancé, and I want to see her live the American Dream, complete with an apple pie.

I don’t know what it’s like to be Britney Spears but once at nearly 2 am at karaoke at a gay bar, I drank too much tequila and sang Toxic and barely slurred out ‘baby, can’t you see’ before the bar sung it back, louder, drunker, with a joy and urgent electricity that’s specific to a dim room full of drunk queers: damp with sweat and hoarse from screaming. It wasn’t me they were yelling for; I was simply the conduit for the energy that the bar was craving that night and that was Britney. It was in the air, it was all around. For me, it’s always Britney.

I want a world where Britney gets her macchiatos and her ice cream and doesn’t ever post about losing weight, where Britney could eat all of the sugar in the world and twirl and strut and writhe and not worry about her audience. I want a home that smells like blissful domesticity and I want to be a woman who serves fresh dessert but I also want to be a woman who is confident enough to post a nude and not give a single fuck and not worry that anyone will think my legs are too short. I want to wear perfume with a top note of Fantasy, that conjures realities I don’t even know I want yet but also has a base layer of all of the highways I’ve driven down in the dark. I want to want like Britney, to live in a way that prioritizes the sweet in a way that doesn’t feel saccharine, want to be the kind of person to say let’s get dessert. Britney is a woman who has carried a snake on her shoulders in front of a live audience, belly button winking under the spotlight, who wants the simple pleasures in life, who has seen unparalleled levels of fame and who has looked tragedy in the eye and still finds time for cake. I want to be like Britney in that I want to be better, I want to be sweeter, I want dessert. Now.

Ariél M. Martinez is a queer femme writer from San Antonio, Texas. Her work has appeared in The Rumpus and Peach Mag and she has an MFA from Bennington College. She lives on the East Coast with her chihuahua, Frida. Find her on Twitter and IG @arielmtnz.