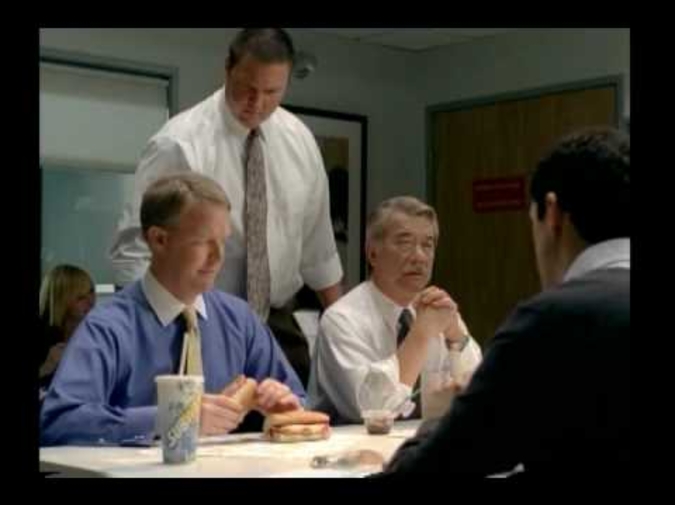 The first thing was, everybody’s voices changed. Not changed deeper, like puberty. This was changing back: they went high, squeaky, like we were seven years old again. This is right after we all started eating the sandwiches. This is when the shit went down.

Fitzgerald from HR was the first to go high. He came back from lunch waving six inches of a twelve inch Tuscan Chicken around: “free subs at the Subway in the lobby, suckers!” he shouted. Only it didn’t come out in his usual smoker’s rasp: it came out munchkin, like he was being overdubbed by a first grader.

We laughed, of course. Only the laugh wasn’t normal, either. The guffaws were replaced with tee-hees, the usual roar a shrill tinkle.

“Wait. What’s happening?” said Brown from Research. Her husky alto had turned soprano. She gasped, grabbed her neck. She whispered something to herself, then sprinted toward the ladies room.

We all started talking at once. It was the same for everybody: squeaky, high-pitched.

“What the fuck?” Sanders from Creative said. “This is fucking crazy. I have a fucking presentation this afternoon.”

He was right. It was crazy. And the rest of us were no better off. But the sound of his shrieky little voice shouting “fuck,” the look of it coming out his mouth – goateed, grizzled, a mouth out of which we had heard the phrases “user experience” and “new paradigm” and “value proposition” hundreds of times in thousands of meetings – it was too much.  We giggled and punched each other in the arm. We rolled on the floor, choked on our own high-pitched laughter. Benton from Programming pissed his pants, stood up and showed us all the dark stain, and we went even crazier.

We could feel our inhibitions lowering, even if we couldn’t find the word “inhibitions” any more.

“I feel silly!” Benner from Accounts shouted. He picked up a ream of paper and threw it in the air, waved his mouse around like a lasso.

“I am silly!” said Claypool from the VP’s office. She pulled her dress over her head and ran straight into the wall. She stayed on the floor and giggled.

First we went for the candy. There was a bowl on Selinger’s desk, but when we got there, she was sitting on the floor, surrounded by wrappers. She was Sharpeeing pictures of suns and clowns on the scuff-free carpeting.

We had all had those sandwiches for lunch.

The pretty girls were the first to figure out how to make it work. They teamed up in groups of two or three, roamed the office for candy or stray sandwiches, preyed on the nerds. They found Sanders chewing on a twelve inch Cold Cut Combo and watching Thomas the Tank Engine videos on his computer. “Hey Sanders,” they said. They grouped close together, touched each other on the wrist.  “What are you going to eat for lunch?” they asked.

He smiled. “Well…” he said, squeezing his Cold Cut. Thomas entered a tunnel and his screen went dark.

“We’re going to have lunch together,” the pretty girls said. They looked at each other, looked at Sanders, at his Cold Cut Combo. There was something happening but Sanders didn’t know what it was anymore. He adjusted his underwear. His face went red. He handed the sandwich over and turned back to the computer.  “Thomas is a useful engine,” he said.

They ate the sandwich right there, in front of him, in front of all of us, then marched toward Creative to find more stragglers.

Russell from Fulfillment found a spinny chair and we took turns racing one another across the floor, spinning and pushing, five or six of us at once: push spin giggle, push spin giggle.

Then we found the elevators. “So many buttons!” said Kenner from Web Development.

Bailey from Accounting jumped up and slapped the floor number. “And they light up!”

We rode up and down, up and down. Sometimes, people on other floors got on. We were suspicious of these new people. They looked like grown-ups, like teachers or principals, mommies or daddies. When they opened their mouths to shout “up up up!” or ask if we knew if there was any candy in the building, though, we knew that they had eaten the sandwiches, too.

Somebody said they remembered there was candy at the front desk of the insurance company on the 11th floor.  We found the insurance people in their break room. They had these giant sandwiches – long as a person, cut into little sections. That was the first time we realized how hungry we were for more sandwiches. An Italian BMT or Black Forest Ham or even a Veggie Deluxe. We were starving.

Our pretty girls talked to their nerds. “Hey,” they said, “we were going to have lunch together.” They looked at the big sandwich like it was a ring or a promise.  They touched each other’s wrists, smiled their smiles. We stood behind them, skittered and hopped from one foot to the other like we had to go to the bathroom. Those sandwiches were huge, and we were very, very hungry.

We backed toward the elevators. The insurance people weren’t nice. They should get in trouble, we thought, but there weren’t any teachers or principals or mommies or daddies to tell. We wanted those sandwiches. It wasn’t fair.

Felker from Security was kind of loitering around near the back. He had either been an Eagle Scout or a criminal. We were never sure which, and it changed, depending on who you talked to. He walked up, casual-like, took a pen out of his pocket, and jammed it in the throat of the first insurance nerd he came across. The guy screamed. Blood poured onto his white shirt. We giggled. Felker hopped up and down. He high-fived the pretty girls, punched the next insurance guy in the face, then walked around the rest of the conference room, tipping over chairs. We grabbed sandwiches and stuffed them in our mouths, put them in our pockets. The pretty girls took the person-long trays and we ran for the elevators.

In the elevator, we ate all the sandwiches. We hit all the buttons. Royce from Advertising peed in the corner and we giggled.

“Hey,” one of the pretty girls said. “I know where there’s candy. It’s in the mall down the street. Candy. Sandwiches. Lots of nerds.”

We checked the pens in our pockets. “Let’s go,” Felker said. The elevator opened and we got off.