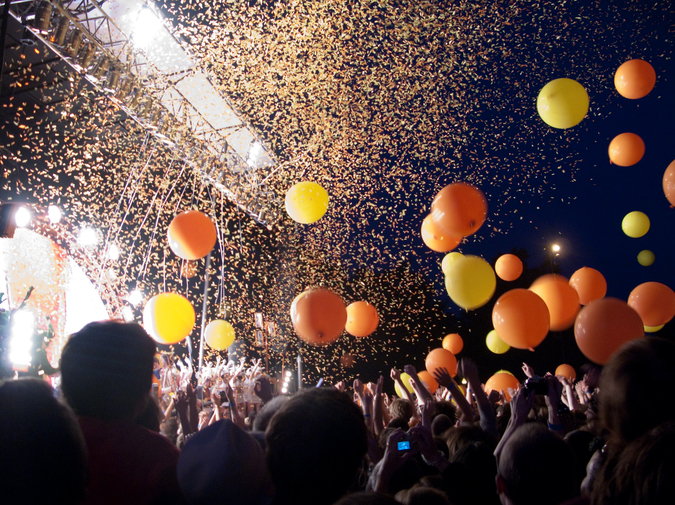 Will’s buddy Kyle kept driving past the venue, under the interstate, down a side street where the girl knew she’d never be able to find her way back alone. From the rear passenger seat of the Neon, she offered to pay to park closer, somewhere back downtown, but Kyle laughed away her twenty, which Will swatted over his shoulder, insisting instead she buy the first round.

The girl tucked the bill into her wallet, feeling a certain heat from the third guy in the car. While buckling, she’d grazed Matt’s thigh; it was firm, unyielding. Every time he spoke, he said something condescending, but he had these wild eyebrows she imagined plucking in the morning light of the house he shared with Will. When Matt grinned at her from across the backseat, she forgot about parking, could barely remember the city to which she’d driven seven hours, guided by scribbled Mapquest directions, upon an invitation from Will, who she’d friend-zoned last summer after a misguided hookup fueled by Jell-O shots. As the idea of hanging out as pals no longer seemed awkward, she’d streamed a few 30-second mp3 samples before replying I’m so there, oops it’s sold out, wait what do I owe you, are you sure, that’s so sweet of you. He said he couldn’t believe she’d drive that far to see him, after everything. She said sophomore year hadn’t been quite what she’d hoped. For months, she’d thought about transferring, which proved easier than printing the forms and mailing them in.

Every block radiated underfoot with late-afternoon heat, aside from the respite of the underpass. The three white boys walked single-file, their black t-shirts’ backs boasting dates of tours already seen—at ACL, South By, somewhere up in Denton—paired with ratty Chucks or skate shoes that had never touched a board, their denim worn tight. By the time they reached the line’s end, along the fence, the girl's inner thighs burned, her underwear soaked beneath her skirt, vintage polyester, not meant to breathe like jeans. Had she packed another pair? Her duffel had been light as she’d tossed it on Will’s mattress, which he’d offered to her, insisting he’d take the floor. He said it would only be weird if one of them made it that way.

As they waited, marinating in June sweat that refused to evaporate, Will talked to Matt and Kyle exclusively. The girl didn’t have much to say anyway about loop pedals or Waterloo in-stores or something called a polyphonic spree. She felt her makeup—her best efforts at primping in a bathroom without any towels in it, shared by two dudes fretting about missing an opener—sliding from where it belonged.

Unfortunately, going inside didn’t mean air conditioning, as she’d expected, but a giant backyard filled with trees, wood benches, and pit smoke. She handed her twenty to Kyle, the only one given a wristband, to order beers two at a time from different bartenders. A hassle, sure, but worth it for that first sip from a plastic cup made more sophisticated by its orange-slice garnish.

The cup’s condensation slid down her arm, dripping from her elbow into the dirt. Having eaten nothing since a breakfast Pop-Tart, she could feel her face soften with each cold gulp. She’d already forgotten what band they were there to see.

Turns out they’d missed the first opener, an act Matt described as up and coming, which might have made her sweat harder were he not so distraught, even threatening to leave, like the worst brats she babysat for. Sorry, she said, though she’d taken mere minutes getting ready. It wasn’t her who’d miscalculated traffic, but Kyle and Will had ventured off to find sloppy barbecue the girl couldn’t imagine eating in front of anyone.

Great, Matt whined, now we have to sit through this has-been. Onstage, a woman tuned a guitar over a hum of chatter that continued unabated. She had about ten years on everyone in the crowd. The girl asked who it was.

Don’t worry, Matt said. She’s been off the grid for ages—getting her tits done, apparently. Stepping closer, he said, So what’s your story? Her story was over by the first song, serving only as a steppingstone for his. She let him talk at her for the rest of the set as she licked foam from her cup. He studied film, but don’t worry, he said, he knew about music, too. She wasn’t worried. He said something about a soft bulletin. She made no effort to conceal a yawn.

Will reappeared with two bottles, limes lodged in their necks. Want this one? Kyle only ever has one because he used to be straightedge.

Nice, you roped an oldster into DD’ing so we could get wasted. She lunged for the glass.

Isn’t he the one who’s divorced?

Yeah, and after hearing him talk about his psycho ex hosebeast, I’m never getting married.

The speakers stopped playing a song she actually recognized, as the band everyone else was there to see took the stage. The music sounded different from the samples, more theatrical but weirder and sadder, and she gazed at the crowd, feeling weird and sad, smelling her own body, or maybe the man in front of her, her nose nearly grazing his elbow, making it impossible to see anything but laser light refractions in the hovering smoke clouds. She studied Will’s face as he swayed with folded arms, eyes closed, even as the singer donned Hulk hands, while literal confetti rained down in mandatory joy, like something from grade school, something outside herself she couldn’t understand. Perhaps she wasn’t drunk enough. She hadn’t smuggled in her one-hitter; next time, she vowed. She tongued the lime’s pulpy strands until, finally, it fell, then squeezed Will’s arm and wriggled from the humid mass of bodies in search of the ladies’ room, where she threw her underwear away.