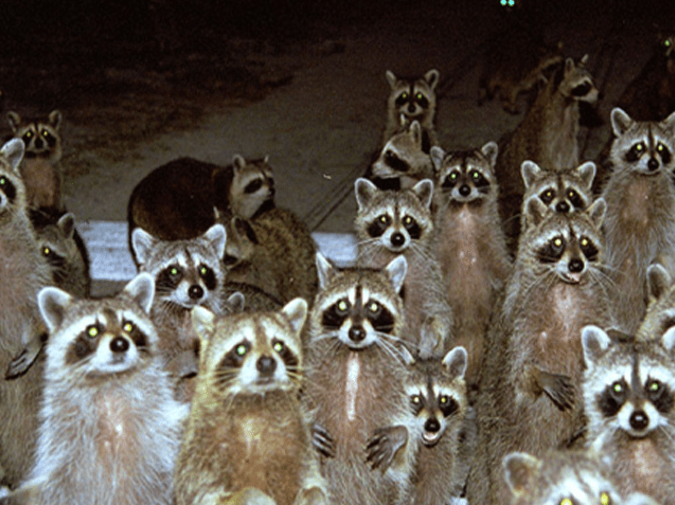 I left the kitchen door unlocked by mistake, and I suppose that’s how the raccoon came in. It was odd—I never heard the door open (and you would think a raccoon opening a door would make a sound), but suddenly, there it was, sitting in the chair by the window, surveying the room blankly. “Can I get you a drink?” I asked.

The raccoon seemed to nod, and its little whiskers twitched.

“Do you like highballs?” I asked, but I was already pouring bourbon into a second glass and looking around for the open bottle of ginger ale.

When I set the cocktail down in front of the raccoon, it reached out with its tiny hands and tried to lift it, but the glass was too heavy. Instead, the creature leaned forward, dipping its nose into the tall glass and slurping loudly. I wanted to ask whether raccoon tongues are like dog tongues, especially evolved to lap up liquids from bowls, but I got the sense that this would be rude, that the raccoon had not come to make small talk about evolution.

I waited for the raccoon to finish the drink, and then I poured it another. “Listen,” I said, but I changed my mind midstream, worried that I would say the wrong thing. Instead, I walked over and turned the radio on. It was the kind of new age ambient music program that public radio stations play late on Thursday nights. We listened to what could have been ocean sounds for what felt like ten minutes before the beach faded away, and a sultry voice announced that it was, in fact, ocean sounds from an album of field recordings by a composer I had never heard of. I turned it off.

“Listen,” I said again, hoping that this time I had something better to offer. “I think I know why you’re here.”

I did not know why the raccoon was there. I didn’t really know why I was there. Why is anyone in their kitchen drinking highballs on a Thursday night? I waited for the raccoon to reply.

The raccoon said nothing, but it held out its tiny hands, and for a moment, it looked like a child, begging to be picked up. I took a step towards it, but it hissed and then let out a low growl, standing up on the chair and stretching its body to be larger.

I took a step back, wondering whether serving the raccoon two highballs had been a poor choice. I decided to offer it some peanut butter-filled pretzels to soak up the bourbon. I poured them into an ornate bowl, decorated with climbing roses and chipped on the rim. The raccoon stayed quiet as I set the bowl on the table and pushed it forward. It took nearly a minute before the creature picked up a pretzel in its tiny hand, turning it around, feeling the imbedded salt. It hesitated, mouth open, then rubbed the pretzel against its armpit, a perfectly sized and well-salted loofah, high in protein.

The raccoon wanted something. It had to. Otherwise, why me, up here in this third-story apartment? If it was the same raccoon (and you could never be sure), then it had been rummaging through the dumpster a few nights earlier. Had it discovered something in my garbage that warranted a home visit? I strained to remember the contents of my bag—bills? A letter or two? Old takeout containers? Nothing that would necessitate a visit from this ominous raccoon.

But perhaps it was something deeper, not a problem easily discovered in a week’s garbage, but something more essentially incorrect in my life. Raccoons spent their lives eating up the things that no one else wanted, and perhaps my time had come. Perhaps this was the fate of every unwanted thing, in the end, to be picked apart on the scuffed linoleum by a drunken scavenger.

I felt cold, but before I could say anything, the raccoon reached into its hairy folds and pulled out a small, shiny object. When it set it down on the table and pushed it towards me, I could see quite clearly that it was a nickel. With its bill settled, the animal slid off chair and padded towards the back door. As it reached up for the knob, it turned around and gave me one slow wink, its other eye fluttering slightly, an effect of the whiskey.

Alexander Evans is a writing teacheer by day, and at night, he writes flash fiction. His stories have been nominated for the Pushcart Prize and been featured in magazines such as Pithead Chapel, X-R-A-Y, and Milk Candy Review. He spends much of his time hanging out with his rescue pup, Otis, and trying to remember where he set down his now-cold cup of tea.