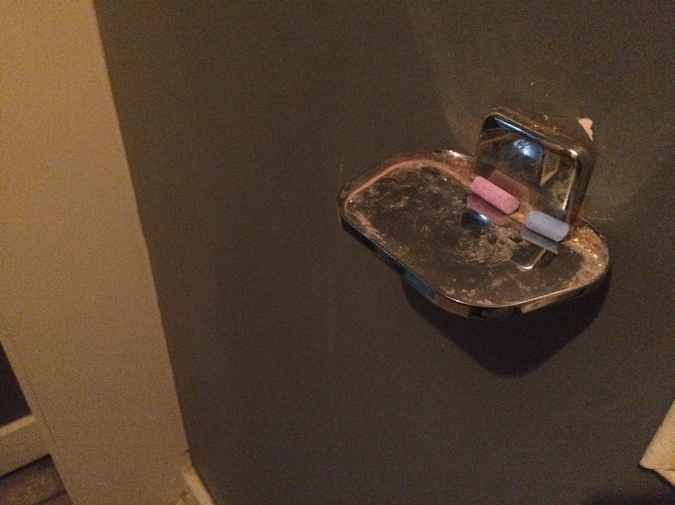 I was staying with Nicole during the semester of the break-ins because my assigned roommate in the dorms, a business major who everyone called Maverick, wouldn't stop calling me a faggot. I wasn’t out to anyone except Nicole but he took one look at me and decided what I was. He said it under his breath every time I walked into the room. He said it before telling me to mute the volume on my computer games or turn off the light so he could take a nap. "He acts more like a girl than some of those bitches in Kappa Kappa," is one of the many things he said about me on the phone with his friends. And he ripped down my Lady Gaga poster only a week after I hung it up—the one that said LITTLE MONSTERS!—even though it was clearly on my side of the room. "I'll tell you who's the monster," he said with his eyes, like he could see right through me.

I met Nicole freshman year when we both worked as student employees at the Payroll office on campus. She stuffed the envelopes and I operated the postage meter. She shared some of her weed with me on our break and I told her about my high school boyfriend who I had never actually met in person. He existed for me as a Night Elf avatar in World of Warcraft. We were even married in the game, our avatars pressing their faces against each other at a big party at the Scarlet Raven Tavern attended by a bunch of other elves all clapping their delicate hands together, and our sexual relations—which were frequent and adventurous—always began with someone typing /emote. "We'll have to do something about that," said Nicole, pulling in a long hit from a pipe.

Now she worked at a sports bar near campus and I told her about Maverick over a happy hour beer she served me for free, even though I was still underage. “And I can’t report him,” I said. “He would probably kill me.”

“If you’re asking me if you can sleep on my futon for the rest of the semester, the answer is yes,” she said. “You just can’t interrupt me when I’m doing my yoga videos, and please only jerk off behind a closed door. But you can steal whatever you want,” she joked, referring to the break-ins, the guy showing up in people’s homes wearing a ski mask, little holes for the eyes. One girl said he punched her in the face when she woke up from a nap and realized she wasn’t alone. Someone else said he threatened her with her own knife. He was only after girls, it seemed. Easy targets.

One night Nicole came home early from her shift while I was in the living room re-watching a favorite scene from The Vampire Diaries—a shirtless vampire fighting a werewolf while trying to keep out of the sunlight, both of them sweaty and angry. I hastily covered my lap with a pillow when I heard her come in. She had trouble with the door at first and something crunched in the lock, like her key had gotten stuck. Maybe she was drunk.

"Slow night?" I asked, tossing my voice behind me as I heard her come in. The front door was around the corner in the kitchen. I heard her rummaging in the change jar by the door, maybe digging for one of the twenties she kept in there for emergencies. But she didn't say anything at first. Maybe she hadn't expected me to be home. I was wearing her pink robe, the silk one she brought back with her last year from a trip to Japan. It was like a secret identity, like playing a part I had written for myself. Or like the opposite of a secret: something out in the open. And I never wore a shirt with the robe because it felt more glamorous that way, like I was a woman in an old movie being woken up by a mysterious caller at the door.

The robe hung lightly over my bare back as I stood up and stretched. "How was the bar tonight?” I asked Nicole. “Please tell me someone ripped off his shirt during a bar fight. I want to hear something good."

The robe swung loose at my sides as I turned around and looked into the kitchen. I had drank a bottle of wine while watching TV and I squinted now into the shadowed hallway, the kitchen still dark, everything slightly off kilter. He stepped slowly into the light and I hated the way my voice changed when I said, "You're not Nicole," something obvious, something that by now didn't need to be acknowledged. A deeper voice than the one I used with Nicole; a man’s voice. Then I realized I had thrown off the robe without even thinking about it. I had taken off the robe instead of running away. Now I stood there in front of him half-naked, skinny and small, exposed. He could see all of me.

"Look at you," he said. And he raised the baseball bat like he was conducting traffic. He had seen the pink robe. He was probably smiling behind his mask.

Richard Scott Larson holds an MFA from New York University. His fiction has appeared in failbetter, Joyland, Booth, Eclectica, Pindeldyboz, and other venues. He also contributes criticism to a variety of publications. Born and raised in St. Louis, he now lives in Brooklyn and works for the Expository Writing Program at NYU.