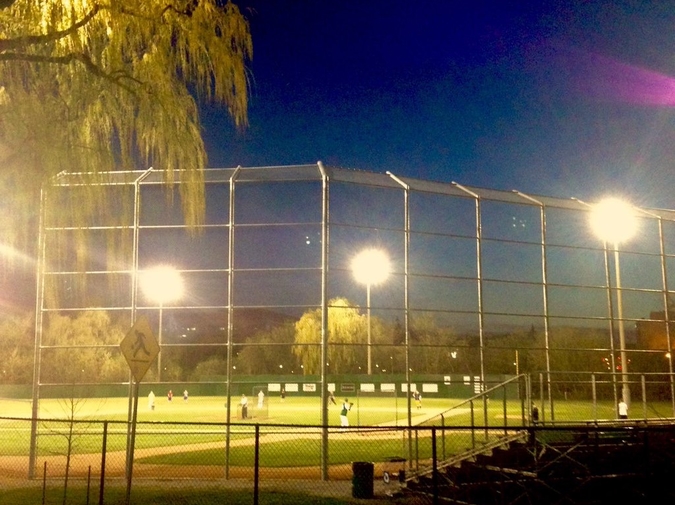 These were not the Joe Carter World Series winning years. These were not the José Bautista bat-flipping, punch-taking days either. These were the lean years. The years of Delgado breaking Blue Jay records in a losing season: 25 games back. These were the years Vernon Wells promised to save the franchise, next year, next year, max contract, next year. I had the 1992 pennant hanging in my room. I had no memory of their win. Just stories my parents told me of how I would sing “Ok Bu Jay… ets pay ba” in my toddler voice. The baseball my dad and I threw around was a mangled overhit relic of those years, the salad days, when the title came north across the border and the team that discovered Jackie Robinson, the Expos, still existed.

My parents played every other week in a slow-pitch league. My Dad was a pitcher. My Mom played shortstop or third base. She said those were the positions she liked because you didn’t have time to think. I wanted the outfield because all I did was dream. I inherited my Dad’s eye for the plate and my Mom’s singular ability to hit only groundballs. Defence was my game while the game lasted. The Classics, my parents’ team, was forever in second place. The victors every year were The Plague. They were barrel chested, they were drunk, they were titans, hitting pitch after pitch back to the fences were the Classics hid their weaker players. They were our local Yankees, hated vilified and rarely bested. While my parents played I would watch from the sideline. Being an only child, my practice ritual consisted of throwing a fly ball up in the air and catching it. Each time it was 3 on, 2 out, bottom of the ninth, countless clinching catches were mine to be had. Every night after these games my Mom would say, “We should go to a real game” and my father would reply, “Tickets are cheap enough.”

In 2001, the Skydome looked like the Colosseum after the Hun’s were done with her. We had seats right by right field. They cost 10 dollars apiece. We drove the two hours into Toronto in the morning, to avoid rush-hour traffic, my Dad said, but secretly I think he wanted to watch the team warm up just as much as I did. Once the Skydome opened its doors, it seemed as if the venue was ours alone. We each got a thick booklet from one of the vendors but no food or drink—­that was a line in the sand according to Dad. When we were settled in our seats, the field was empty. I flipped through the booklet my Mom had bought and to my horror it was numbers, equations, percentage points, decimals. I could barely do my times tables! The numbers were quickly constructing a wall, fencing me off from my parents’ sport. “Put that down,” my Mom said, “they’re taking the field.” As the Blue Jays came onto the astro turf I searched out Carlos Delgado. Home run king, All-Star, silver lining. He was getting his lumber warm. I stared at his form. How he stepped into his swing. Pitch after pitch pumicing the netting. Behind us, a group of guys in their late teens and early twenties were watching another player, unknown to me at the time, throw in right field. Raúl Mondesi. They chanted and cheered his name so loudly that I stopped watching Delgado and focused my attention on the right fielder, clad in wraparound sunglasses, a bouncing chain necklace and a cacophony of armbands.

I cannot remember who we played.

I cannot remember who won.

I did not fill out my score card.

I do remember Mondesi and his fan club behind us. I do remember the realization that I was watching a five tool player. I do remember his throw from right field to first catching a straying baserunner out. I do remember his glasses falling from his hat as he dove to catch a fly ball. I do remember the men behind me screaming for that ball. “Raúl you rule, Raúl you rule. Over here, up here!” He was more than just defence. Mondesi hit a double his first at bat. When the Blue Jays left him stranded I could feel the sigh of frustration behind me fill the almost empty stadium. I was excited, I knew I would get to see Raul in action up close. I was in it for the defence.

After the 7th inning stretch, Raul came out and was greeted by his right field chorus with “Mondesi, Mondesi, Mondesi for MVP!” Then one of the men broke off from the chant: “We love you!” and I swear the entire stadium was quite; the fan sheepishly added “Like a brother.” His delicate masculinity flailing beneath the open dome. My parents laughed and laughed. And I joined them, not knowing why this was hysterical, coming to the edge of understanding but not being able to immerse myself in the knowledge. Like watching them play in their league from the sidelines, toeing the chalk and imagining my Dad’s voice asking, “You ready to get out there.”

The Blue Jays would trade Mondesi to New York.

The Blue Jays would trade Delgado and Wells.

The Blue Jays would lose a lot of games.

The Blue Jays would find their way back into contention, with an aging Bautista and Encarnacion, with the Bringer of Rain, with midseason trades and late inning heroics.

Raúl Mondesi would be traded to the evil Yankees.

Raúl Mondesi would mostly be remembered as a Dodger.

Raúl Mondesi would represent San Cristóbal as a member of the Dominican Liberation Party.

Raúl Mondesi would become mayor of his hometown.

Raúl Mondesi will forever be my Blue Jay, the first taste, the flickering memory, my toes testing the chalk—waiting, waiting, almost ready to be called.

Dylan Taylor is a Dad who sneaks off in the small hours to write. Dylan is a writer who spends his afternoons as a dinosaur. He has work published in decomP, Entropy Magazine, The Airgonaut, Maudlin House, Literary Orphans & WhiskeyPaper. His book 101 Adages for the Millennial is available through Maudlin House. Find him on twitter @MacTaylor89