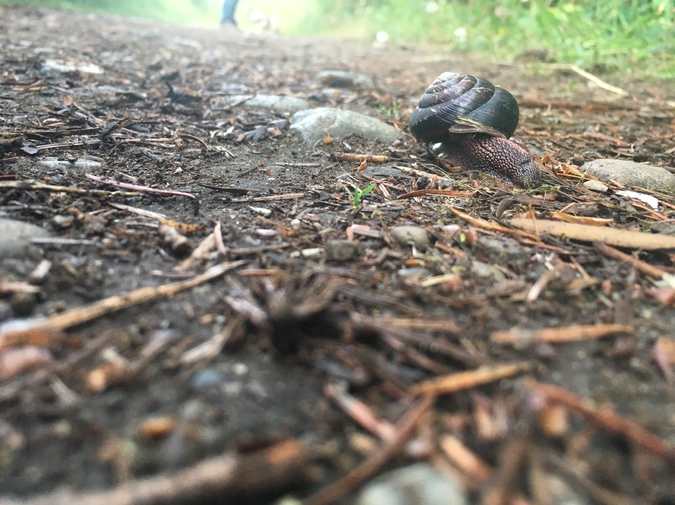 Something is pretending to be dead in this story, but I don’t know where. If I keep re-creating it, will the possum open its eyes, or will it turn back into a coonskin cap? Maybe it was never a possum at all; maybe it was always just a cap. Maybe I always knew that. My memoirist-fear is the truth: that every time I access a memory, I alter it from the original experience. I’ve manhandled this one for twenty-five years.

The possum story should never begin with the possum. It shouldn’t even be called The Possum Story because the title gives away the punchline. “Let me tell you about the time” is the only entry into retelling, an indulgent reconstruction couched in request—let me.

Let me tell you about the time I climbed a bush in my backyard. It was more like a tree, so tall it nearly touched the power lines.

I only know it nearly touched the power lines because I dug in my parents’ photo box for pictures of our old backyard. I wanted to be accurate. I originally wrote that the bush was fifty-feet tall because it sounded dramatic, but Google said the minimum requirement for power lines is just ten feet. The power line in my photo only leads partway up our one-story roof. Counting our eight-foot ceilings, plus another six feet for good measure, only makes the power line fourteen feet high—embarrassingly short, but that’s par for the course when reframing childhood.

So, a fourteen-foot-tall bush then. My brother and I used to push away the outer branches to climb the framework of inner branches, hiding deep within. But I was alone in the bush when I noticed my brother’s coonskin cap lying in the dirt. I climbed down and picked it up, but when I turned the cap over, I saw the beady eyes of a possum. I dropped the corpse and ran into the house screaming.

I told this story as a party trick for years. Later, I added the detail that the possum was probably only pretending to be dead, because my desire to appear fearless is always alive and well.

But how could I have mistaken a possum’s mottled body for a striped coonskin cap? How could I have scooped the heavy weight of a possum without realizing I wasn’t lifting a thin fur scrim? How could I have ignored the arms, the legs, the claws, the gruesome tail? I was not a child comfortable with creatures—I never even poked a pillbug to watch it curl into a ball. I could not have accidentally picked up the possum.

So why can I see the possum’s eyes in the back of my head? I have insisted on this plot for decades, but then again, of course I have—I had lifted something that was dead. As a writer, all I do is pick up memories, hoping I can make them alive again.

I carried the steel-trap memory in our house. I learned that the credibility of a single detail could pry open a hidden layer in the stories I’d snare from my family, so I racked facts like portkeys until I could access the parts that were missing.

Now, I ask my daughters to retell the story, and they add, “You were so excited because the hat had been missing.” There is a part I thought was dead: I was going to please my brother. Yet I also told a version where I’d planned to make him think it was a corpse. Maybe I have been trying to remember a time when my brother and I still sought a reaction from each other.

Once, my brother cornered me with a rock as big as a fist. I knew he would throw it at my head and I would bleed out and die. But he was two years younger, and a rock that size would have taken two hands to lob. I would have been able to dodge.

So I didn’t die. Maybe he never even threw the rock. But why I can still feel my animal fear as I froze, staring at what he held in his hands?

I tell my brother that I don’t know, anymore, if I really picked up the possum. He says, “You’re better at remembering things than I am,” which is the trouble. There was no one in the bush but me and the possum. Or the coonskin cap. Something dead; someone pretending.

Kristine Langley Mahler is a memoirist experimenting with the truth on the
suburban prairie outside Omaha, Nebraska. Her work received the Rafael
Torch Award from Crab Orchard Review, won the 2019 Sundog Lit
Collaboration Contest (with Jennifer Wortman), was named Notable in Best
American Essays 2019, and has been recently published in DIAGRAM, Ninth
Letter, The Normal School, Waxwing, and The Rumpus, among others. She is
the Publisher/Editor-in-Chief at Split/Lip Press. Find more about her
projects at kristinelangleymahler.com or @suburbanprairie.