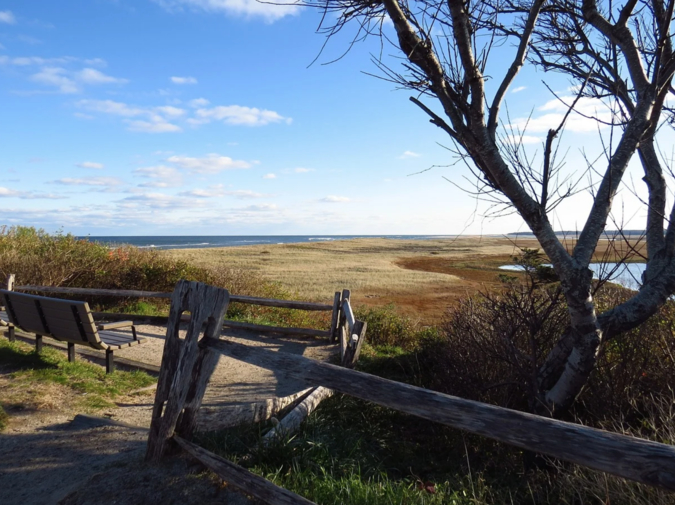 Holly had a list of endangered plants. Climbing fumitory, downy agrimony, putty-root. Of the 3,500 plants in New England, 770 of them were threatened or possibly extinct. She spent time after school and on weekends looking for them. Sometimes she’d sit cross-legged in front of peoples’ lawns, and imagine what plants used to be there. Purple cudweed, foxtail clubmoss, spurred gentian. Then she’d picture the insects that lived on their leaves, early hairstreaks, tule bluets, coppery emeralds. Then the birds and animals that ate the insects would circle overhead, eastern meadowlarks, golden-winged warblers.

Occasionally a homeowner would come out and scowl at her until she’d slowly gather up her things and go, but more often than not, people left her alone.

Holly had a dilapidated wildflower field guide. She’d found it in her parent’s basement, which was strange, because they only had religious books: Questions About the Afterlife, Angels of the Old Testament, Listening to the Lord. She carried the field guide in the woods. Finding certain flowers was like witnessing magic. Their appearance was contingent on specific conditions: season, surrounding vegetation, whether the forest had a duff layer.

Holly unpacked her sandwich and breathed in cedar swamp. There was a lot of sedge on her list, creeping sedge, handsome sedge, livid sedge. She looked at her notebook again. It was on account of all the wetlands being filled for strip malls.

Holly wondered about the social lives of plants. If they were loners, or if they knew when their family and friends had been decimated.  Kauri trees kept stumps alive by sharing water. Their family and friends. Plants existed in realms beyond human language. She wondered if she’d ever get to experience being something other than human, like a muskflower or red mulberry.

A strider pumped across the surface of the pond. Some silvery minnows swam nearby.

Holly returned to her pursuit, with her lists of sedge and clubmoss, when her thoughts got messy. There was too much to focus on: algebra, history lessons, vocabulary words, an unending ballet of attention and memory, the confusing realm of human interaction. Her parents were obsessed with the afterlife or the past, and no one was even around for most of that. She felt like the outermost ripple of a rock dropped in a lake. Either way the world was getting closer to the eschaton, which was probably the perimeter of a pond.

Dead leaves crunched underfoot as Holly trudged uphill. She was lovelorn. Her object of affection was a kid from a nice neighborhood. She couldn’t talk to him because she was afraid he’d find out where she lived. It shouldn’t have mattered, but it did to some people. To comfort herself, she pretended she was the symbiotic relationship between a lady slipper seed and fungus. There was balance.

Maybe rather than go to school, she’d live in the cave on the hill. She’d make friends with beavers and porcupines, and other weird looking holdovers from the last mass extinction.

It was only a matter of time.

When Holly wasn’t staring at her neighbors’ lawns, or searching for near-dead species between boulders and backwoods conservation areas, she watched excavators displace birds. Construction trucks dug into the earth, uprooting trees, disrupting beetles and chipmunk burrows.    She imagined being a duck returning to a department store rather than a wetland, flying thousands of miles for the ultimate disappointment. They don’t advertise that in the brochure, she thought.

Locating doomed shrubs eased her melancholy. People thought she was dumb. She finished her worksheets fine, she just found her mind wandering into the pace of creeping vines, the subtle sound of roots pushing through earth. Rather than think about the afterlife, she thought about the beforelife, which was probably pretty strange, whatever it was.

Down the path, between pine trees and rhododendron bushes, some evangelicals were baptizing a kid in the lake. The preacher plunged a boy into the water, and he emerged covered in leeches. Everyone started shrieking. Holly watched a couple of the evangelicals run through a strip of poison ivy as they made their way back to their cars, their hands desperately clasping at their backs.

Holly recognized some of the last evangelicals to leave the water, including three sisters from Bible camp and a man who walked around town talking to himself. She kind of hoped her crush would be in there somewhere, even though she kind of didn’t. It would be a shame if his parents had messed up his brain like hers was, fighting to see beyond the lens of her parent’s worldview.  He seemed stigma-free, which was one reason why she liked him. Her parents had stopped forcing her to go to church a year ago. They knew she was wandering around the woods, and probably hoped she’d come out a mystic.

Society didn’t accommodate mystics. Anyone who sat under a tree for a prolonged period of time, without the sanction of a saintly order, was considered a bum. Jesus would have been a bum. Plants were bums. The world changed. Pogonias and hyssop went extinct at the hands of human recklessness. She was trying not to get crushed underfoot, uprooted. She dug her heels into the ground, as if her veins were mycelium stretching down into the forest floor. Maybe that was her destiny. Maybe she was a mystic. Maybe she was a bum.

Gabrielle Griffis is a multi-media artist, writer, and musician. Her fiction has been published in SplitLip, Wigleaf, Okay Donkey, Monkeybicycle, Gone Lawn, XRAY, and elsewhere. She works as a librarian on Cape Cod. To learn more visit gabriellegriffis.com or follow her on Twitter at @ggriffiss.