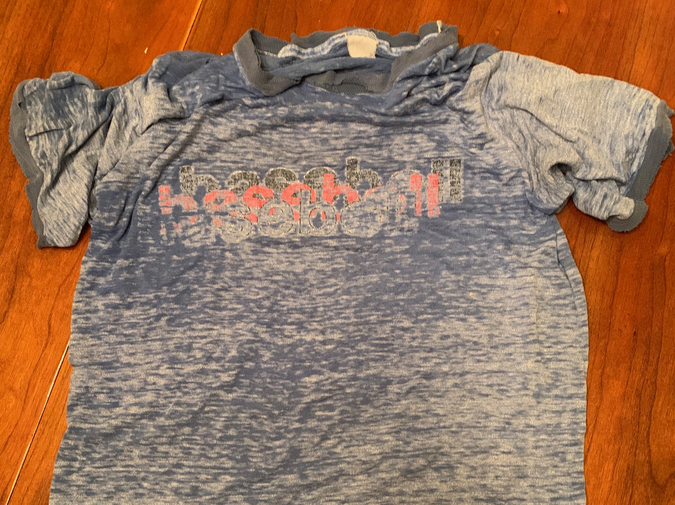 I’m not the kind of fan to wear a jersey or a cap to the game. Never have been. I wear street clothes and dress for the weather for the most part. You can’t tell a true fan from their outfit choices anyway. You know a true fan by how they talk about the team. Do they hold informed opinions? Propose reasonable trades? Know who the vulnerable guy is on the 40-man roster? My father and I are of the mindset that fans who have the latest jerseys are too susceptible to trends and if you wear the jersey of a player no longer on the club, you aren’t a serious fan. Fans who wear gear repping teams who aren’t even playing that day are out of touch.  But I had this one shirt.

I’ve been going to ballgames since I was a young kid, and when I was a tween I discovered this old t-shirt of my dad’s. He had long ago moved out, but some of his stuff still hung around the house. The shirt was from the late ‘70s or early ‘80s, light blue with darker blue bands lining the short sleeves and neck. No tag. The shirt merely said “Baseball” three times—the text overlapping in different colors: once in red, then white, and blue. It also featured three baseballs in place of the second “a” in the word, descending at an angle. I liked that it didn’t say “Chicago Cubs”—our favorite team—that it was understated. After all, we loved the sport above everything. We were the most highbrow consumers of the game. I could justify wearing this shirt.

When I got my hands on it, it was already worn thin, after years of my dad’s use while doing weekend chores—weeding, lawn mowing, or thrown on as an extra layer while shoveling snow. I don’t remember him wearing it—but I have one photograph of him in it, holding me as a baby. I found the shirt in winter and started slipping it on under sweats. Then, our 2003 season ticket share arrived. The Cubs started winning. I began wearing the shirt to games, under or over my seasonally appropriate clothing. The shirt made it to 2004, but as the Cubs began to falter and ultimately fail to repeat their success, my dad chided me that my luck had run out. He told me maybe I should leave the shirt at home. And then the shirt began to disappear. I could see through the fabric, and when I took it off it and threw it on my chair was no bigger than a bundle of socks wadded up.

As Jerry Seinfeld says of “Goldenboy,” his favorite six-year old t-shirt, my baseball shirt was “slowly dying.” Jerry goes on to soliloquize, “The reason he’s the iron man is because he goes out there and he plays every game. Wash! Spin! Rinse! Spin! You take that away from him, you break his spirit!” I decided I’d rather break my shirt’s spirit than see it die. I removed it from the rotation just before it started popping holes. I haven’t worn the shirt in over 15 years, but I keep it in my bottom dresser drawer, with the fancy accessories and expensive purses I now eschew in favor of carrying plain canvas bags. It sits right under a vintage Chanel silk scarf I found at an antique store, one I bought because it made me feel a little bit like Grace Kelly. The baseball shirt is just as smooth.

Sandra Marchetti is the author of Confluence, a full-length collection of poetry from Sundress Publications (2015). She is also the author of four chapbooks of poetry and lyric essays. Sandra’s baseball poetry appears widely in Poet Lore, Blackbird, The McNeese Review, Southwest Review, FanGraphs’ The Hardball Times, and elsewhere. Her prose on the game can be found at Barrelhouse, Entropy, and Pleiades. She is currently shopping a book of poems about the Chicago Cubs, listening to baseball on the radio, and going to games with Dad. Sandy earned an MFA in Creative Writing—Poetry from George Mason University and now serves as the Coordinator of Tutoring Services at the College of DuPage in the Chicagoland area. This is her fifth annual appearance in Hobart’s baseball issue.