Meet Me at Prince Street, NYC 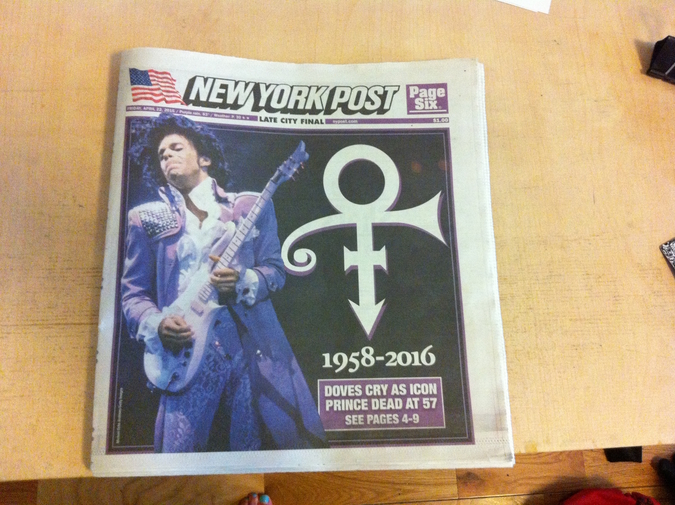 If you didn’t learn how to have sex with Prince playing, you might still not know how. Everything about Prince was, “Wait, you can do that?!” It’s not that he was (just) a genius musician, it’s that he was doing something that no one else had done, and may never do again. He wasn’t just slaying the guitar. He wasn’t just wailing falsetto. He wasn’t just dancing in ways we’ve never seen. He was giving us a new version of humanness. There are so many performances worth watching. At The Rock and Roll Hall of Fame in 2004 when he plays on the Beatles’ “While My Guitar Gently Weeps,” it is just insane. When he plays with Lenny Kravitz on “American Woman,” they conjure Jimi Hendrix in the most metrosexual showing imaginable. The 2008 Cochella cover of Radiohead’s “Creep.” The 2007 Super Bowl performance of “Purple Rain” in an absolute downpour (with that phallic as hell guitar). The entire 1982 show at Capitol Theatre.

I graduated from high school in 1999: that’s when I really started listening obsessively. I remember when I first heard the entirety of Purple Rain on vinyl, in the basement of a friend’s house. It was better than pornography. It made me laugh and nod and shoot my eyebrows, and blush. I bought all of his albums and played nothing else. I’m 5’9”, which means 7 inches taller than Prince stood. And yet, on stage, he always looked larger than life. Like he could make you do anything he wanted with just a glance. Even though Purple Rain changed the way I thought about sex, and power, and femininity, and life, there are so many incredible albums. So many weird, weird songs. When I was working on Flashes of Life, which is largely a tribute to all of the music that has influenced my life, I couldn’t figure out how to write about Prince. I probably tried a dozen approaches, but nothing did him justice. Finally, I decided to write 99 words to Prince—try to make Prince feel the way he made me feel. The way Prince makes us all feel. Sexy and crazy and queer and perfect.

Flashes of Life (Hobart Handbooks) is Micah Ling's most recent collection of poetry. She teaches in the English department at Fordham University in Manhattan, and is also a dog-walker. micahling.com