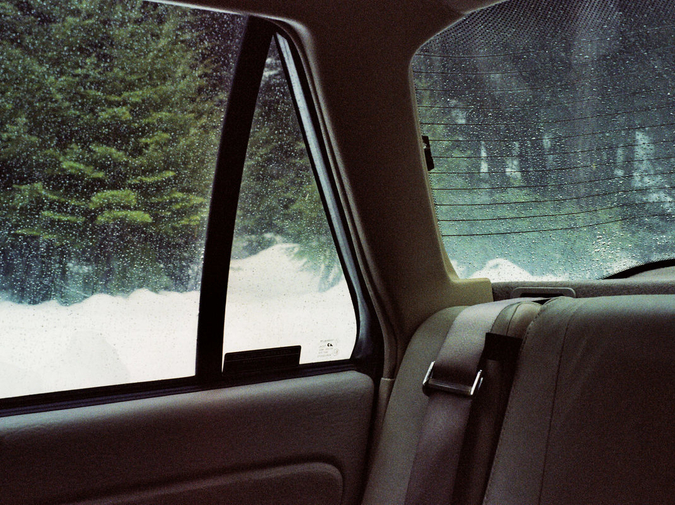 You told Mrs. Miller you had to make up a clarinet lesson so you needed to leave class early and she believed you, the old bat, even though you’d quit the clarinet three years earlier. I picked you up behind the gymnasium and handed you a lit cigarette before you even closed the car door. You flipped through the folder of CDs I kept tucked next to the seat for you until you found what you wanted: Bikini Kill or Ani DiFranco or Liz Phair or someone like that, all those angry women singing on your behalf.

It was nearly Thanksgiving, the days shorter and shorter already. We drove through the winding rural streets out of town, roads with numbers instead of names, and then through the next town and the next one and finally onto the highway, passing exits for towns even smaller than ours.

We didn’t talk. Not about your dad or the shit in the newspaper. Not about how empty I felt not walking those hallways anymore. I couldn’t wait to get out of school, leave all that crap behind, but as soon as it was over it was all I could think about. Everybody always talked about how great things would be after high school, the future is so great and shit like that, but there wasn’t anything great about working construction. I spent all day driving the roller back and forth over the same patch of dirt and I would have given anything to go back in time, to go back to Mrs. Miller’s class, her incomprehensible formulas covering the blackboard. Those formulas meant something to you though and I knew you’d be leaving soon, onto better things and away from the whispers that would only get louder in the coming weeks and months.

At dusk we headed back toward town, along Route 12. It was my idea to stop at High Bridge. I still don’t know if that’s the actual name of the bridge or just what everyone called it because it was the highest bridge around. I told you the last train had already come through, on its way to Bellows Falls, but the truth was I had no idea what times the train ran over the bridge. I parked on the grass by the side of the road and turned the headlights off. You reached for my hand before I opened the door and there was so much I wanted to say to you but I didn’t know how so I let go of your hand and took the can of spray paint from the back seat.

I climbed up the metal beams of the bridge with the can of paint in my hand. For a while I could hear you screaming from the car, telling me to get down, telling me that I was going to get arrested or die. But I didn’t care. Halfway up I couldn’t hear your voice anymore, only the wind whipping through me, and the cars passing below at fifty miles an hour. I thought about the article in the newspaper: about your dad taking those pictures of the kids your mom used to babysit.

My heart pounded and my hand trembled so much I dropped the paint cap, and it bounced off the metal scaffolding on its way down to the ground. I shook the can and starting spraying. God it was so high up there, I didn’t dare look down. I wanted to write you a love letter on that bridge. But it was cold and dark and I never was any good with words.

Climbing back down was scarier than going up and I was hoping halfway down to hear your voice again but you were silent. Once I was on the ground you flicked the car lights to guide me back to you and as I got near I could hear Ani’s words spilling out the open window. I got in the car and you handed me your cigarette, the filter wet from your mouth. I wanted to eat that cigarette just to keep some part of you close to me. I kept a bottle of Jack Daniels in the glove compartment back then and I took it out and offered it to you but you shook your head and rolled up your window. I took a big sip from the bottle and tried to calm down. I didn’t want you to see how scared I really was.

I backed the car up and shined the headlights on the bridge, revealing my message to you: K + M. You took my hand and placed it on your warm cheek. I drove you home like that, my hand on your cheek, the bridge behind us, my attempt at a love letter quickly buried in the night. It’s not there anymore, hasn’t been for a long time.

Your dad is up for parole and the whole town is talking again but you’ve been gone for so long it probably doesn’t matter to you anymore. I heard you live in California now. I’m still here, still working construction. Every now and then, when I’m not ready to go home to my empty apartment, or some girl who is waiting for me there, I take the long way home along Route 12. I drive past High Bridge and see someone else’s spray-painted message and think about you. Some of them are declarations to others: Jack Loves Patty. Some are just names—Jeff or David—asking us to acknowledge they were there. I had been there once too.

Shasta Grant is the 2016 SmokeLong Quarterly Kathy Fish Fellow. She won the 2015Kenyon Review Short Fiction Contest and will be the Spring 2017 Writer-in-Residence at the Kerouac House. Her stories and essays have appeared in cream city review, Epiphany,wigleaf, WhiskeyPaper, and elsewhere. She is the author of Gather Us Up and Bring Us Home, a chapbook forthcoming from Split Lip Press.