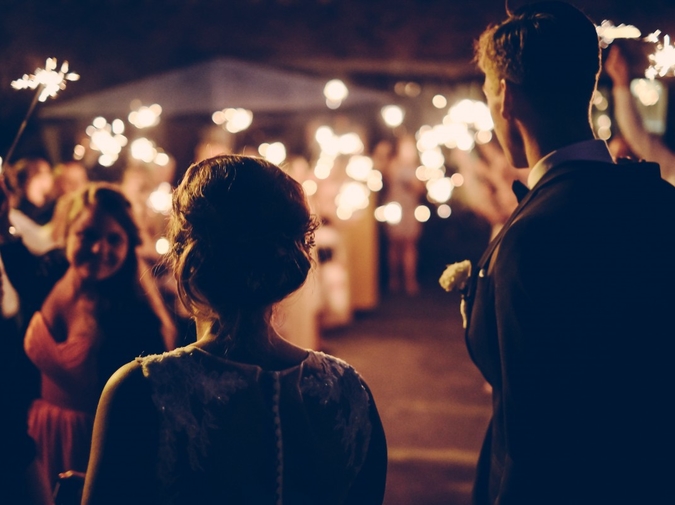 We threw a party and everyone came.

The night was prime: the moon gleamed in the sky like a fat tooth, trees only just swayed in warm wind, traffic sailed by on the five. I set out plenty of napkins. I tied balloons to the lamppost, the doorknobs. I put the cat in the bedroom and cleared a space for everyone’s coats. Emma sat in the brocade chair, crossing and uncrossing her legs, worrying the smooth face of a loose upholstery pin. I queued up Stevie Wonder on the stereo and we waited, Emma getting up every so often to rearrange the snacks.

Charlemagne arrived first. Emma and I watched from the window as he marched up our knobby sidewalk, his long fur-lined train dragged through the mush of fallen leaves. We heard the low heel of his leather shoes knock on the deck and then he barged inside. We made polite, unintelligible conversation. He set his crown on the mantle next to photo of Emma and I making kissy faces in a photobooth. He then pushed past me and buried his hand in the M&Ms, his dirty, bejeweled fingers clinking against the sides of the bowl. Regret began to pool in my stomach.

But then Ellen Wertz, my fifth grade homeroom teacher, stooped through the doorway, her hunchback brushed by a curtain of white paper streamers. She smiled and a smudge of lipstick painted itself on her front tooth. She patted my arm and said it looked as though I was getting enough to eat, then fell asleep across the loveseat. Emma draped a blanket over her and then changed into flats.

After that they came in waves.

My brother and Patty Hearst carpooled. Plato asked where he could park his bike (in the garage, I said, next to George Harrison’s skateboard). I shook hands with a wastewater surveyor from Ketchum who was speaking excitedly with Ernest Hemingway. They got along like old friends.

Before long our small ranch-style brimmed with dancing, drinking, schmoozing bodies. The party had quickly expanded into the backyard, and guests were squeezed tight around the swimming pool. Linus Pauling stripped to his drawers and executed a flawless jackknife into the deep end. I watched him float, his thin hair like cotton on the water.

We spilled out into the street. My mother, rest her soul, sat on the curb and showed a Maasai warrior how to play cat’s cradle. She spoke only with her hands. I tried to ask her if she’d seen my sister, if she could tell me what she looked like now, but my voice was drowned out by a drum circle the Navajo Nation had formed on my neighbor’s driveway. At times, the rhythmic, thrumming pulse matched up with my heartbeat, and I felt solid and powerful.

The party became a street fair became a parade became a city-wide bash. We ran out of folding chairs. We ran out of bridge mix. Someone spilled something somewhere. I left to smoke in secret and saw my wife as a child at the corner of Fourth and Wabash. I pocketed my cigarette and sat beside her, watched as she traced her initials into the mud with a fallen branch. I asked about her favorite subject in school, and she said art, but that she hated having to clean up the paints. I could hear in her voice Emma, my Emma’s, familiar cadence, the lilt, the pattern of breathing. I asked if she recognized me. She didn’t, but she said that she’d say hi if she saw me around. I said I’d like that. I sat with her a while, drifting off as she doodled in the sludge, before she smoothed out her dress, waved, and ran off towards where her remember her parents’ house used to be, still was, always is.

Shops were silent save the hum of insects, parliaments lay vacant, movie theaters and university classrooms housed only empty seats.

I walked. I watched Amelia Earhart vomit into Emma’s begonias. A slim Tibetan man held back her hair.

I kept walking. In our front lawn Emma twirled in giddy circles, her shoes in a pile near the house and runs in her stockings. She threw her head back, and sweat beaded off her hair and onto the grass.

Benjamin Kessler's work has appeared in Superstition Review, Hobart, and Portland Review. He reads for The Masters Review and lives in Portland, Oregon.