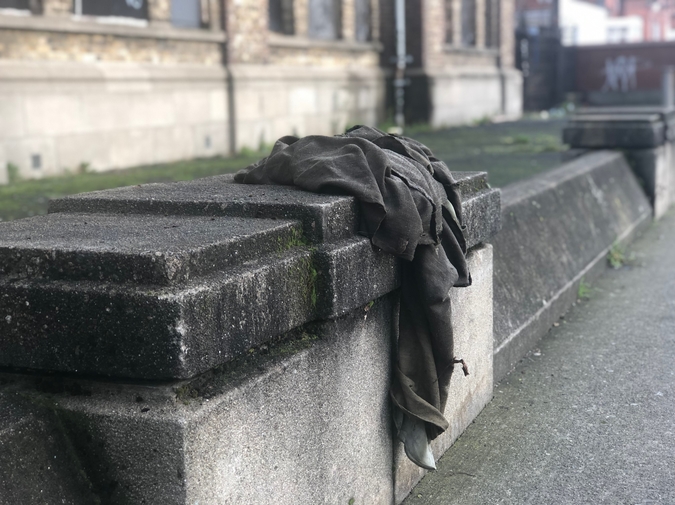 When Bill picked me up near Malibu Market, the sky was hazy in a fallout way, like after a volcanic eruption, or a bomb. Bill looked like a hundred people I’d taken rides from: flannel shirt, sunburned, open-air Jeep, someone resigned enough to take on a hitchhiker and think, if you pull a knife on me in the next mile, I can live with that.

I’d been on the road for days, coming down from Vancouver, which had seemed like an endless red-light district, all Triple X signs and adult book stores, before taking a ride in the back of an open truck bed all through the night until the stars erased themselves from the sky.

“So, why are you in LA?” Bill asked as we wound toward the ocean.

“No real reason,” I told him. I’d worked in fast food, in a fishery, construction. I had no idea what was next. I’d left a daughter in LA five years before and had some thought of tracking her down, but she was three when I left. Who would I be to her now?

Without asking, Bill drove me to his house, which was nothing like what I expected: sprawling and dated, with too much wood paneling but and with walls of glass to lean your whole body into while the ocean in the distance looked like something you could scoop up in your hands.

Bill had inherited the house from his father who’d been a record label guy in the 70’s and had turned it into a halfway house of sorts. There were three people smoking by the pool comparing OD stories. “To Narcan,” they all cheers-ed using plastic bottles of pink Vitamin Water, and then someone fell back trust-fall-style into the pool, and the pink leaked out around his face and into the water like a jellyfish.

It only took a day for me to know them. Lena was a fortune teller. Jackson was a drop-out from chiropractic school. Irey had been a yoga teacher before getting cancer and getting addicted to oxy and then heroin. “What are you?” Lena asked, and then, “I’m asking as a formality because I already know. You, my friend, are a lifelong drunk.” I didn’t argue.

We swam. We made grilled cheeses in a cast iron pan that looked like it had been around since the pioneer days. No one explained this to me, but for several hours after dinner and before dark every night, we moved boulders. In old t-shirts and swim trunks and heavy gloves, we rolled thirty-pound boulders onto gurneys and hoisted them onto a hand-cranked conveyer, rolled them to the edge of the property, and then lowered them into rows.

I spent most of this boulder-moving time hatching a plan to visit my daughter: what I would say, what I would bring, how she and her mother, my ex, might react.

“What’s with the boulders?” I asked Jackson one night.

“What do you mean what’s with the boulders?” he asked back.

“What do you mean what do I mean?”

It was going to keep going like that, I could tell.

Later I’d see pictures of Bill smiling next to the boulders in art magazines and aerial views revealing clear and intricate patterns, the Malibu one the first of many all over California, and I’d feel cheated out of something important I’d briefly been a part of. But at the time it was meditative grunt work and exactly what I needed, and, anyway, it would be years before I’d really care again about being a part of anything that meant anything.

It was almost at the end of maybe the third week when I lost my grip and one of the boulders came down on my finger and took the tip entirely off. Someone had to tell me it had happened; I was that stunned. I wrapped a sock tight around my finger to stop the bleeding and got into Bill’s Jeep where the keys were there along with a stack of the Bill’s dad’s 70’s clothes with a post-it “Sell” on the stack. I put some of the clothes on over my swim trunks, and of course, I drove straight into Santa Monica and ignored my finger which at that point I had stopped even feeling. It had been years, and who knew if they would still be living in the same place, but then there they were.

I stood at their window like the kind of person you’d absolutely call the police on. I was in the 70’s musician’s clothes—a fringed jacket with jewels sewn across the back in the pattern of a peacock—and bell bottoms that swung at my ankles. Blood had soaked through the sock around my finger and made patterns down my forearm.

Inside, there was Janelle, my ex, and she’s let her hair go natural, which looked good on her. It vibrated a little around her head in the way of an anime halo. She ate pizza quickly, finished two pieces and downed a can of something and then moved to a third piece. When we were together, she ate pizza in small bites she tore from the full piece, slowly, slowly. Juno came in the room, and at eight she was so much taller than I expected, the kind of girl who would tower over boys until they were all twenty and realized she was the one they should have liked all along. I didn’t tap on the window. It was enough to see them watching Master Chef Junior and shoveling in pizza and wiping their hands on their leggings.

Okay, then, I thought. Soon.

I dunked my hand straight into a watering can that sat beneath the window, and my whole arm jolted with pain. I walked back out into the night and to Bill’s Jeep where the clouds whipped across a completely full moon and coyotes were close but distant enough not to scare me at all.

Amy Stuber's fiction has appeared in American Short Fiction, Joyland, Wigleaf, Smokelong Quarterly, and elsewhere. She's an Assistant Flash Editor for Split Lip Magazine and is on Twitter @amy_stuber_ and online at www.amystuber.com.