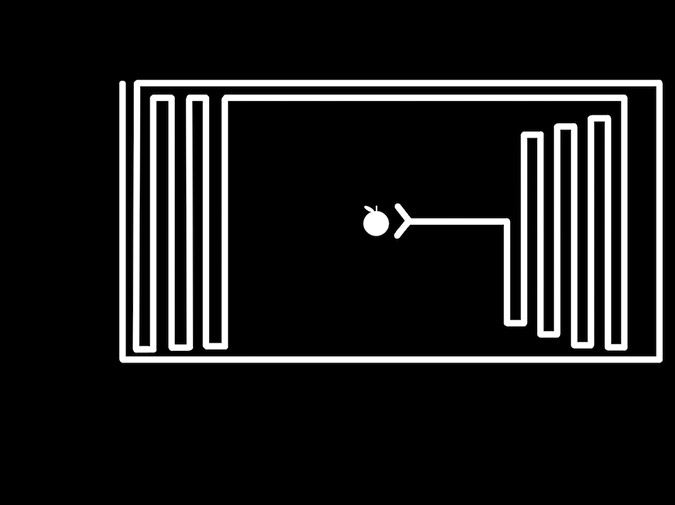 Tabitha Blankenbiller is revisiting the games of her youth, replaying them and writing semi-regular column for us. Previous installments include The Legend of Zelda: Ocarina of Time ("Fifty Shades of Lelda"), Super Mario 64 ("The Last Star"), and Oregon Trail II ("Oregon Trail's End").

I have a bad reputation with phones. Undeserved, of course. I mean, yes. I did kill my 2008 LG KE970 slide phone by dunking it into a pint of Deschutes Mirror Pond Pale Ale, but that was because I was at the bar the night after I was fired from the phone company, and the story involved elaborate hand gestures. I had nothing to do with my iPhone 3 mute button breaking, discovered when Xylophone erupted from my purse in a silent, breathless Bagdad Theater in the middle of Cheryl Strayed reading the saddest essay contained within Tiny Beautiful Things. And despite what AT&T claims, I did NOT drop my 4-day-old Samsung Note 2, fracturing the screen. At least, not until after the fracture was already there. I dropped it a week later, blossoming the fracture into a full-blown crack that spat glass shards into my scrolling finger.

As phones become smarter and smarter, my (blameless) mishaps come with higher price tags. Replacing the Note 2 was, after my screaming, contract-throwing, fruitless store meltdown, a $500 bath. Picking out the next phone to inevitably scratch, drop, dent, clog, bust, and blemish (an HTC One) was a joyless occasion the weekend after we arrived in Tucson, one that had me missing my first cell phone.

“Remember those old Nokias, the ones that were built like bricks?” I asked everyone. The 3310, those puck-like communicators that fit in a palm as cozy as a worn leather boot, with a gray original Game Boy screen and hearty buttons that clicked when you pressed them. The battery in that thing was like its own nuclear power plant; you could leave it unplugged for days and still have bars left. Not like this fussy piece of shit, needing a charge halfway through a workday of Pandora-streaming. You could run over a 3310 with a dump truck and it would still dial out.

And it had Snake, the best phone game in the universe. No app has ever come close to captivating my fingertips the way that reptile challenge did. A moment to learn, a two-year contract upgrade waiting period to master. Using a couple of buttons, steer the “snake” (a featureless bar moving at your command with the jerky agility of Pac-Man) toward the “apple” (or pomegranate, or Double-Double animal-style; the dot on the screen is tough to discern). Direct the snake into one of the screen’s sides or its own tail and the game ended, presumably with the snake gnawing through its own flesh in a horrifying case of GPS navigation gone awry. With each apple chomped, the snake grew and sped up almost imperceptibly, creating a frog-in-boiling-water slow sense of panic. I remember the adrenaline-flutter of the late levels, with nano-seconds to choose the right path or lose the shot at annihilating your high score.

Staring at my new phone with its invisible buttons and Beats audio speakers and ginormous Otter Box to protect against future hairline fractures (THAT I NEVER CAUSED IN THE FIRST PLACE), I longed for my phone from so many generations ago, a long-ago cast-off relic of a simpler time. The sureness of its weight, the neon green glow of the keys, the smooth blue Die Another Day case screened with Pierce Brosnan that I bought from the mall kiosk. This delicate “device” would never bleat a MIDI version of the “Sex and the City” theme song when a guy from Match.com called, could not fall down two flights of dorm stairs and still power on without so much as a dead pixel. It didn’t have Snake.

Between downloading Facebook, Twitter, and the Starbucks reward thing I still don’t understand how to use, I searched the app store for the classic game. Snake 97 was available for free download, complete with an interface that mimicked an old Nokia. A minute later I was staring at a tiny green-lit screen, the apple a mad-dash, split-decision away.

It wasn’t exactly the same. No token of nostalgia ever is. I couldn’t let my fingers rest on the keys at the ready, as the screen sensed my finger’s mere presence versus push. An ad for Clash of Clans flashed from where the speaker would have been. But what hadn’t changed was the sheer immersion—the addictiveness—of the game. Each loss was a temptation for another try, like a riskless slot machine. Such a close one! Try again. Fifteen, twenty minutes passed before I looked up, wondered what time it was, wondered if anyone had emailed me.

I had forgotten how blissful the escape was, especially in those first two years of college, time as awkward and fumbling as all the middle and high school I thought I was leaving behind in the Western Washington mountains. Somehow my social anxiety stowed away in my minivan, riding down I-5 to Portland alongside all my dreams of new friends, sexy adventures and an elusive boyfriend. When I ended up outside of the small private school’s clique network eating alone at the cafeteria, Snake made me look too important to care. When I tried to go on a blind date with some creeper from Yahoo! chat and got stood up at Starbucks, Snake was camouflage for a girl drowning in important communications. I was tapping too furiously to think about anything else, and in my mind, the rest of the world couldn’t see me. The Nokia wasn’t just a phone, it was a life raft. When it was in my hand, I didn’t have to worry about other people noticing me and my aloneness and notice, wonder, pity.

It’s the same purpose that each successive phone has played, right up to the HTC. I feel naked in public without my ability to seem needed, to be busy enough to blend in. Although now, instead of frittering time away on a game I’m switching between my social media apps, a constant refresh of my Facebook, Twitter, email. I’m not slipping into a mindless escape from my fears, I’m adding another layer. Instead of worrying about the people I can see judging me for being alone or out of place or my coat being too whimsical, I’m feeling bad that no one likes my new photo, or retweeted my clever observation, or replied to whatever message I shot off. Even on the few modern games I’ve downloaded, I’m interrupted by notifications and distracted by the anticipation of one arriving.

There is no true escape, just as there is no true presence. I could forget about the Nokia for hours, up until I absolutely needed to send a message or drum up a distraction. Now, even in the comfort of my house or out with friends or driving home from work, I need to know what’s new. If I’ve missed something. If someone is reaching out, responding, acknowledging that yes, I exist. Snake may have been a security blanket, but its great-great-great-great granddaughter is a slaver.

Maybe my subconscious was acting out, trying to set me free by staging these little “accidents.” Cast off your portable shackles and watch the sunset without Instagramming it! Talk to the barista instead of tweeting that she spelled your name wrong! Try a restaurant without Yelping the stuffing out of it first!

But then, how would you know I’m here?