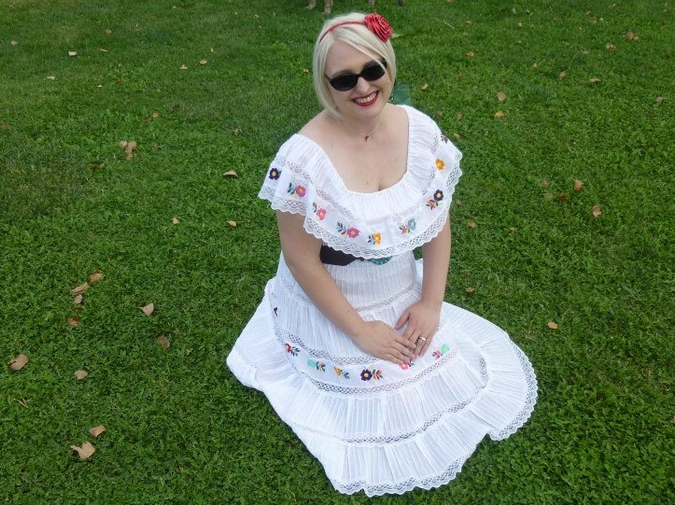 You’ve seen this dress before. Maybe on a Fiesta Barbie doll, or in a cheap forgotten movie. It is lace and embroidered flowers and an elastic neckline that slides up and down tanned shoulders. Plot shorthand for “she’s at a hacienda.” The dress was in my periphery for a lifetime before I searched for it, before I found and bought and wore it like an explanation.

I needed the fiesta dress as much as someone on a train to Berlin needs a dirndl, but in the first few months after arriving in Tucson, I was obsessed. I had to have one. I mixed and matched keywords in eBay and Etsy trying to find it: White, lace, fiesta, dress, flowers, vintage, Mexico. I scanned boutiques in the Catalina Foothills, but their idea of Western wear had a distinctly Nashville twang. Belt buckles the size of a newborn’s head, Bedazzled jeans blessing each butt cheek with the cross of our lord and savior, Jesus Christ.

Someone in this city’s got to have it, I lamented to anyone who would listen (chiefly my husband, Matt).

“Why’s it so important?” he wanted to know. I ignored him the way I ignore every question I can’t answer until two years later when I’m safe and oh-so-wise from my high-and-mighty keyboard. I needed that dress because I needed a costume. I had no other clue on what to do with myself.

I have been trying to have a conversation.

I have been trying to construct a narrative.

I have been trying to tell the story, but I can’t get it straight. One thought collapses beneath another; a thread that I know connects but I haven’t untangled how. Each account that I build holds for a breath, like a Jenga puzzle on the last round before it heaves into rubble. The footnotes tentacle and the contradictions make my sentences brittle.

Here is what I have best untangled so far: Arizona was not for me. I did not acclimate, although I like to think I tried. It feels like a year and a half is a pretty honest trial run, but I have the moments of remembering our weekends hiking between wildflowers and saguaro cactus in Sabino Canyon. Lumbering Gila monsters and tortoises, lazy with ancient blood. I miss the chile rellenos and red pork tacos served by waitresses who’d learned our names and favorites, bites we’ll never be able to replicate here, as half the intoxication was sheer magic of place. I can’t forget the sunsets that made me understand that Lisa Frank was being photorealistic on all my psychedelic school supplies.

I try to pick out the good parts. My eye falls on the prettiest shards of pottery from the wreckage of the last year, ignoring the jagged glass and dirt and vomit. I wonder if I tried hard enough, or blinded myself to something magnificent. The beauty was true, but so was the unhappiness. I felt misery rising through the abandoned storefronts and strip mall wastelands. The fast food and Big Gulps and stillborn berries sold in expensive clamshell pints, picked too young for juice. The heat that all the fans, air conditioners and swamp coolers in the region could not touch. It sank into the blood, made me slow.

I finally found the dress in a vintage shop on 4th Avenue. Fourth Avenue was another snag in my storyline—Tucson didn’t have anywhere I liked to eat or shop or hang out. Between downtown Tucson and the University of Arizona, 4th Avenue boasted an organic co-op grocer, a clothing store sending proceeds to developing nations, a pretentious brunch spot, a body-positive photography studio, a mixed media art boutique, a narrow café with open mic poetry, a tiki bar guarded by a 2-story Easter Island moai statue with flaming eyes. And a vintage store with my dreamed-up dress in my exact size, priced at $20.

“But it’s not like I can spend my whole life on one street,” I said. I say.

I wore the dress out with my coworker Charidy. Charidy is the exception to my “I didn’t make any friends” side plot. I didn’t make a lot of friends. But I made Charidy. We worked in the same office and had much in common, like not wanting to be in the office. Wednesdays with Charidy became Winesdays, Thursdays were Thirsty. Tuesdays could be Thirsty too. An alliteration exception could be made for Fridays. She was a few years younger than I was and made me feel like I was in college again. That old mission, to set out drinking until I couldn’t stand up, until parts of the night vanished like dreams in the morning.

“You look like you’re in Mexico trying to be Mexican,” she joked, and I laughed until Fireball dribbled out of my nose. I will never be able to repay her for that.

I bolted out of the state before I could say goodbye. I will never be able to apologize for that.

When I wore the dress, I was Trying. I tried Sonoran wine country where a winemaker kept a pet kangaroo because his backyard was identical to the Australian outback. I tried the All Souls Procession commemorating Dia de los Muertos, with my face painted in a flowery scrolling skull. I tried Sedona’s red rocks and homesick pines, and met with a psychic who spoke to archangels. She turned cards while I clutched quartz. “You’re going home,” she told me. “It’s all the faeries talk about. ‘Bring her to the trees. We need her in the green.’” I wore the dress to the grocery store and a little girl asked if I was going to be in a parade.

The dress lives in a box now, just as all my Oregon clothes lived in an Arizona box. There is a fashion expiration point that divides the west. I think it runs through Fresno. There were a few January days in Tucson when the temperature dropped into the fifties, and I tried wearing my collection of Northwest scarves and leggings and boots. I looked like someone in full scuba gear showing up to a wading pool. I sweated out of my accessories by noon, when the daytime high hovered around 70.

This is why I can’t tell the story of living in and abandoning Arizona, because no matter how I rearrange the details, the ending is the same.

I couldn’t take it any longer.

I couldn’t make it work.

I turned a round-trip plane ticket into a one-way. I took a week’s vacation and I never came back.

And this doesn’t square with the story I’ve built of myself for years, the story of someone who is resilient. This is my reservoir, the myth I have sculpted in my mind. I believed that I could glimmer in any darkness. I thought I could wear any costume, even if it looked stupid or itched. Smile, twirl. Be graceful. Look strong when you aren’t.

Then I tried this new life on and it didn’t fit. From this distance I can wax on contradictions, of beauty and discomfort occupying the same space, but perspective is hollow. The nuance won’t square in my head. I know I should be proud that I identified what didn’t work for my heart, and eradicated such unhappiness before it grew cancerous. This is what I can say on the page. What I will tell you to your face is this: I failed. I was cowardly and brittle. I was everything I know about myself but don’t say, and I learned the truth I cannot speak. That I can’t dress the part for belonging.