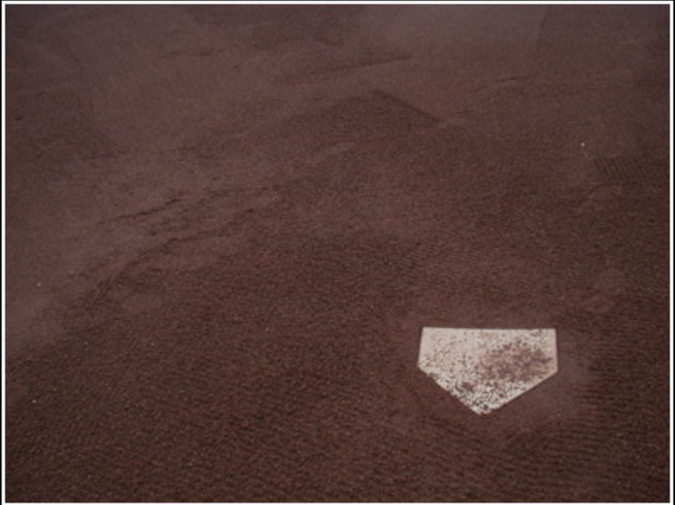 Where are my hands? I'm running weird. Why do I always run so weird? Shoulders back. That guy's an asshole. Don't go to wide. Hit the bag. Don't trip. Head down. This is so weird. So loud. Do I always run like this? I feel like I don't always run like this. Are my hands like this? I'm doing the weird straight hand thing. I hate that, close your fists. It's not nineteen oh you weirdo I can't believe you were doing the wind-resistance hands like a weirdo. Oh man that's going to be on ESPN, someone's circling that with technology. Technology? Someone's circling it with technology? You dope. Head down. Head down. Everybody's looking, they're going to call you Wind-Hands. Dummy. Tag the bag, Wind-Hands.

This is the worst. That lady can see my helmet rattling. I think I grabbed the wrong helmet. Can't get a good helmet to fit my weirdo head. Wind-Head. That'd be a better name. Wind-Head. They shouldn't make you play the field after you hit a grand slam. You should get an inning off. That should be a rule. There's so many rules, that should be one too. I should be able to sit down and forget about it for a bit. Go take a shower or something. My right foot just hit my thigh. How? How do you allow that to happen? That means you're barely moving forward. You're mostly running in place. Why do I always look so weird? I should quit. Oh man, why is the third base coach clapping? I hate that guy. That's so clearly a sarcastic clap. Don't think I can't recognize a sarcastic clap when I see it. Not my fault the game passed you by, Old Man. I missed one practice. I was sad. Not my fault. Read a newspaper, Old Man! Old man. The world is bigger than this little game. What about Darfur, coach? You ever think about that?  You insensitive Old  "Thanks coach!" What a piece of shit that guy is. I wonder how many toilets this place has, probably more than you'd think, probably if I set a number it'd probably be way higher no matter what number. Unless you were being a dick about it and said way too many. You couldn't say a million or something. Like a thousand probably. Oh right. Home run. Tag the bag. Tag the bag. It's almost over.

Oh Fuck. The handshakes. Ramirez is forearm bash, then handshake then helmet sm— no no no. Albertson is helmet smack. Rameriez is the forearm bash, then slide down to the handshake. Albertson is helmet smack shoulder pat. Or wait. Is it shoulder pat and then helmet smack? But if he's shoulder pat then who's head butt? Christ. Was Olsen Head butt? I think Olsen is head butt. No wait, Olsen Head butts Albertson. That's their thing. Because of that thing with that chick. I know Stevenson is thumb wrestle handshake, bro hug. That's easy. Olsen should be more like Stevenson. I think the third baseline is crooked. That's probably a good job though. After hours. Quiet. Christ, look at these meatheads. They're all going to beat me up. They think it's celebrating, but it's just a caveman shoving circle. Looks like that scene in 2001. No self control. It's just abuse. I just hit a grand slam for fuck sake. I should get to call the celebration. I should get a cup of tea and then an inning off and nobody talks to me for three hours. Four hours. That should be the celebration. God damn it — Albertson has his forearm up. What if I slid? What if I slid to be a dick? That would be funny, right? No. That's not funny. But I'd be on the ground, which would be nice. Nobody would know what to do, I could avoid the whole thing. Slide and then get up and run to the dugout. Why is everyone hopping up and down? What's that do? What if someone got injured doing that. Oh man, what if I fake an injury. Look how happy they are to beat me up. What a bunch of goons. To be fair though, it is pretty exciting. Am I second guessing my own second guessing? Would that be third guessing? I probably look regal. I can be handsome when I want to be, right? Not God's gift to anything but, I do have nice shoulders. Not great shoulders, but good. Listen to yourself. Shoulders? You're such a dummy. Might as well goon it up, dummy. Maybe you'll get hurt. Maybe one of these goons will hurt you and you can take a vacation for the rest of the season. Sleep in. Oh man. Sleeping in. "Hey assholes! Who needs headbutt? I am the strongest man in the world!"

Dan Sanders lives and writes near the lake in Oakland. He's recently contributed to Invisible City Audio Tour'sHeliography and was featured in the December 2010 Hobart. Mr. Sanders also ghost-wrote a book about flowers that was sold on QVC. Mr. Sanders didn't then, and doesn't now, know anything about flowers. He winged it.