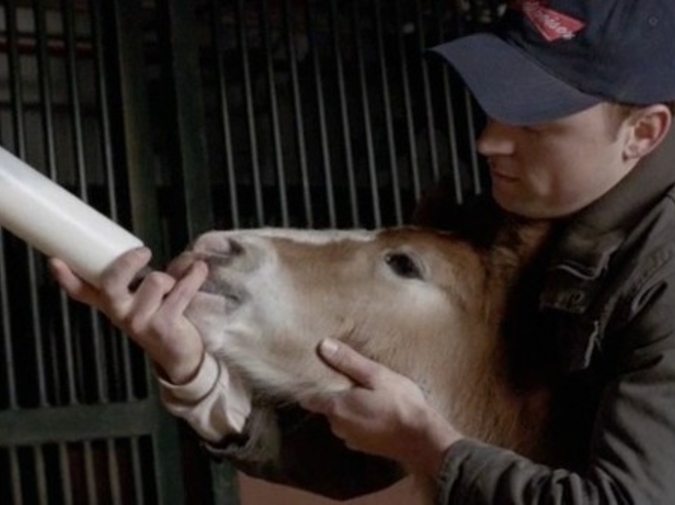 The man woke up and walked to the bathroom. He relieved his bladder and looked at himself in the mirror. He looked at the clock. 6:25. He could either go back to sleep or head down to the basement to do P90X. If he waited until later, there was a chance he would forget, or, more likely, would be too tired to even change into his workout clothes. He crawled back in to bed and got under the covers. He would try to do P90X in the afternoon, maybe even at lunch. For right now, there was a warm bed.

Boy, he thought, I sure do miss that horse.

The man boiled spaghetti and opened a can of tomato sauce. Organic. A full dollar fifty more than the usual kind. He wondered if he would even notice. He wondered if it was too late to be thinking about making that kind of a switch. He had grown up on antibiotics and pesticides, Cheez Whiz and pop-tarts and Oscar Mayer wieners.

He wondered what that horse was doing now, how his foot hair was coming along. He had tried to groom it, but had never had much luck. And there must be a better word for it than foot hair, right? Surely the Budweiser people knew. This was another difference between them, an example. He took out the notebook that he kept in the back of his pocket, the one labeled REASONS.  “I don’t even know what that foot hair is called and I bet they do,” he wrote.

The man turned on the television. The Three Stooges. Curly hit Moe in the back with a frying pan. Funny, the man thought, how much it looks like assault with a deadly weapon now.  He remembered a thing the horse used to do, pushing at his back while the man was readying his oats. That was some horse, he thought. On the television, Larry and Moe floundered in a swimming pool while Curley paddled a little canoe around the periphery, dropping rocks on top of them.

The man sat down at Chili’s and ordered a cheeseburger. He had forgotten to bring a newspaper or a book. He thought about going outside to get a paper, a free weekly, real estate listings, whatever, but he worried that the waitress would think he was running out on the tab. He read the placemat. “Wild West Nachos!!!” it read. There was a picture of a cowboy and a horse.

The waitress came to fill his coke and the man shook his head and smiled like he and the waitress were in on some kind of joke. She ignored him, filled his coke, and clacked away toward the bar.

The man checked his phone but there weren’t any messages. He ate half his cheeseburger and went to the bathroom. When he came back, the waitress stopped by to ask him if everything was okay. “I tell you what…” he said.

“Everything okay, sir?” the waitress asked, raising her voice.

He pointed to the placemat. “Reminds me of this horse,” he said. “One I was training for the Budweiser people. The Clydesdales.”

“Our beef is one hundred percent grade A certified angus,” the waitress said. She sounded like she was reading something off a cue card. “You want to talk to the manager that’s him over there.”

“Oh no,” the man said. “I just mean this picture. Reminds me of this horse.”

“You let me know if you need another refill on that coke,” she said.

The man had a beer and read the newspaper. There was a story about the Clydesdales coming to a nearby city. “Well I’ll be,” he said.

He drank three more beers and took the empties out to the barn. He set the bottles in a row and gathered some rocks into his pockets. He wound up like a baseball pitcher and threw. He knocked over the first bottle and danced a little jig. “Not bad, huh?” he said. He turned to the stable, but then he remembered that it was empty.

He knocked over the rest of the bottles, one by one, and then went back inside.

The man went to the tax place in the mall. The tax preparer was a young guy, Latino, wearing Dockers and a tie. “So you haven’t worked for a full year?” he said.

The man nodded. You could really hear the guy’s accent, he thought, when he said the word “year.”

“The last time you worked was for…Budweiser?”

“I was training this horse,” the man said.

“A year ago then?” the tax guy said. “Nothing in this last tax year?”

“He was a pretty cool horse,” the man said.

The tax guy nodded, tapped something into his computer. The printer starter to whirr. “We’re all set here,” he said.

The man went to see the Clydesdales in the nearby city. There was some kind of parade. He wasn’t sure what it was for, or why there’d been an article about it in the paper, but he was happy to have something to do. He was happy that he might have a chance to see the horse again.

He took a spot on the street near a family with twin girls in matching dresses and pigtails. Every now and then somebody threw candy from a float and the girls would skitter across the street to gather up lollipops or tootsie rolls. He ate popcorn from a paper cone. He drank a coke. He watched marching bands and politicians he didn’t know riding by in classic cars. They waved and he fought the polite urge to wave back.

Finally, the Clydesdales came into view. He was pretty sure he knew which one was the horse. If he was right, they had definitely done a better job with that foot hair stuff, whatever it was called. The horse looked bigger. Businesslike, if that made any sense. The horse looked like a Clydesdale.

The man watched the Clydesdales pass. A fire truck came along next. Then a few more marching bands. His feet were getting sore. He thought about the drive home. He found his pickup, paid for his parking, and made his way along the crowded city streets. He made a right onto the Eisenhower Expressway and watched the city roll by in his window. So many people. From Eisenhower he got on 88 west and the traffic loosened up. He increased his speed. He was looking forward to getting home. That was some horse, he thought.